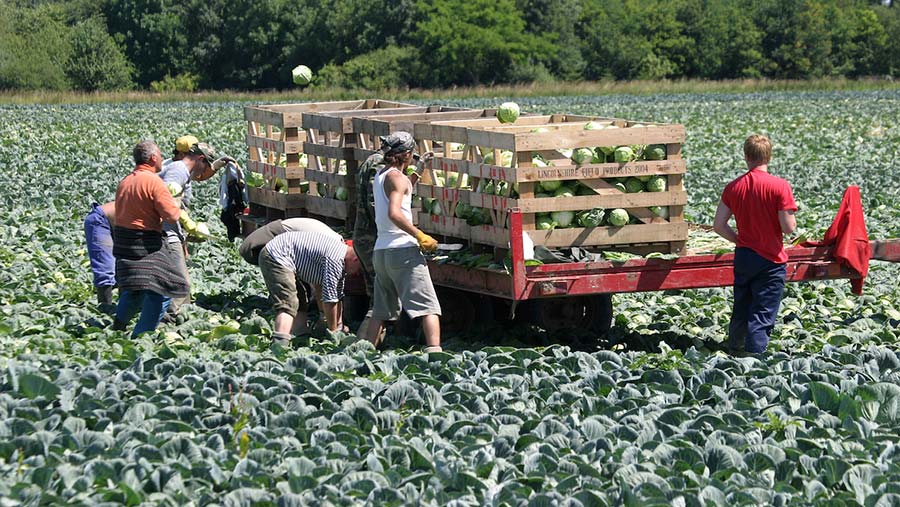 Defra secretary George Eustice says he is considering changes to the Seasonal Agricultural Workers Scheme (Saws) as a way of bringing in much needed labour to help the beleaguered agri-food sector.

Visiting the Balmoral Show in Northern Ireland on Thursday (23 September), he told journalists there were particular concerns about how to deal with a spike in demand for food in the weeks running up to Christmas.

“We have Saws and we’re looking at options as to how we can change the focus of that and we hope to be able to say something on this shortly,” the BBC reported Mr Eustice as saying.

Transport secretary Grant Shapps also told the BBC that he had not ruled out changes to visas to address workforce shortages.

“If that was actually the solution, I’m sure we would move to it quickly and I don’t rule out anything,” he said.

The comments from cabinet ministers came after a letter was sent by the NFU and 11 other industry bodies to prime minster Boris Johnson demanding both short-term and longer-term action to address the labour crisis in the food sector.

The Association of Independent Meat Suppliers has also asked government to look at the types of English language tests applicants for Skilled Worker Visas need to take.

It suggests the Home Office introduces a two-tier system, such that butchers and poultry processors are only assessed on their ability to speak and listen, as opposed to their reading and writing ability, as is currently the case.

The labour shortage had hit agriculture hard in recent weeks, with all sectors affected.

At harvest, some farmers were forced to leave their grain outside on concrete pads as there were not the lorry drivers available to haul it to central stores.

Sugar beet growers have also been warned to expect to be delivering more of their own beet to the factories this season, as the lifting season gets under way.

The meat sector, meanwhile, has reported a 15% labour shortage – leading to reduced factory throughputs and an alarming build-up of pig numbers on farm.

The dairy sector has also seen sporadic instances of milk not being collected from farms due to tanker driver shortages.

The delivery of inputs to farms is also being affected, according to the Agri-Supply Coalition, representing nine supply trade organisations.

“Some delays are frustrating in terms of delaying operations due to late arrival of spare parts or arable inputs,” said coalition co-ordinator Robert Sheasby

“But others – such as the supply of animal feed – can lead to welfare issues, while perishable produce can be lost. These look to get worse as we go into the winter.”

British workers not up to the job

The problems of recruiting UK staff to work in the horticulture sector have been spelled out in a new survey from NFU Scotland.

Carried out by policy manager David Michie, it failed to find any farm that had had a positive experience when recruiting UK staff.

It did find that:

“Scotland’s horticultural businesses have been on the front line of this crisis for two years now,” said Mr Michie.

“Brexit has meant an end to freedom of movement for EU workers. This barrier has been stacked on top of major Covid-19 barriers, and a migrant workers’ visa scheme that has not worked well for our members.”

Without those workers, self-sufficiency would suffer and food would rot in the fields, rather than make it to the nation’s plates.