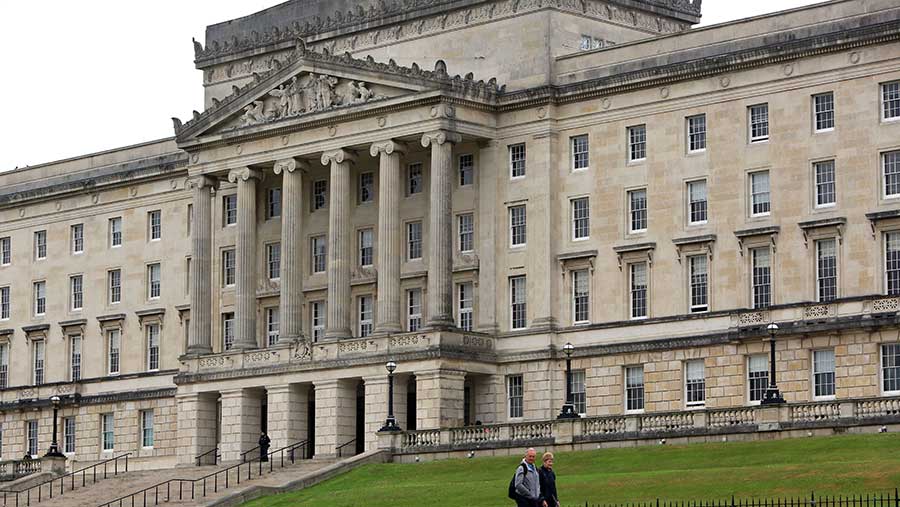 The lack of a devolved government in Northern Ireland means that challenges and opportunities facing farmers there run the risk of being overlooked, according to a parliamentary committee report.

The House of Commons Northern Ireland Affairs Committee says the UK government must do more to explain how policy for farmers and growers in Northern Ireland will be devised in the absence of a functioning executive, which collapsed in January 2017.

MPs said they were concerned that Defra’s consultation on post-Brexit agriculture policy did not look in detail at the sector in Northern Ireland.

See also: NI farmers given say on future of farming

Although the NI Department of Agriculture, Environment and Rural Affairs (Daera) published a consultation this summer on the future of policy, without a minister to lead proceedings progress had stalled, the committee said.

The report pointed out that farmers in Northern Ireland were, on average, more reliant on direct payments than their counterparts elsewhere in the UK.

Applying Defra’s policy plans for England, which include phasing out direct payments by 2028 and introducing a system of “public money for public goods”, would mean many farms would become unsustainable, it warned.

“We urge the responsible department to ensure that the definition of “public goods” it uses when considering future agricultural policy [in Norther Ireland] includes the survival of farms as essential rural assets.”

The report said reaching an agreement had to be prioritised to enable cross-border trade with the Republic of Ireland to continue on the most frictionless basis possible.

Almost £900m worth of food and live animals were exported to the Republic of Ireland from Northern Ireland in 2017.

The government should also offer clarity to agri-food businesses as to how cross-border trade might work in the event of no deal being reached between the EU and UK.

“Northern Ireland, the Republic of Ireland, the United Kingdom and the European Union will each lose out if cross-border trade is disrupted as a result of the UK’s withdrawal from the EU,” it warned.

Dr Andrew Murrison, the chairman of the committee, said the UK government had to provide clarity and confidence to the NI agricultural sector.

“We were left with the impression of drift and delay at a critical time and an over-reliance on the much-hoped-for restoration of an executive,” he said.

A Defra spokesperson said:  “We are in close contact with counterparts in Daera on the implications for farmers as we leave the European Union, including fortnightly meetings at an official level.

“We also fully recognise the differences between the needs of Northern Ireland’s agriculture sector and that of other parts of the UK. That is why we support and embrace the principles of devolution.”