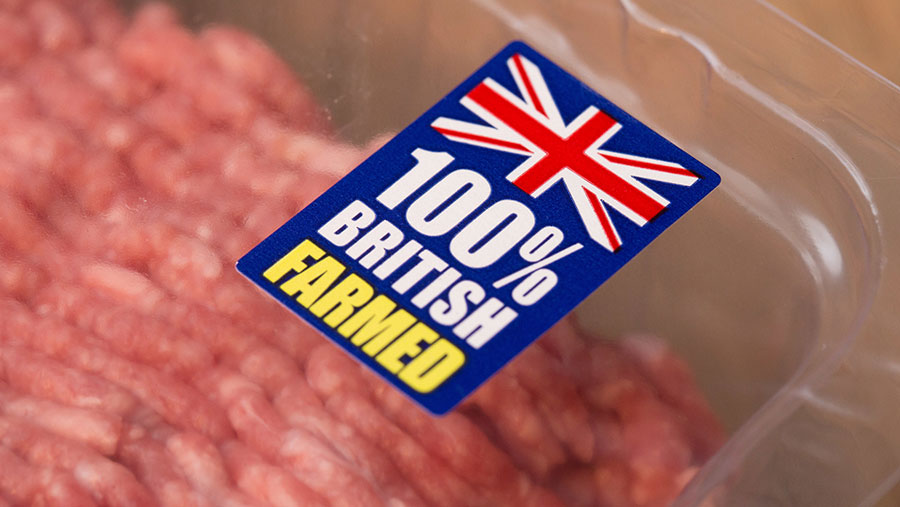 Farm leaders are calling for parliament to be given the final say on new trade agreements – and whether they should be ratified.

The NFU made the plea on Back British Farming Day – held this year on Wednesday (9 September) – as it urged MPs and peers to sign a pledge to support UK agriculture and wear wool and wheatsheaf pin badges in Westminster.

NFU president Minette Batters said: “We are at a pivotal time for the future of farming and the food on our plates.

“Nothing will determine this more than how the government shapes trade deals with countries around the world.”

See also: Priti Patel gets behind Back British Farming Day

Speaking as the government’s Trade Bill was debated in the House of Lords, Mrs Batters said she hoped peers would amend the bill so parliament would have the final say on whether to ratify new trade agreements.

There is no current requirement for parliament to debate trade agreements before they are signed into law.

And the NFU argues that any safeguards to allow MPs to reject such deals are limited, increasing the chance they could disadvantage British farmers and consumers.

The NFU also wants parliament to be provided with independent advice about the impact every trade deal will have on British food and farming standards before deciding whether to accept or reject any proposed agreement.

Justifiable fears remain that the UK will start to allow imports of food produced to standards lower than those met by British farmers, according to the NFU.

Substandard food imports remain a big worry for the British public, according to an NFU report published to coincide with Back British Farming Day.

It follows a petition signed by more than one million people against food imports that would be illegal to produce here.

Rules on farm practice ensure that British food is among the safest in the world and consumers can buy with confidence, says the NFU.

A trade policy that fails to guarantee that imports meet the same standards will undermine this confidence, it adds.

It says they benefit animal health and welfare, encourage a better environment and help to combat modern slavery and human exploitation in other parts of the world.

An amendment to the Agriculture Bill, proposed by Lord Curry of Kirkharle, would give this duty to the new Trade and Agriculture Commission, set up by the government in July.

This amendment is likely to be debated by the House of Lords next week.

Mrs Batters said: “There is now a clear solution on the table that will allow parliament to be kept fully informed of the impacts any trade deal will have on the food we all consume.

“Time is running out. Action has to be taken now or all the warm words will be for nothing.”

Back British Farming Day was an opportunity to celebrate the public’s trust in British food and the farmers that produced it, added Mrs Batters.

“Our farm-to-fork approach to traceability, how we look after our animals and our environment, and how we lead in reducing antibiotic usage are all the envy of the world and yet they are in jeopardy if they are undermined by future trade deals.

“I would urge all politicians to use today to think about these values, and what we have to lose.

“I would ask them to set British farming as the global standard in sustainable, climate-friendly food production, and not undermine it in the pursuit of free trade.”

Defra secretary George Eustice has repeatedly asserted that the government not compromise on the UK’s high environmental, animal welfare and food safety standards as it seeks to secure trade agreements with other countries.

The government says its recently launched Trade and Agriculture Commission will ensure high standards are upheld and farmers are can seize new export opportunities.

It says this will help UK agriculture to be among the most competitive and innovative in the world.

What farmers want from the government

Trade deals
“I do not trust he government because of so many U-turns over Brexit. I want assurance that any deal made with the US over importing food is sustainable and meets UK standards. We cannot have cheap food coming into the country that undermines our hardworking farmers.” – Glenda Attwood, Kent

Food standards
“The prime minister should stop listening to the left-wing media and focus groups who pretend to be environmentalists and listen to hardworking farmers instead. Let us get on with producing food for UK consumers – we know we can produce it to a high standard and quality.” – Colin Rayner, Berkshire

Family farms
“We must do more to stop these big, multi-million-pound enterprises from gobbling up farms. If you cannot make a living as a family farming 120-200ha, that’s not right. Young farmers are also being priced out of access to rented land, which is one of the biggest barriers to getting started.” – Basil King, Cambridgeshire

Bovine tuberculosis
“They say bovine TB advances two miles every year. It is moving further up the country. We should be asking whether now is the time to legislate that all cattle moved from high-risk to low-risk areas should go into an approved finishing unit.” – Rosey Dunn, North Yorkshire

British food
“Can you please encourage more procurement of our own products in schools? I would like to see more promotion of agriculture in the national curriculum to help young people understand where their food comes from and get more interested in food and farming as a career.” – Abi Reader, Glamorganshire

Food imports
“We need a level playing field. If we are importing foods that fall below our standards, or farmers are being subsidised and able to produce it cheaper, that’s not a level playing field. We also need a fairer share of the profits so that it doesn’t all go to the supermarkets. – Adrian Ivory, Perthshire

Five-year plan
“I want to know where we are going? Can the prime minister give us an idea where he sees agriculture in five years’ time? Does he want us to produce food here in the UK, or be a completely free, open marketplace where it’s just the markets that dictate where the food comes from?” – Bill Mellor, Cheshire

Food security
“I would ask what the government is doing about food security and seek reassurances on that – it is a key issue to us. Especially in a recession, there might be a time where we can’t afford to buy in food. They need to regulate trade.” – Sam Newington, East Sussex

Young farmers
“We want to see some kind of easily accessible loan for young people wanting to farm but without land or livestock to inherit. You need capital to invest in getting started on your own and if you go to the bank and ask to borrow to buy livestock, the answer won’t be yes.” – Zoe Colville, Kent