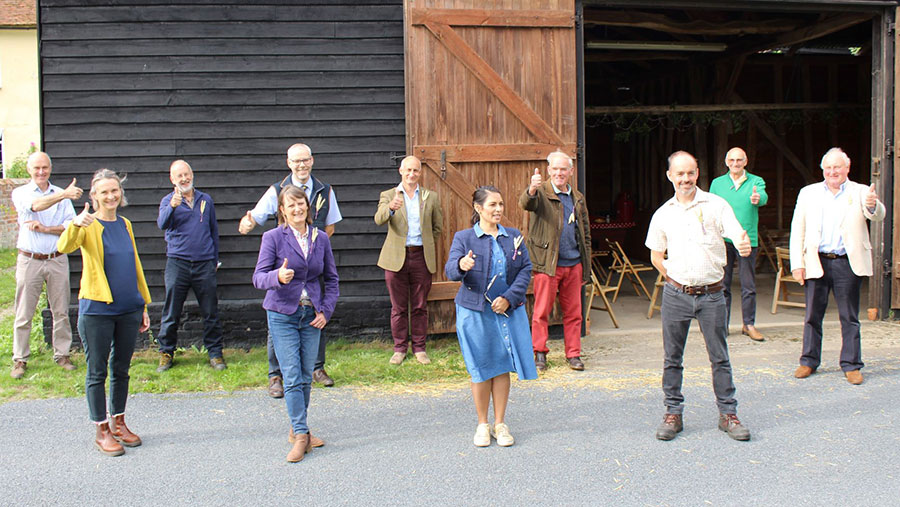 Priti Patel has shown her support for farmers in Essex and across the country by endorsing the NFU’s Back British Farming Day.

The home secretary and Conservative MP for Witham met local farmers at Dagnetts Farm in Black Notley on Friday (4 September), where she took part in a Q&A session.

Ms Patel listened to farmers’ concerns about the effect of the coronavirus pandemic on their businesses, rural crime, a shortage of seasonal workers, the future trading relationship between the UK and EU, and the new green schemes the government will be introducing to replace the EU’s Common Agricultural Policy.

She paid tribute to UK farmers for their hard work during the pandemic to feed the nation.

“Our farmers in Essex and across the country have worked incredibly hard during the pandemic to keep providing the food our country needs and events like these remind us all of how important farmers are to our everyday lives,” said Ms Patel.

“As the country starts to recover from the pandemic, I was pleased to catch up with some of our county’s farmers about the hard work they have been doing.

“With the EU transition period and our involvement in the disastrous Common Agricultural Policy finishing at the end of the year, we have a new opportunity to transform our food production and I was delighted to discuss the future of farming with local farmers and the NFU.”

Ms Patel urged everyone to get behind Back British Farming Day, which takes place on Wednesday (9 September).

“Food produced in Essex and Britain is the best in the world and I hope everyone will show their support for our farmers on Back British Farming Day,” she said.

Politicians will show their support for British farmers by wearing wheat-pin badges made from home-produced wheat and wool at prime minister’s questions and throughout the day on Wednesday.

A number of cross-party MPs have sent messages to Farmers Weekly in support of British farmers and Back British Farming Day.

Carla Lockhart, DUP MP in Upper Bann, said “Back British Farming means ensuring the right support and framework is in place for British farming to succeed.

“To ensure profitability for farmers, but also by protecting, not undermining, the high standards that our farmers work to. And just like everyone else, it also means buying British produce.”

Labour MPs urged the government to legislate to ensure British farmers will not be undercut by cheap food imports in any future trade deals with the US and other countries.

Daniel Zeichner, shadow Defra minister and Labour MP for Cambridge, said: “British farming is at a crossroads – at risk of being undercut by imports produced to lower environmental, health and welfare standards.

“Now is the time to stand firm, give our farmers a big vote of confidence and keep Britain farming.”

“With so many farm businesses under pressure, allowing cheap food produced to lower standards abroad into the UK could finish many farms off,” he said.

“That is why I am not only backing British farming today, but I will continue to push for a change in the law to protect our rural communities.”