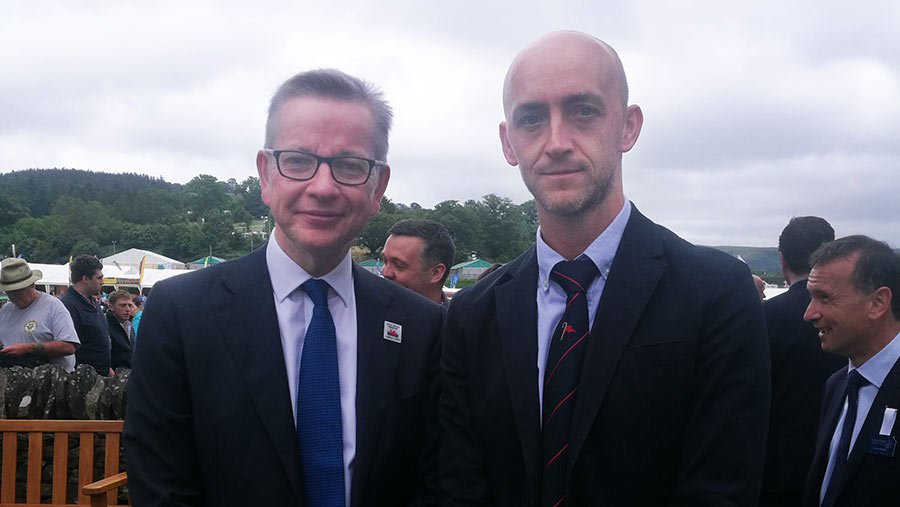 Defra secretary Michael Gove remains convinced that the UK will leave the European Union with a deal.

In 2017, on his first visit to the Royal Welsh Show as minister, he confidently predicted that the UK would leave with a deal because it was “in everyone’s interests”.

However, Boris Johnson is widely tipped to be named as prime minister today (23 July) and he has vowed to leave the EU “come what may” at the end of October – prompting fears of a no-deal Brexit which farming organisations say would be catastrophic for the industry.

See also:  Plan to abolish farm subsidies could be delayed

When asked at the show on Monday (22 July) about the prospects, on a scale of zero to 10, of the UK still leaving the EU with a deal, Mr Gove said emphatically: “Ten!”

The minister said he would also like to keep his job as Defra secretary, amid speculation in the national media that he will be promoted to Northern Ireland secretary in a Cabinet reshuffle later this week.

Mr Gove was speaking to Farmers Weekly at the 100th Royal Welsh Show. Here is the full transcript of the interview:

Do you think you will still be in the same job next week? We have heard that Zac Goldsmith MP may be replacing you as Defra secretary.

I don’t know is the honest answer. I hope I am still in this job, but I don’t know. We’ll all find out on Wednesday and Thursday. Zac is a very, very good friend of mine. He’s a very talented guy and any government with Zac in it would be a stronger government. But I hope that I get the chance to stay in this job.

Do you think that a no-deal Brexit would be good for farmers?

No. I think it would be better if we got a deal. I have explained in the past some of my concerns about leaving the EU without a deal. But we’re working on specific steps to mitigate the impact of any such outcome.

How confident are you that the £3bn pot UK farmers currently get from being members of the EU will be matched by the government post-Brexit?

We pay more into the common agricultural policy (CAP) than we get out. So once we have left, we will be in a position to generously fund and support farmers.

But we are going to change the way we support farming. To be fair to the Welsh government, they have produced some very interesting work on how to better incentivise Wales’ farmers – not just to carry on producing high quality food, but also to improve the environment and provide other public goods. And we (England) will be following a very similar path as well.

Do you think the Welsh government will be taking the lead from Westminster?

I have to say that we find relations between the Welsh government to be very good and very harmonious. Lesley Griffiths, as minister, is someone whom I enjoy working with. We don’t agree on everything. I do think that the latest proposals that are being put forward, they are specific to Wales, but they have much to recommend them.

People will see that when we publish our own proposals, there is a significant degree of similarity. Although obviously these are two governments, led by people from two different parties.

What do you think is the best aspect about what Welsh government is proposing?

I think to take one thing out would be unfair because there is a lot that we are going to be saying about the future of farm support overall very shortly. People will be able to see where there are areas of significant overlap, or one or two areas of difference.

Two years ago at the Royal Welsh Show, you reassured farmers that a Brexit deal with the EU would be done. How confident are you now, on a scale of zero to 10, that we will get a deal?

Ten! Sooner or later, there has to be a deal.