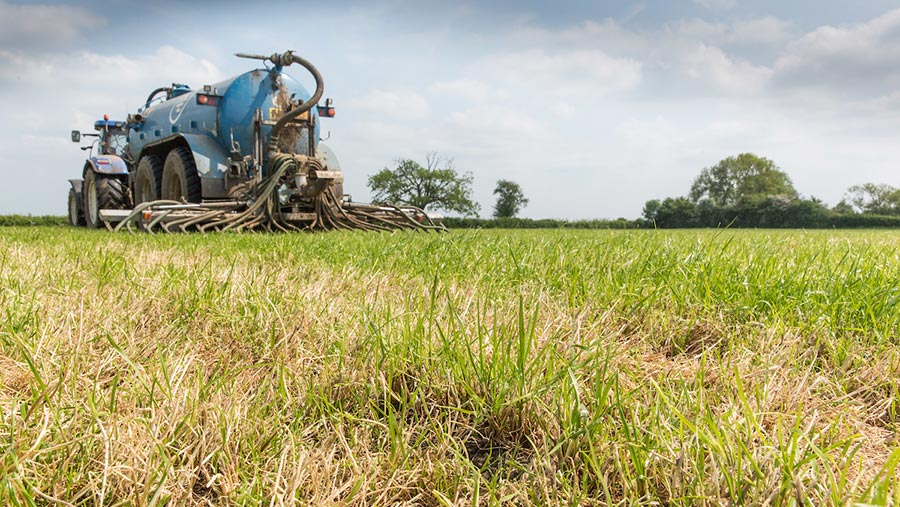 Farming unions say they are astonished after the Welsh government published draft regulations for an all-Wales nitrate vulnerable zone (NVZ) while the country is gripped by the coronavirus epidemic.

The Welsh government says making the whole of Wales an NVZ is necessary under the EU Nitrates Directive to protect watercourses following several pollution incidents caused by slurry spreading.

Welsh rural affairs secretary Lesley Griffiths said she is “minded to introduce the regulations once the crisis comes to an end”, as part of her Covid-19 response statement issued on 8 April.

Both NFU Cymru and the Farmers’ Union of Wales (FUW) have hit out at the timing of the announcement, warning that the plans would cost farmers hundreds of millions of pounds and increase their levels of stress and anxiety.

“It will affect every farmer, every sector and every area of Wales.

“Farmers will be subject to draconian record keeping, complex restrictions on the day-to-day running of their businesses and, for many, exorbitant costs at a time when farm business incomes do not support this level of investment and when the industry is going to need significant time to recover from Covid-19 impacts.”

NFU Cymru is advocating a voluntary approach to NVZs and it wants the Welsh government to develop a framework that enables farmers to take action to improve water where needed.

It accepts that a regulatory backstop may be needed, but “must be evidence based, proportionate to the risk” and targeted to areas where water quality improvements are needed.

FUW said the Welsh government appeared to have ignored the advice of official government advisers Natural Resources Wales (NRW), which has warned that a regulatory approach could have the perverse outcome of making pollution worse.

“The draft legislation, if introduced, would designate the whole of Wales as an NVZ, an area more than 40 times bigger than the current Welsh NVZ area, and 11 times bigger than what was recommended by NRW,” said FUW president Glyn Roberts.

He added: “Given the severe warnings by NRW and expected crippling costs for Wales’ farming industry that would run into hundreds of millions at a time of extreme uncertainty due to coronavirus and Brexit, this issue warrants a comprehensive assessment.”