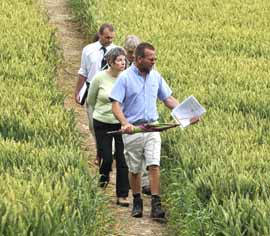 The number of farm inspections could be cut for farmers with a good record of compliance under government plans to cut red tape, according to a government report.

DEFRA has set out its plans to implement an “earned recognition” approach to farm inspections to reduce unnecessary regulatory burdens on compliant farmers.

Earned recognition was one of the key themes in the Farming Regulation Task Force report in May 2011, which made over 200 key recommendations to government on how regulatory burdens could be reduced.

Under the plans, farmers and businesses that have demonstrated a “strong track record of reliability and adherence” to high standards for on-farm inspections will earn recognition.

Although DEFRA said this does not necessarily mean a reduction in the total number of on-farm, it will improve unity between inspecting bodies and target those who have historically shown a greater risk of non-compliance.

In July, DEFRA, the NFU and representatives of other farming organisations hosted an Earned Recognition Summit for Farming to explore wider opportunities for how farmers and food processors can demonstrate adherence to high standards, and therefore earn recognition.

Following the summit, DEFRA revealed details of its streamlined approach to farm inspections in a report published on Friday (30 August) – Earned Recognition Plan. The new approach is being applied as early as this autumn.

For example, the Animal Health and Laboratories Agency (AHVLA) carries out around 8,000 inspections to check compliance with EU marketing regulations for eggs.

The AHVLA will trial an earned recognition approach to farm inspections this autumn, based on historic compliance rates for farmers. This approach will “reduce the frequency of routine inspection visits to around one inspection a year”.

Local authorities carry out around 13,000 animal feed inspections per year, but DEFRA wants to reduce this figure to 5,000, the report states.

The report states a “potential for applying an earned recognition approach” to these inspections, which are carried out using a “risk-based approach”.

The EA is working with Red Tractor assurance to trial access and use of data for two pilot counties – Nottinghamshire and Oxfordshire. The outcomes of the pilots will be reviewed this autumn.

Meanwhile, the agency is scoping how earned recognition could be implemented into water abstraction licence inspections.

A report by the National Audit Office (NAO), published in December 2012, concluded farm inspections cost taxpayers too much money, were not streamlined or joined up enough and were a burden to compliant farmers.

This current coalition government has repeatedly stated its intention to reduce the burden of red tape on food and farm businesses.