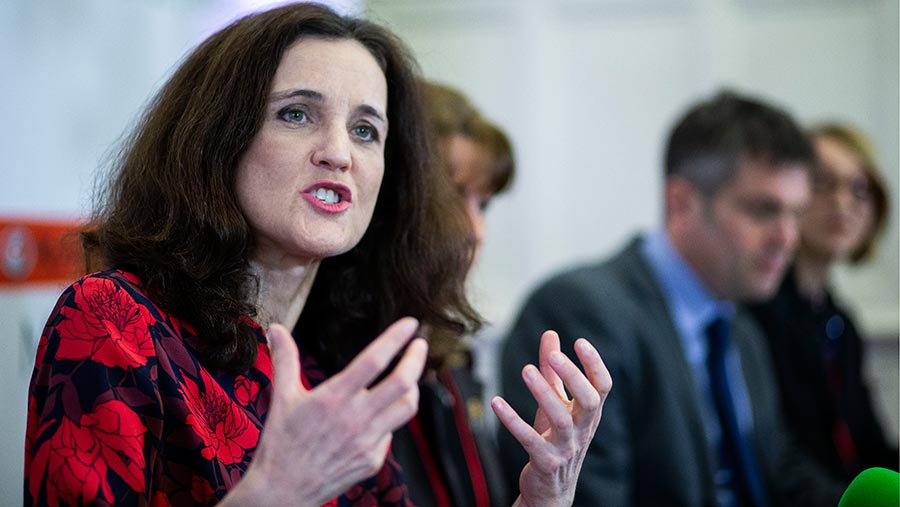 Defra secretary Theresa Villiers has pledged that no chlorine-washed chicken or hormone-treated beef will be allowed into the UK under any trade deal with the US.

Ms Villiers made the promise during a television interview for BBC Countryfile in a bid to end speculation over the issue.

“There are legal barriers to the imports and those are going to stay in place.”

The government would hold the line in trade negotiations with the US, which is a major producer of both chlorine-washed chicken and hormone-treated beef, she added.

“We will defend our national interests and our values, including our high standards of animal welfare,” Ms Villiers said.

Her comments follow a less-than-convincing keynote speech at the Oxford Farming Conference (OFC) on Wednesday (8 January).

The NFU wants a legal guarantee that British farmers will not be undermined by a flood of imports produced using methods that would be illegal in the UK.

It says British animal welfare standards must not be undercut by shipments of chlorine-washed chicken and hormone-treated beef – both of which are illegal to produce in the UK.

NFU president Minette Batters said: “We must, once again, recognise that there is nothing more important to our economy, our health and the environment than the very food we eat.”

The NFU wants the government to set up a food commission to hold legislators to account on standards after the UK leaves the EU.

Ms Villiers pledged instead that the government would stand firm in trade negotiations to ensure future trade deals lived up to the values of UK farmers and consumers.

She added: “We can maintain, and indeed enhance, UK standards as we negotiate new relationships.”

At an OFC session not one person in the 400-strong audience raised their hand when asked if they trusted the government to deliver on its promises.