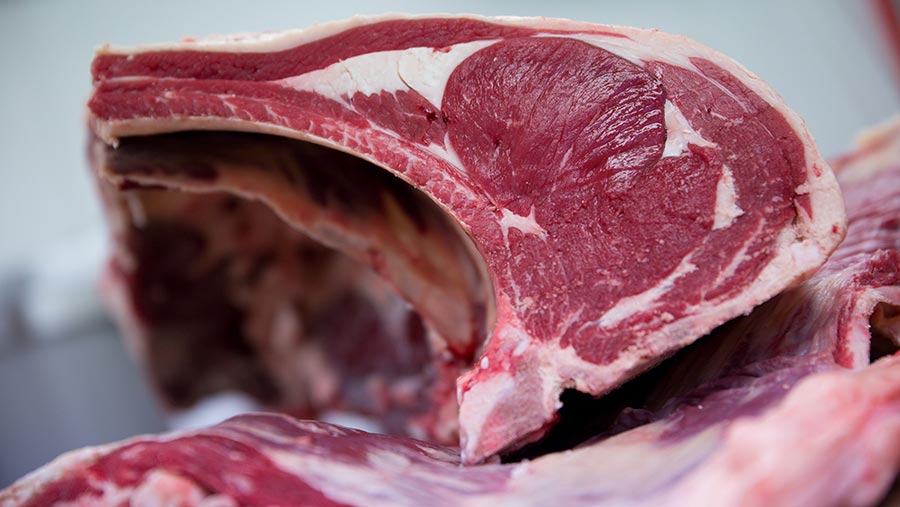 The second instalment of Henry Dimbleby’s National Food Strategy (NFS) calls for a 30% reduction in meat consumption over the next decade to meet government targets on health, climate and the environment.

The controversial recommendation to government will infuriate British livestock farmers and it is included in Mr Dimbleby’s 288-page NFS report, which was published on Thursday (15 July).

Writing in the executive summary, restaurateur Mr Dimbleby states: “Careful livestock farming can be a boon to the environment, but our current appetite for meat is unsustainable: 85% of farmland is used to feed livestock. We need some of that land back.”

But he concedes that such a move would be “significant” and it “won’t be easy to achieve”.

Mr Dimbleby argues that half the meat eaten in the UK is processed mince and this should be replaced by a “protein transition” over the next decade, in which the public should be actively encouraged to eat fermented plant protein and other meat-free alternatives.

However, the report concludes that a “meat tax” would be “politically impossible” as it would penalise poorer households, who may rely on cheap cuts or mince to feed their families and it could cause riots.

Cutting back meat and dairy intake by one-third would allow farmers to return 20% of the most unproductive land to natural habitats, such as species-rich wood pasture grazed by rare-breed cows, biodiverse forests and rewetted peat bogs.

“Reducing food production on some of this land poses very little risk to our food security. Losing the least productive 20% of farmland would reduce the calories we produce by only 3%,” the report argues.

To this end, the report recommends the introduction of the world’s first Sugar and Salt Reformulation Tax, which could raise up to £3.4bn/year for the Treasury.

Some of the money could be used to expand free school meals and support the diets of people living in the most deprived areas.

Responding to the report, the NFU said it should act as a “wake-up call” for everyone to value the food we eat.

NFU president Minette Batters said there must be “renewed emphasis on eating natural, whole foods” and she agreed that everyone should be supported to eat more fruit and vegetables, “something our farmers can support by growing more”.

But she insisted that British meat should be recognised in its own category for its “sustainability and dense nutritional value” and there must be a “clear distinction between grass-fed British meat and cheap imports”.

The NFS report urges Defra to maintain the budget for agricultural funding in England, currently £2.4bn (in real terms), until 2029.

Between £500m and £700m of this money should be ring-fenced for schemes to encourage carbon removal and habitat restoration, it suggests.

Mr Dimbleby argues that land in England should be divided into three areas: food production, nature and carbon sequestration and low-intensity, nature-friendly farming.

The report says Defra must give farmers more clarity about the implementation of its new Environmental Land Management (ELM) scheme, which will replace the subsidies offered under the EU’s Common Agricultural Policy and pay “public money for public goods” such as tree planting, flood prevention, improving soils, animal welfare and carbon sequestration.

But the report warns that 40% of farms currently rely on Basic Payments to make a profit, and farmers will need time and money to adjust their businesses.

Mr Dimbleby’s report urges the government to invest £1bn of the upcoming £22bn Innovation Strategy in research and development to help improve the national diet, develop sustainable farming practices and protect the environment.

The money should be invested in a range of initiatives, including methane-reducing additives for sheep and cattle, new agroecological techniques, and local initiatives to improve health outcomes in deprived communities.

Food education must be central to the national curriculum and the UK’s food and farming standards must be protected in any new trade deals, it adds.

“There is no point making UK farmers do all the hard work necessary to reduce carbon emissions and restore biodiversity, only to open up the market to cheap food produced to lower standards abroad,” says the report.

“Any change in land use, particularly to the extent that the strategy recommends, must be driven by the market and positive incentives rather than compulsion – and not come at the expense of the country’s ability to feed itself.”
Mark Bridgeman, president, Country Land and Business Association

“We need a clear pathway for a transition to organic/agroecological farming laid out for farmers, one that is supported by governments and the market. As a first step, policy needs to ensure ongoing support for organic farming systems and embrace more environmentally benign approaches.”
Roger Kerr, chief executive, Organic Farmers & Growers

“What we already know from the Agriculture Act, which focuses on turning farmers into environmentalists, means that much of this report is no surprise. In truth, British farming is being shrunk to allow for more food imports as part of this government’s new trade strategy.”
Liz Webster, founder, farm lobby group Save British Farming

“While we are disappointed by the lack of emphasis on the importance of local food and provenance in the strategy, we are pleased with the recognition of the role of our native breeds.”
Christopher Price, chief executive, Rare Breeds Survival Trust

“A 30% meat reduction will not be enough to create a truly sustainable food system. Current subsidies and taxes must change so that the right kinds of food, especially plant-based ones and alternative proteins, can be embraced by retailers and consumers.”
Dr Nick Palmer, head, Compassion in World Farming UK