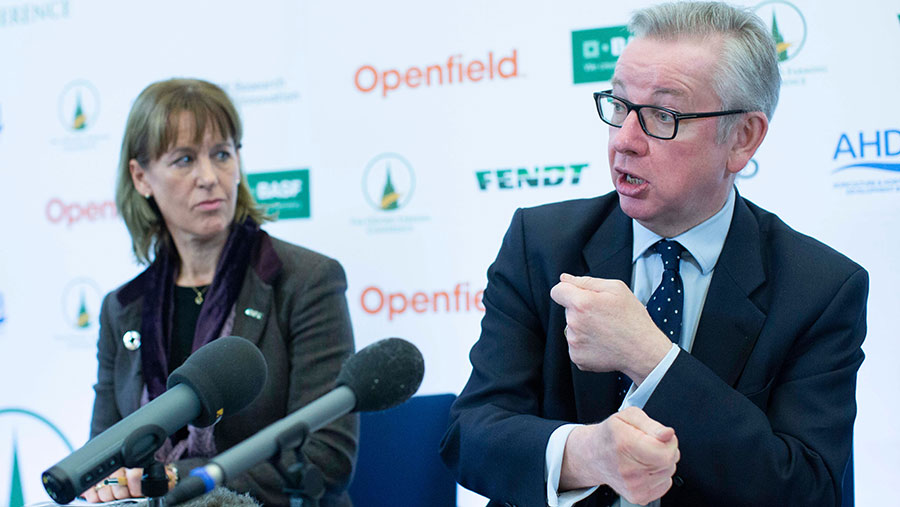 Fears that British farmers will face a flood of substandard food imports were a key topic at the Oxford Farming Conference – as politicians and industry leaders clashed over the trade prospects for growers and livestock producers after the UK leaves the European Union.

Defra secretary Michael Gove and farm minister George Eustice both insisted farmers have nothing to fear so long as they embrace life outside the EU.

But industry leaders are less certain – prompting the NFU to call for written guarantees that import standards won’t be watered down.

Key among concerns is that UK production standards can be maintained but relaxed for imports – leaving British farmers undermined by shipments of substandard food coming into the country from overseas.

Mr Eustice acknowledged that many farmers are apprehensive because of the uncertain situation.

But he said clarity and certainty would prevail “one way or the other” in the weeks ahead as parliament voted on the Brexit process.

The UK is the world’s third-largest import market and the target destination for a lot of other countries.

But the government has regulated to ensure the UK had the highest food safety and animal welfare standards in the world, said Mr Eustice.

“It is important that we safeguard what we have created collectively here in the UK, which is one of the most sophisticated and vibrant food markets in the world,” he told delegates.

Mr Eustice also sought to address farmers’ concerns that UK food standards could be relaxed in return for potentially lucrative trade agreements with other countries – paving the way for imports of products such as hormone-treated beef or chlorine-washed chicken.

It would be unlawful for the government to do a deal that allowed hormone-treated beef into the UK, said Mr Eustice – prompting an accusation from Labour shadow international trade secretary Barry Gardiner that the government is “spinning the truth” on food standards.

Mr Gardiner, himself a former Defra minister, said the government could use so-called Henry VIII powers to change the law without having to seek permission from parliament – a suggestion subsequently denied by Mr Eustice.

But Mr Gardiner warned: “Where you do deals – where you to do trade agreements – you see alignment of standards. It is that simple.”

Farmers should be especially wary, Mr Gardiner added. Mr Gove was insisting there would be no relaxation of standards, but international trade secretary Liam Fox was working towards accepting lower quality food imports from the USA, he warned.

The government may well not lower standards for food produced in the UK, he added. But Mr Fox’s pursuit of a trade deal with the USA could see British consumers allowed to purchase substandard imports of US food that was cheaper.

The greatest prize of leaving the EU was the opportunity to create a smart global trade strategy that genuinely offered a world of opportunity, he said.

“The critical thing for you is don’t let your Brexit agreement destroy that opportunity. That is absolutely critical for you if you are to win anything out of leaving the EU.”

The first step was to open up the UK market, said Sir Lockwood. Denying such a move, which would stimulate innovation, boosting productivity and investment in science and technology, would lead to a race to the bottom for British farmers, he said.

That said, it was important that any Brexit deal between the UK and the EU was the right one – otherwise it could scupper a trade agreement with other countries, particularly the USA.

This meant the UK must leave the EU customs union.

“Free trade agreements must be high quality though. If you do quick nasty ones you will regret them for 15 or 20 years or more.”

Farmers had nothing to fear from opening up the UK market, Sir Lockwood insisted. “I can’t believe the EU and you don’t want similar high standards. Mutual recognition of regulation is critically important for a free trade agreement.”

NFU president Minette Batters said the time for warm words had passed. Government guarantees to maintain food standards should be made in writing, she said – enshrined in legislation within the government’s Agriculture Bill.

“It is just not good enough to say that parliament will not allow trade deals where agriculture doesn’t feature. That simply doesn’t stack up. If you haven’t put it in writing, it is beyond the power of parliament by that time.”