Liz Truss, Secretary of State for International Trade, explains why she believes US trade talks will benefit UK farmers, despite concerns from the farming industry about being undercut by imported food.

See Farmers Weekly’s commentary in the box below. 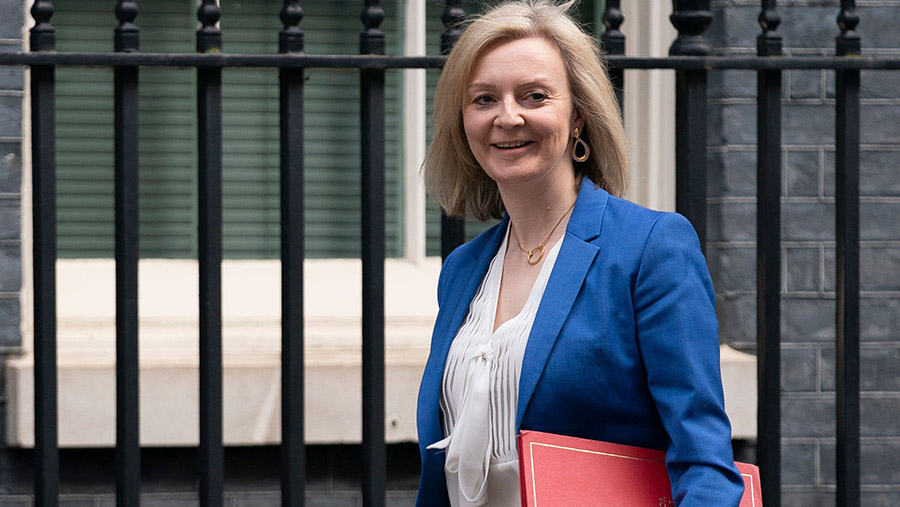 The UK is a high-quality and competitive producer of agricultural and agri-food products. But we understand that farmers too are facing difficult challenges as a result of the coronavirus.

That is why as we negotiate the UK’s new trade agreements, including with the US, we will always make sure we are not only standing up for British farming, but actually using these talks to secure new opportunities for farmers.

Our analysis shows that agricultural sectors are set to gain from a US deal.

While an agreement will benefit all parts of the UK, we would expect Scotland and the Midlands to see the most positive impact on local businesses and exporters.

An agreement with the US could remove tariffs of up to 26% on British beef – a market only recently opened and worth £66m to UK farmers.

That said, we understand that beef farmers may feel anxious at the prospect of a US trade deal, given the size and strength of the US market.

We will therefore be extremely cautious to ensure any “opening up” does not cause an unwanted downturn for domestic producers.

A deal with the US could bring similar benefits for the lamb industry.

It is not widely known that the US is the second-largest importer of lamb in the world, and even a 3% market share could boost annual UK lamb exports by £18m.

The UK now exports more dairy products than it imports – for the first time in recent history – and trade deals could create even more opportunities.

Today, the US continues to apply a 17% tariff on cheddar cheese exports, which could be removed if we succeed in reaching an ambitious trade agreement.

If a free-trade agreement (FTA) were to enable just a 10% increase in exports to the US, this would result in a £5m increase for our cheese processors, estimated to be worth more than £90,000 for the average cheese producer.

In addition to having the opportunity to sell more produce in the US, an FTA could also allow UK farmers to source better and cheaper inputs for production.

For example, if the average farm saw a 0.5% reduction in costs a year, this could lead to them receiving £11,000 additional annual profit in 10 years’ time.

We will always ensure that UK FTAs are fair and reciprocal. British farmers will not face unbalanced competition.

We will continue to consult and engage with representative organisations, including the NFU and AHDB, in our trade negotiations.

We will never undermine our high domestic environmental protection, animal welfare and food safety standards – ensuring that in any agreement British farmers are always able to compete.

I am committed to negotiating the best possible deal for UK farmers and involving the industry in trade negotiations.

As our first round of talks concludes this Friday (15 May), we will move one step closer to lifting trade barriers with the US.

This is a huge opportunity for all farmers, wherever they are in the UK.

The farming industry has been crying out for months for a firm commitment from government that any food imports under a future free-trade deal (FTA) with the likes of the US must not have been produced using methods that would be illegal in this country.

Chlorine-washed chicken and hormone-injected beef are the two most quoted examples, though US farmers have a far greater arsenal of pesticides and use many more antibiotics to gain further competitive advantage.

So, to hear the international trade secretary specify that “no UK import standards will be diminished as part of an FTA” and that she will “ensure that in any agreement British farmers are always able to compete” is encouraging. But it does not go far enough.

For a start, a politician’s words are one thing, enshrining it in legislation is quite another.

The government had a golden opportunity to do just that this week with the third reading of the Agriculture Bill – and failed to take it.

Despite four amendments to the Bill to secure such protection, including two from Conservative MPs, the votes were lost by a big majority as the Tory whips saw off any attempt at a backbench rebellion.

The other problem is the words in Liz Truss’ statement “as part of an FTA”.

It is quite possible that, as part of a deal, the US may accept some limit on its food exports, perhaps agreeing to a small quota for limited amount of hormone-free beef to enter the UK at a reduced or zero tariff.

But, without a legal ban on all imports of beef reared with hormones (or pigmeat from animals administered excess antibiotics as another example), the US would still be able to ship its products to the UK outside of the FTA under WTO rules – as would any other country.

Yes, it would have to pay the tariff to do so, but given the government’s intention to apply far lower tariffs as we break free from the EU, the chances are that those imports will still undercut our producers given the massive cost advantage US and other third-country producers have.

In a separate article this week for the Conservative Home newsletter, Liz Truss’ predecessor, Liam Fox, also set out his case on trade.

In it, he says that insisting on equivalence of standards for imported food could kill off the prospects of a free-trade deal with the US and cause “huge damage to the UK’s international reputation for observing treaty laws”.

Insisting on a so-called “level playing field” would simply be “virtue signalling” to Brussels bureaucrats, he says, rather than standing up as a liberal, free-trading sovereign nation.

Such jingoistic thinking may find support in some quarters, but such an approach would also impose additional costs on our own food sector, while turning a blind eye to poorer animal welfare and environmental degradation abroad.

Instead, the UK should be taking a stance. We should be trying to effect change at the World Trade Organization to ensure animal welfare and environmental standards do count when it comes to trade.

That argument has been tried before and some precedents set, though it will be easier to achieve if the principle of protecting our farmers from lower-standard imports is enshrined in primary legislation.

The Agriculture Bill, now on its way to the House of Lords, provides the means to do just that.