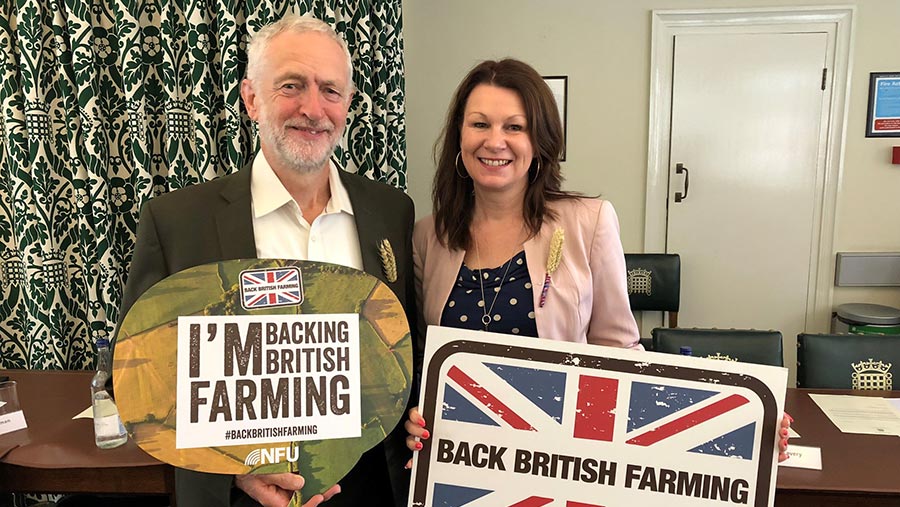 Politicians have been showing their support for British farming by wearing wheat pin badges on the NFU’s Back British Farming Day (12 September).

The badges are made of British wheat and wool and symbolise the importance of food and farming in Britain.

For the first time, the Palace of Westminster is serving 9,000 “Back British Farming” meals in all its canteens to celebrate the great food produced by British farmers.

See also: How to prepare and manage your farm business for Brexit

Welsh Conservatives’ shadow rural affairs secretary Andrew Davies said: “The importance of enhancing and improving our levels of food security across Britain cannot be underestimated and we need to do more.

“Back British Farming Day is a great opportunity to promote what is the backbone of life in Wales and across these isles – and that’s farming.

“Farmers are the original friends of the earth and custodians of our environment. You simply cannot divorce agriculture, food production and the environment and that’s why it’s vital governments of all colours support this crucial industry.

“We produce some of the highest-quality food in the world – but it’s imperative we do more to secure the long-term future of domestic agriculture and food production.”

On the same day, the NFU launched a food report – UK: A Nation United by Food – which will be sent to hundreds of MPs across the country to open up discussions about the future of food in Britain.

The document raises important questions about what Britain needs for a thriving domestic food industry.

It focuses on four areas, including how to feed a growing population, the UK diet and the rise of obesity and pressures on the NHS, maintaining food standards amid the threat of cheap imports and working with nature.

NFU president Minette Batters urged MPs to use the report to broaden the conversation about the future of British food to include consumers, producers, processors, retailers and policy-makers.

“The privilege of a safe and secure food supply must not be taken for granted,” she said.

“By starting a nationwide conversation we can work together to help plot the course for the future of food in Britain.

“If we do this, the benefits – economically, socially and environmentally – will be great.”

How you can support Back British Farming Day

It’s #BackBritishFarming day this Wednesday (12th Sept), Here is Jonathan, one of our livestock farmers who is #proudtoproduce beef for your Sunday roast lunch! Tag your MP and ask them to support Back British farming Day at @UKParliament. pic.twitter.com/QjY645uJ75

#BackBritishFarmingDay Providing feed, fuel, bedding, environmental goods and the landscape which is taken for granted. Let’s celebrate what farming is! pic.twitter.com/S21ErrvUVC