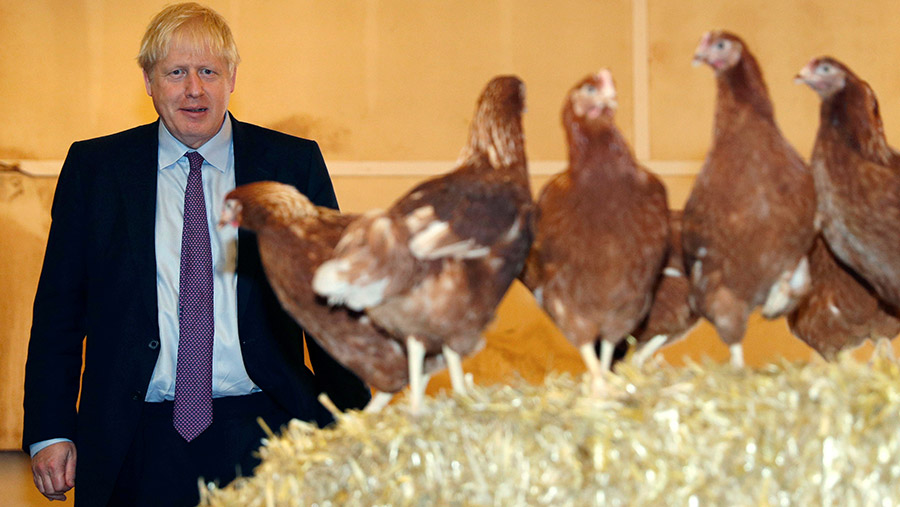 Prime minister Boris Johnson is coming under mounting pressure from his own party to protect British farmers in any post-Brexit free-trade deals that would undercut their businesses.

Farming and environmental organisations have welcomed an announcement from international trade secretary Liz Truss that a trade and agriculture commission will be set up to ensure the UK’s high food standards will not be compromised.

The UK government has faced strong calls from the NFU and others to uphold food and animal welfare standards in future trade deals.

More than a million people have signed a union petition urging the government to safeguard our production standards.

However, there is serious concern that the new body will not go far enough to protect the livelihoods of British farmers from substandard US food imports, such as chlorinated chicken and hormone-fed beef, “battery” eggs and pork from pigs produced by sows kept in stalls.

This is because Ms Truss has stated that the commission’s recommendations “should be advisory only”.

According to the Mail on Sunday, Mr Johnson held a private meeting to discuss the issue with Conservative MPs last week.

Rebel MPs who voted against the government’s decision not to enshrine minimum laws on food standards in the Agriculture Bill welcomed the commission – but said it must have teeth.

Specifically, the MPs have insisted that the new body must be given statutory powers that would require the government to formally respond to its recommendations.

George Freeman, Conservative MP for Mid Norfolk, tweeted: “Let’s say what we mean and mean what we say.

“The PM was crystal clear in the election that we would not negotiate away our food and farm welfare standards. So, let’s make it a red line in the US free-trade agreement.”

NFU president Minette Batters wrote to Ms Truss on 2 July welcoming her pledge to form a trade and agriculture commission.

But Mrs Batters said the body must be independent, accountable and have a broad, cross-UK membership.

She wrote: “You have proposed the commission is advisory and that its report will be presented to parliament.

“It will be critical that this is reinforced through a clear and formal link between the commission and parliament, with its advice and recommendations openly debated by parliament alongside a requirement for government to set out its response in a transparent and accountable way.”

The Agriculture Bill will start its committee stage on Tuesday (7 July) in the House of Lords, the first chance for line-by-line scrutiny.

Lords will discuss suggested changes on a range of subjects, including improving public access, animal welfare and financial support for healthy and environmentally sustainable food production.