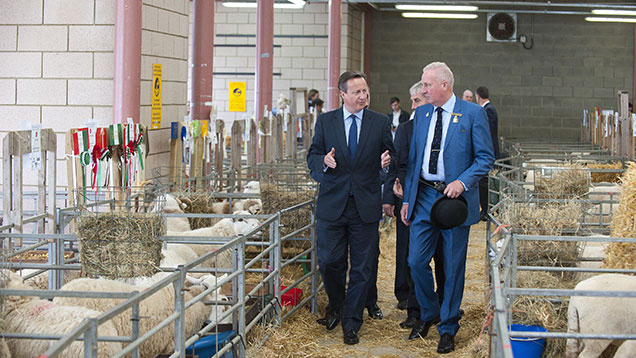 Prime minister David Cameron has promised a single Farm Inspection Taskforce, designed to cut the burden of red tape on farmers, will be operational by summer 2016.

The taskforce’s creation was a Conservative manifesto pledge as the party said it wanted to get rid of the “tangle” of regulators which are carrying out England’s farm inspections.

Mr Cameron made the promise about the timing of the new body as he toured the Royal Welsh Show on Thursday (23 July).

See also: 10 farming priorities for the next government

He explained that by summer 2016, farmers will only have to deal with one inspection body, rather than seven, which will combine farm visits with mandatory checks.

It will also use the latest technology to streamline the approach to inspections – for example using satellite data to analyse different crop types in fields.

It is anticipated this will reduce the number of farm inspections in England by 20,000 a year, down from the current rate of 125,000.

NFU president Meurig Raymond said he welcomed the prospect of simplification of the regulatory regime.

“At a time when commodity prices have plummeted, delivering reduced administration hurdles must also equate to reduced costs for farm businesses,” he said.

“Today’s announcement by the prime minister shows that the government is taking this issue seriously, but there is still much that can be done, as highlighted in the NFU’s manifesto.”