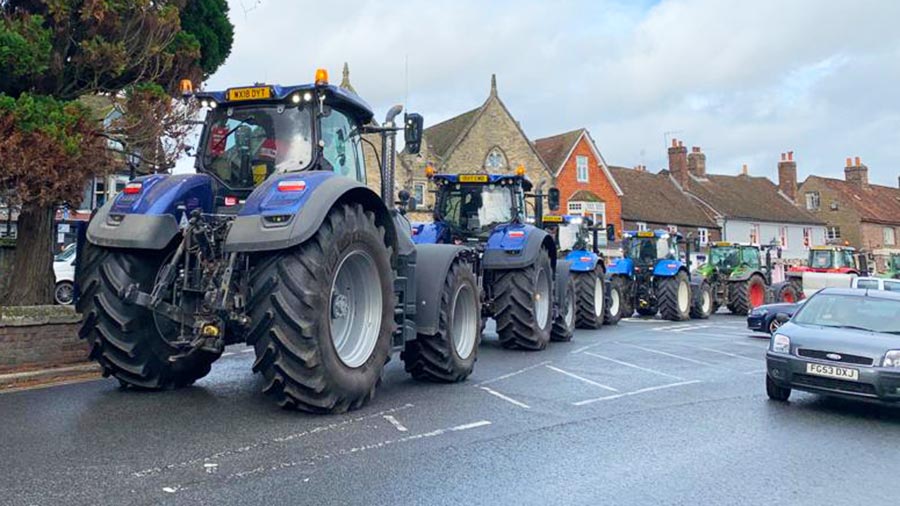 Angry farmers have driven their tractors through a Wiltshire market town to protest against threats to British food standards in future trade deals with the US and other countries.

Demonstrators from the campaign group, Save British Farming (SBF), farmers and their supporters staged the tractor demo in Marlborough on Friday afternoon (23 October).

They are concerned that Conservative government policies will undermine British farmers – unless legislation is introduced in the Agriculture Bill to protect them from a flood of inferior food imports post Brexit, such as US chlorinated chicken and hormone-fed beef.

“This government was happy to call itself the people’s parliament when first elected, but now they are deaf to what the people want,” said Liz Webster, a farmer’s wife and SBF founder.

“Wiltshire is a county built on agriculture and MPs should be voting to back rural communities, not sell us down the river to see low quality, foreign produce decimate British farming as happened to British coal and steel in the 1980s.”

In the article, Ms Leith urged MPs to back UK farmers and she warned of the dangers of trading away Britain’s high food standards.

However, SBF said Mr Kruger “didn’t listen to his mother” as he recently voted in parliament to reject Lords’ amendments to the Agriculture Bill which sought to strengthen British food standards.

Good to see Farmers protesting in #Marlborough today.@danny__kruger we hope you are listening to your constituents.
Your Mum, @PrueLeith knows we need to protect standards, your local farmers know it, the UK public know it…#SaveBritishFarming #AgricultureBill pic.twitter.com/9jcYEzyYct

The protesters made up a mock poster of the celebrity chef alongside her son with the slogan “Mama knows best”.

Wayne Smith, a local agricultural merchant, who lives in Calne near Marlborough, said: “I’m very concerned for the future of the agricultural industry and risks to our food security and our economy.

“I am deeply unhappy about Wiltshire MPs betraying our industry. I’ve voted Conservative all my life and this is making me think again.”

This demo was held ahead of the Agriculture Bill “ping-ponging” back from the House of Lords to the House of Commons on 4 November when MPs will be asked for a third time to stand up for British farmers by voting for amendments to support our high standards.

So far, MPs have resisted amendments on two occasions which would have protected British produce from low-quality imports undercutting them on the supermarket shelves. This is despite polls showing that between 80% and 94% of people are against lowering our food standards.