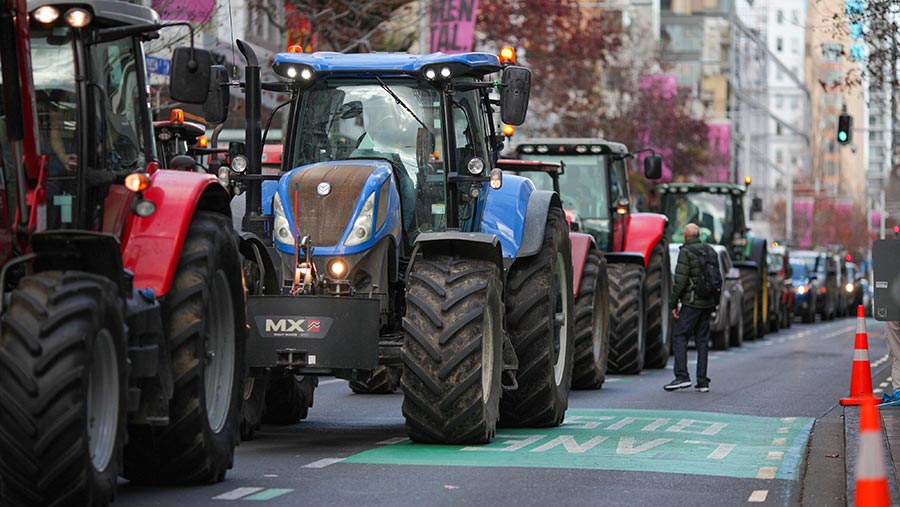 Thousands of farmers in New Zealand have blocked major roads in a nationwide protest against tougher environmental regulations.

Motorways, cities and towns were brought to a standstill by huge tractor convoys in 57 separate protests across the country on 16 July.

The policies were introduced after reports showed 60% of NZ’s rivers were polluted with run-off and wetland areas had shrunk by 10% due to over-abstraction. New Zealand has also faced international criticism for its lack of action over carbon reduction.

Protest leader Bryce McKenzie said while farmers accepted changes were necessary, the policies had not been thought through.

Mr McKenzie told national radio station RNZ that farmers were working hard to address environmental concerns, but the rules would hit businesses without achieving their goals.

In a statement, Groundswell NZ said it wanted to see regulations on freshwater and indigenous biodiversity scrapped. Instead it preferred controls to be handed to local catchment groups or councils.

“This policy punishes the landowners who have already been proactive in conservation, turns biodiversity into a liability, and wastes millions of dollars on tick-box significance assessments,” Groundswell NZ stated.

The group also called for the scrapping of the Clean Car Package, due to be introduced in January 2022, which it said would unfairly tax the off-road and utility vehicles relied upon by farmers.

However, NZ prime minister, Jacinda Ardern, tried to calm the situation and rejected allegations that her traditionally urban-backed Labour Party had sparked a rural-urban divide.

“There is no question in my mind that our primary sector is critical to New Zealand. They’ve helped us through Covid, that doesn’t mean, unfortunately, the challenges to our environment are going away,” Ms Ardern said.