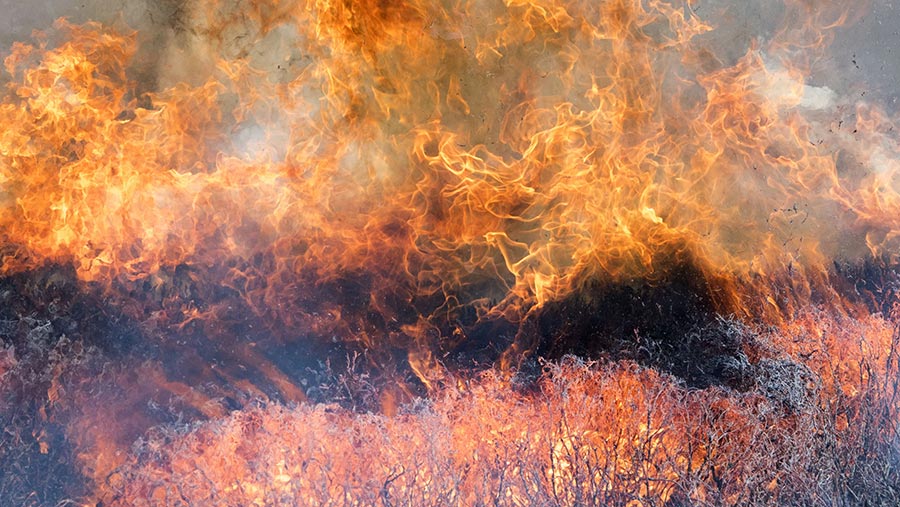 A Lancashire farmer has told of his heartbreak as he battled a wildfire spreading across Saddleworth Moor, Greater Manchester.

James Crowther, a gamekeeper and farmer from the Upper Wood Estate, was one of the first to respond with his brother Chris, Richard Birch, a fellow keeper, and another farmer.

The fire continues to rage more than a week after it broke out on Sunday (24 June). Mr Crowther said: “I have never seen anything like it. It was devastating.”

Tinder-dry conditions meant that early the next morning, the fire was increasing in force and spreading and the fire crews started to arrive.

Mr Crowther said: “We realised the fire was again taking hold and was getting out of control. By Monday evening it was starting to become a losing battle.

“We were dealing with 20ft flames and the extremely dry conditions, together with the rank heather– which was almost waist-height – meant flames were spreading rapidly.”

Another local farmer, James Needham, has posted a video on Facebook showing him and his colleagues racing across the moor on quad bikes to rescue sheep from the flames.

As the fire spread, more than 12 keepers from 10 estates worked tirelessly together on Arnfield Moor, which is managed by the RSPB and owned by United Utilities.

Mr Crowther said: “I just could not believe my eyes. Everything in front of us was just devastated and the flames kept bursting through.”

“It was heartbreaking. I could hear female grouse calling their chicks from within the thick smoke. We were seeing the burnt remains of golden plover, curlew, grouse and deer.

“There was so much destruction and we were all doing all we could, but the fire was ferocious.”

Mr Crowther said: “For those of us who work on the moor, this is our life. For people like my fellow keeper, Richard Birch, whose estate was in the line of fire, he has lost everything.

“It is going to take absolutely years to recover our precious heather moorland and the important wildlife that it is home to. Words cannot describe our feelings at the moment.”

Liam Bell, chairman of the National Gamekeepers’ Organisation, praised the keepers, saying they had put their own lives on the line to fight the fire.

He said: “No one can imagine what our courageous moorland gamekeepers, firemen and army personnel have been going through for the past few days and nights on Saddleworth Moor.

“As usual, gamekeepers were among the first to respond to the disaster and they, together with a number of equally brave farmers and graziers, became the front line.”

The fire risk on the moor had never been higher, said Mr Bell.

“Our thoughts are with our precious wildlife, our moorland communities and our farmers and gamekeepers who depend on these unique moorland habitats for their future survival.”

Hot and dry weather to continue

The Met Office says there is “plenty more” fine weather to come for the remainder of this week – although there will be some showers in the South West.

It follows a month of hot and dry weather, expected to be confirmed as one of the warmest and driest Junes on record.

Most areas, though, will remain dry, with blue skies and some low cloud and temperatures in the mid to high 20Cs across much of the country.

Looking further ahead towards the weekend of 7-8 July, high pressure is set to build from the Atlantic, with much of the UK staying dry and very warm with sunshine.

Winds will be light in most places, but it will be breezier around coasts.

The UK is expected to hold on to the dry, settled and very warm conditions in central and southern areas, although some showers or occasional thundery showers are possible at times.

Cloudier periods along with light rain and drizzle are likely in the North West, where temperatures are expected to be closer to normal towards the middle of July.