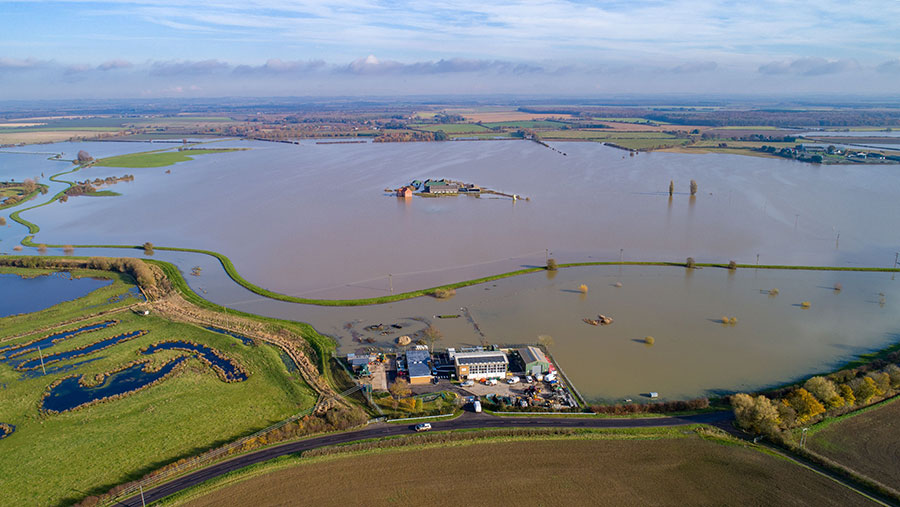 A row has broken out over the merits of dredging rivers in the wake of this week’s flooding in South Yorkshire and the East Midlands, with environmentalist George Monbiot suggesting “farmers could not be more wrong” in their demands for the Environment Agency to do more to unclog waterways.

In an extended Twitter thread, Mr Monbiot said to reduce the risk of urban floods, the authorities need to slow the flow of water, holding it back on farmland, and compensating farmers for doing so, “which is the exact opposite of dredging”.

See also: FW Opinion – What government must do to help flood-hit farmers

“Using dredging to stop floods is like using petrol to douse fires,” he tweeted.

To the farmers on the radio saying “we need more dredging to prevent floods”, you literally could not be more wrong.
Dredging of rivers passing through farmland speeds up the flow of water to the towns downstream. https://t.co/DxHoEQC8j4

Rivers should be “decanalised” (unstraightened) where they flow through farmland, he suggested, while introducing beavers further up the catchment could also help slow water flows and filter out sediment.

The comments have attracted the wrath of many farmers, who have responded accordingly.

Farmers Weekly columnist Will Evans, who farms near Wrexham, dismissed Mr Monbiot as an “awfully arrogant man” to assume he knew more than people who have dealt with rivers and flooding for generations.

What an awfully arrogant man you are to assume you know more than people who’ve dealt with rivers and flooding for generations.

Farmers are doing the best they can in an extremely difficult situation.

Mr Evans invited Mr Monbiot to come and have a look at his farm. “I’ll show you what the silted-up River Dee is doing to our fields – pushing outwards and washing away high-quality arable soil to the sea,” he tweeted.

George, if the rivers are not cleaned out, their capacity will reduce, and flooding will be more frequent. It’s simple common sense. #wringthesponge

But others agreed with Mr Monbiot that slowing the flow in upland areas by planting more trees or rewilding would do more to hold back water and reduce flooding.

This is terribly wrong. Terribly wrong and terribly damaging. Common sense would be reforesting and maintaining wild habitats that slow the rate of water into the rivers. This isn’t difficult stuff.

All this talk of dredging on @BBCr4today is rather dispiriting. At best it’s only a very expensive, environmentally destructive, quick fix. The focus needs to be on holding the water back further up the catchment.

He cited evidence from the Chartered Institution of Water and Environmental Management (CIWEM), which issued a report on dredging following the 2013 floods in Somerset, calling for a more multifaceted approach

What the report says

It its report, the CIWEM concluded that: “Dredging can play an important role in flood risk management in some cases, but is not a standalone solution.

“It should be considered in the context of a range of tools and the origins of different sources of floodwater, and comes with significant risks that must be understood at a local and catchment scale.”

With reference to the Somerset Levels in 2013, it suggested dredging would not have been able to prevent the flooding, but would have reduced the time the water was standing on farmland.

But dredging could also destabilise river banks and cause a loss of wildlife, it noted.

“Flood risk management strategies should look to a range of interventions, and include action to reduce runoff by working with natural practices to slow water, and increase infiltration and storage throughout the catchment,” it said.

What the academics say

According to hydrology expert Hannah Cloke, from the University of Reading, flooding such as that seen in Yorkshire and the East Midlands is the “new norm” due to climate change.

“We can’t solve this with flood defences alone and dredging can only ever be a small part of the answer,” she said.

“We have to think of the whole shopping bag of flood risk management strategies, including natural flood management, better planning and knowing what to do when a flood is forecast.”

Perforated dams
Roger Falconer, emeritus professor of water engineering at Cardiff University, suggested one solution would be to install flood control or “perforated” dams in the upper parts of a catchment.

“The principle is not that different from natural flood management, where one builds woody dams and plants trees in the upper reaches of catchments to hold back the water,” he said.

“However, for some of the recent floods we have experienced, woody dams and trees are insufficient alone.

Prof Falconer added that compensating farmers for flooding their land further downstream was not always viable to reduce flood risk, given the need for farmers to plant crops.

It is well understood that a warmer atmosphere can hold more moisture and latest science show extremely wet days during UK winters are currently up by about 15% compared with previous decades.

“Wetter future winters is a consistent projection in our best UK-focused climate models, with some predicting a 30-35% increase in rain by 2070,” Prof Mitchell said.