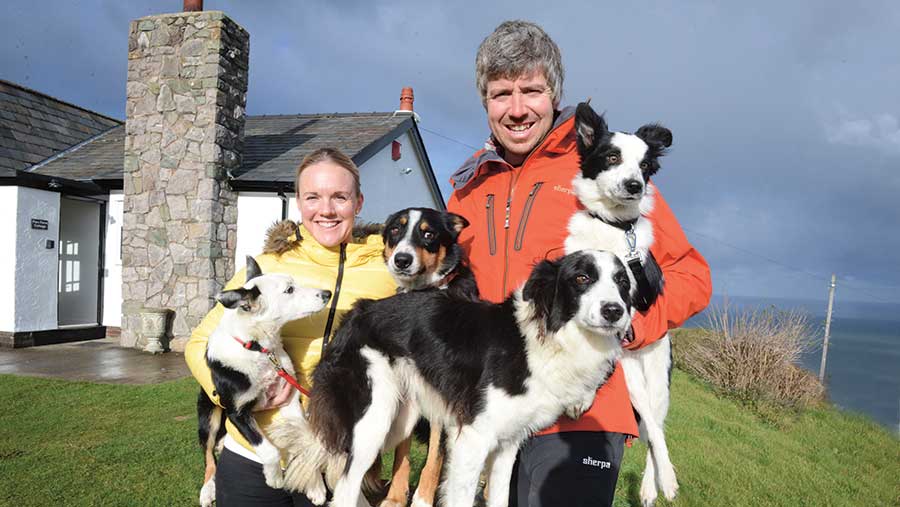 Earlier this year, the National Trust offered a farm in north Wales for a rent of just £1/year, so long as it was farmed with a “nature-first” approach. Debbie James visits the new tenant who has just taken up residence

Agricultural support post-Brexit will almost certainly be weighted more towards the environment, but this holds no fears for the man granted the UK’s most talked-about farm tenancy.

Dan Jones is just three weeks into his new role as National Trust tenant of Y Parc, an iconic farm perched on the Great Orme outcrop, on the north coast of Wales.

Already he is on a mission to fine tune the conservation grazing strategy that will protect and encourage populations of the silver studded blue butterfly and the foraging chough on the holding.

His every step will be subject to scrutiny because so many other farmers had competed for this 10-year tenancy. But Mr Jones is unfazed by the weight of that potential judgement.

“With the conservation grazing aspect of the tenancy there are lots of different organisations involved, so one of the challenges will be to keep everyone happy, but I’m flexible and adaptable,” he says.

It all started on the day Mr Jones was bombarded with Facebook notifications from friends, pointing to the National Trust’s search for a tenant to farm Y Parc.

The National Trust was offering the tenancy at a peppercorn rent of £1 and, given the farm’s spectacular location and the opportunities that came with it, there was an astonishing level of interest.

For Mr Jones and his wife Ceri – who have an eight-year-old son, Efan, and were running a successful farm and bed and breakfast business on Anglesey – there was a lot to consider.

But any doubts were lifted when they attended an open day at Y Parc.

“We could see it was a fantastic opportunity, both financially and for other reasons,” he recalls.

“We were interested in diversifying into tourism and this was the ideal location.”

The farm’s close proximity to the bustling seaside town of Llandudno also offered a good balance to living in the countryside.

Hundreds of other people applied but, despite the fierce competition, Mr Jones was hopeful of getting on to the shortlist of six. “I did seem to fit the criteria and have the experience.”

Confirmation of that came one Thursday evening with an interview scheduled for Monday morning, and a challenging one at that.

Mr Jones was taken to a mountain and set a series of shepherding challenges involving a flock of 100 sheep. Management of the sheep at Y Parc will be integral to the conservation grazing project.

“I was relieved I had taken one of my more experienced dogs because I had to settle the sheep at different points on the mountain and then herd them back into a pen,” he recalls.

He then accompanied an ecologist and conservationist on a walk around Y Parc and then gave a presentation of his vision for the farm, followed by a formal interview – all while being filmed by the BBC and the National Trust’s own film crew.

“Some people might have found the whole process quite intimidating, but I really enjoyed the experience,” Mr Jones admits.

Three days later he got the phone call he was hoping for, but with one proviso. He was sworn to secrecy until the National Trust officially announced his appointment six weeks later.

He only shared the news with his wife and son, though admits concealing it was tricky at times.

And now, the family’s new life is under way.

Plantlife, the National Trust’s conservation partner, has provided 370 Lleyns and 50 Herdwick ewes as its contribution to the conservation strategy, and Mr Jones is getting them used to being shepherded inside the farm walls, before they are turned on to the open area beyond.

In addition to the 144 acres inside the farm walls, there are grazing rights for 416 ewes on the open land that runs to the cliff edge.

The difficulty in shepherding large flocks on such a large, open headland, so popular with visitors and walkers, has meant that grazing over the past decade has been intensive and limited to the more fertile and protected fields within Parc Farm itself.

“Because grazing the wider headland has been a challenge, nature has suffered and we want to reverse that trend.”

The Plantlife sheep will be run as a hefted flock on this land, and Mr Jones aims to establish a commercial flock of Lleyn and Lleyn-cross ewes to produce prime lambs.

The family also has plans to diversify into tourism by offering shepherd’s hut-style accommodation and to market their own lamb one day. 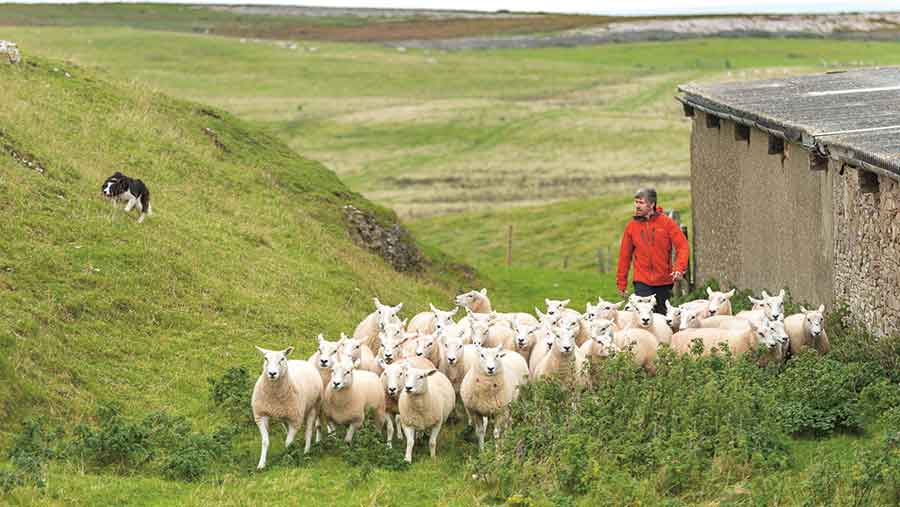 The Great Orme has been identified as an Important Plant Area by Plantlife. It is famed for its rare flowers, which are at risk from suffocating under a blanket of thick grass and overgrowth.

Careful grazing on the farm and coastal headland will help protect rare plants such as spiked speedwell, which is only found at a handful of sites in the UK.

The Lleyn and Herdwick sheep will graze their way through the thick grass to expose the limestone rock beneath, to allow small, delicate flowers such as basil thyme, hoary rockrose and spiked speedwell to thrive. 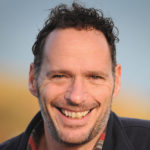 Dr Trevor Dines (right), botanical specialist at Plantlife, said: “As one of the top five sites for rare flowers in the UK, the Great Orme is a fantastic botanical treasure trove, with familiar flowers such as cowslip alongside real rarities you get nowhere else in Wales.

“But over the past 30 years I’ve seen dramatic changes, with fewer flowers and more grass. Years of undergrazing on the coastal edge mean many have disappeared under a thick blanket of rough grass.  It will be exciting to see our flock of sheep – and their 13,000 teeth – getting to work, opening up the turf and creating conditions for these plants to thrive again.”

With 800,000 visitors a year to the Great Orme, Mr Jones is prepared for public scrutiny.

In his previous role on Snowdon, walkers were keen to have a chat while he is working, but he quickly developed a strategy that allowed him to work too, by allowing them to shadow him.

His personal challenge at Y Parc is to prove that modern-day farming and conservation can exist in harmony, especially as the UK prepares to enter a new era of farm support.

“We have to be open-minded about the future. Perhaps we will see support leaning more towards conservation and we need to embrace that,” he insists.

But Mr Jones is a farmer and shepherd first and foremost, not a conservationist, and is prepared for a steep learning curve.

“These beautiful plants and animals here on the Great Orme, including the cotoneaster plant, are here in spite of farming.

“Sheep grazing is vital to the foraging chough. One field here is grazed heavily year-round to provide the right conditions for food and habitat. Farming and grazing definitely have a future in the uplands.”

Enthusiasm and experience in equal measure

Mr Jones’s enthusiasm for his new role is infectious, and he brings plenty of experience to the position too.

His upbringing on a farm on Anglesey laid the foundations for a lifelong love of sheep and sheepdogs.

After he graduated from the Welsh Agriculture College at Aberystwyth, he worked as a shepherd at the university farm.

In 2007 he became a tenant farmer and five years ago took on an additional tenancy. He stocked the farms with 1,000 Mule ewes and generated income from selling premium lambs and breeding lambs.

He had his first experience of conservation grazing when he was approached by the Bodorgan Estate on Anglesey to improve habitats by grazing rough land.

In 2015, his relationship with National Trust began, when he was appointed conservation shepherd on Mount Snowdon, managing grazing to improve habitats.

“I was walking up to 20 miles/day and the dogs were probably covering 80 miles.’’ They went out in all weather, right to the top of Snowdon and on the surrounding slopes.

This experience will be good grounding for his first winter on a farm where the wind is so ferocious at times that there is only one tree.

At 38, Mr Jones was at the upper age limit for securing the National Trust tenancy, but age has not depleted the energy and enthusiasm that he brings to his new job. “I consider myself to be flexible and easy going and that will be key.’’

Farmers Weekly will return to Great Orme in a year’s time to see how Mr Jones and his family have been getting on.