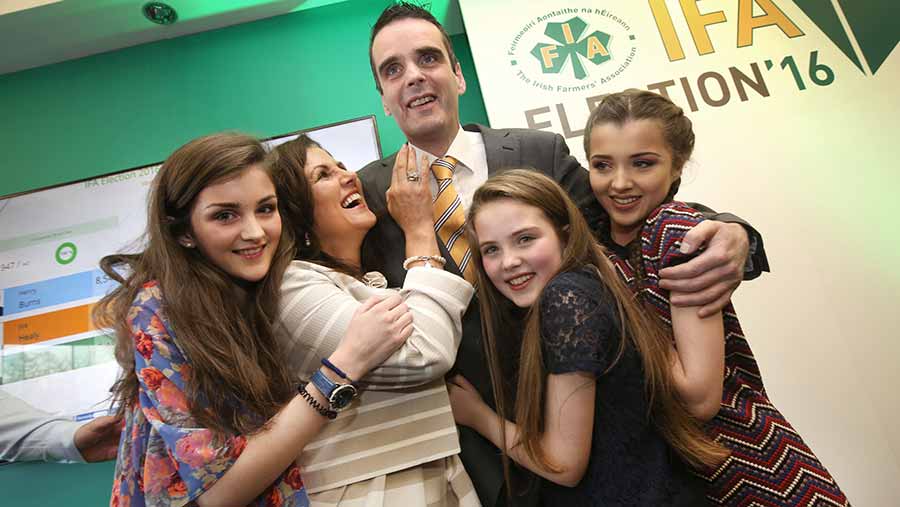 The Irish Farmers Association (IFA) has a new president. Joe Healy, a dairy and beef farmer from Athenry, County Galway, just scraped past the 50% mark in the first round of voting and was declared the new IFA president on Tuesday (19 April).

The election was triggered early, following the resignation of previous president Eddie Downey and IFA general secretary Pat Smith last November in a row over pay.

Throughout the election campaign, Mr Healy, 49, played on his strengths as a new voice, untainted by scandal.

Who is Joe Healy?

Mr Healy, who runs a 40ha dairy and beef farm in west Ireland, has been an active member of the IFA for more than 20 years, serving most recently on the farm business committee.

He was also livestock markets analyst with the Farming Independent newspaper from 2004-15 and is a former leader of the Macra na Feirme (the Irish Young Farmers Association).

He has a reputation for plain speaking and effective communication.

Mr Healy is married to Margaret, with three daughters, Nicole, Kiara and Anna.

As well as rebuilding the reputation of the IFA, Mr Healy has cited a recovery in farm incomes with a fair return to family farmers as his top priority.

He has also warned against agriculture becoming a “sacrificial lamb” in the process of international trade talks. Already, most farm commodities were being sold below the cost of production, he said.

In one of his first jobs as president, Mr Healy met representatives of dairy company Glanbia on Wednesday (20 April) to challenge the plc’s pricing structure and the cut to milk prices imposed in March.

On Thursday (21 April) he will travel to Brussels for a meeting of EU farm body Copa, where he said he would mount strong opposition to any Mercosur trade deal and build support for the IFA’s campaign to abolish import tariffs on fertilisers.

Mr Healy won the IFA election ahead of rivals Henry Burns and Flor McCarthy, who won 30% and 19% of the vote, respectively.