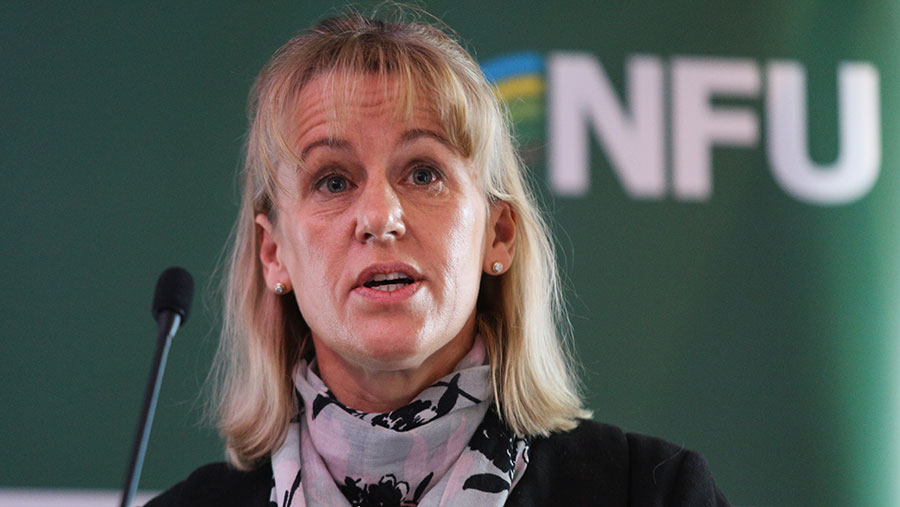 Speaking at an NFU council meeting on Tuesday (24 April), Ms Batters called on more farmers to have their say in the government’s consultation on its Command Paper Health and Harmony: the future for food, farming and the environment in a Green Brexit.

See also: How to be more self-reliant to meet Brexit challenges

Producers have until 8 May to respond to Defra proposals to replace direct payments with a system largely based on rewarding farmers who undertake environmental measures.

“There aren’t anywhere near as many farmers actively engaged with this as I would like,” Ms Batters told NFU council members at Stoneleigh Park, Warwickshire.

“It has been a really, really tough winter. Most people have got their heads down – they have got Brexit fatigue and they just feel it is beyond them.”

Government plans to overhaul farm policy after the UK leaves the EU in 2019 were life-changing, said Ms Batters.

I do believe we are staring down the barrel of a national park, Minette Batters, NFU president

But the consultation was a period of negotiation with the government and society to raise the profile of the industry and ensure a viable, thriving and profitable farming sector.

“Food supply, food security and food safety are not being taken seriously by government,” Ms Batters told the meeting.

“They do not register on the Richter scale.”

Alluding to repeated pledges by Defra secretary Michael Gove to secure a “green Brexit”, Ms Batters added: “I do believe we are staring down the barrel of a national park.”

But UK agriculture had come a long way over the past 20 years and more retailers were championing British food, sourcing 100% British and supporting British farmers.

“We want to grow our market where possible, we want to be more ambitious on exports. But these at every level are not a given.”

Mr Gove has described the Defra proposals as the start of a conversation, not a conclusion.

The government is expected to publish an Agriculture Bill formally laying out its post-Brexit plans for farming by the end of this year.