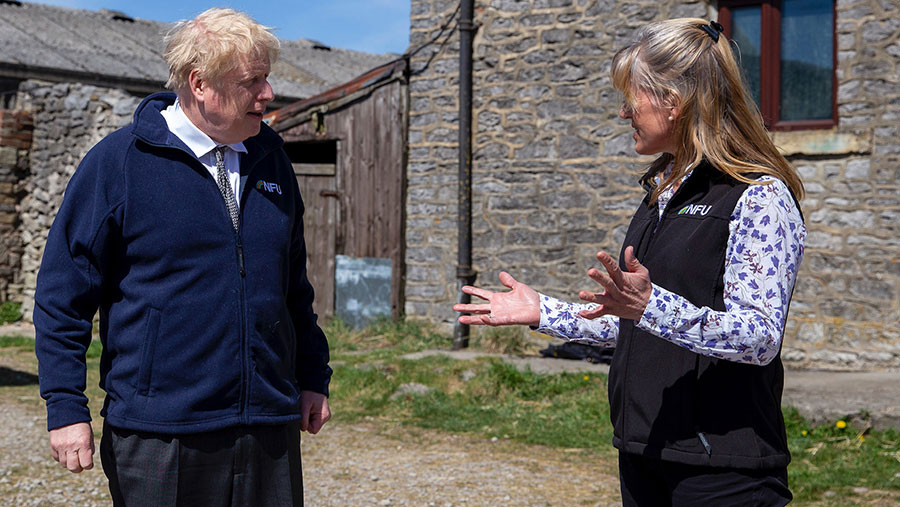 Boris Johnson has been urged to come clean about government plans for farming amid warnings that ongoing uncertainty is damaging confidence in the sector.

It follows mounting concern over the phase-out of the Basic Payment Scheme (BPS), which is due to begin in England later this year.

Industry leaders say more detail is needed about how farmers will be able to make up the lost income.

See also: Read the latest news on the ELM scheme in our Know How section

The government’s forthcoming Environmental Land Management scheme is due to be phased in from 2024.

But with direct payments making up 60% of some farm incomes, the NFU says it should not be seen as a full replacement for the old system.

The prime minister was taken to task on the issue during a visit on Friday 23 April to Derbyshire livestock producers Stuart and Leanne Fairfax, who farm at Stoney Middleton, in the Peak District National Park.

The couple and their three teenage children recently took on the tenancy of Longstone Moor Farm – predominantly a sheep farm, with some cattle, and about 80ha of land entered into an agri-environment scheme.

Despite having to take time out during an incredibly busy lambing season, Mr Fairfax said it was important to show Mr Johnson how farming and food production works hand-in-hand with looking after the iconic Peak District landscape. 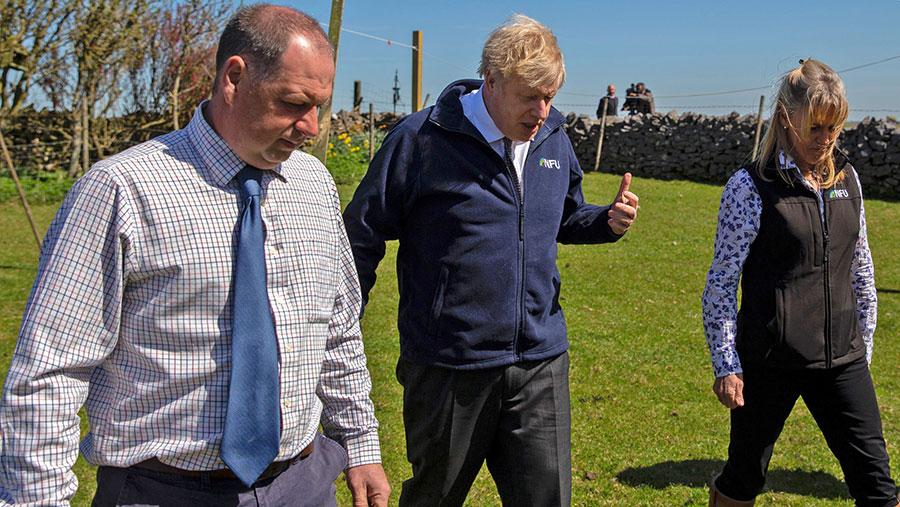 But he added: “It was also important to talk to him about the uncertainty many farmers are facing at the moment, particularly as we don’t know the full details of what will take over from the BPS payments that many farmers rely on.”

She said Mr Johnson had seen just how integral farmers are to maintaining and enhancing the environment – whether it was maintaining dry stone walls or looking after hedgerows.

Like Mr Fairfax, Mrs Batters said she too had raised concern over a lack of information about the government’s agricultural transition plan.

Farming was a long-term business and farmers would be making decisions now for many years down the line, she warned.

“Ongoing uncertainty about how they will replace income under the Basic Payment Scheme is damaging business confidence, which remains negative.

“I urged the prime minister to provide more clarity on his future agricultural policy as soon as possible,” Mrs Batters said.

Defra says it will offer financial assistance to help farmers prepare for the phase-out of direct payments, and invest in ways to improve their productivity and manage the environment sustainably.

The photos may look informal, but in reality they are nothing of the sort.

Visits like this are run on a tight schedule – planned down to the last minute.

Usually, nothing is left to chance in the quest to maximise media exposure to the benefit of everyone involved.

In this case, though, the pictures suggest the prime minister was less prepared than he might have been for a farm visit.

He wore city shoes in the calf shed and – whether by accident or design – put on an NFU fleece jacket to keep warm.

Then there was the suggestion that Mr Johnson had broken the coronavirus “rule of six” when he was photographed having tea and cake with five members of the Fairfax family and NFU president Minette Batters.

But Downing Street insisted that no social distancing rules had been broken as it was a business meeting rather than a social get-together.

There were also suggestions that Mr Johnson should have visited a farm struck down by bovine TB.

But his media minders were never likely to agree to that given the ongoing controversy over the government’s Derbyshire badger cull.

In this case, Number 10 got a good photo opportunity; the NFU was able to show it has Mr Johnson’s ear; and the Fairfax family can regale their friends for years to come about the day the prime minister came to tea – even if it was in the middle of lambing.