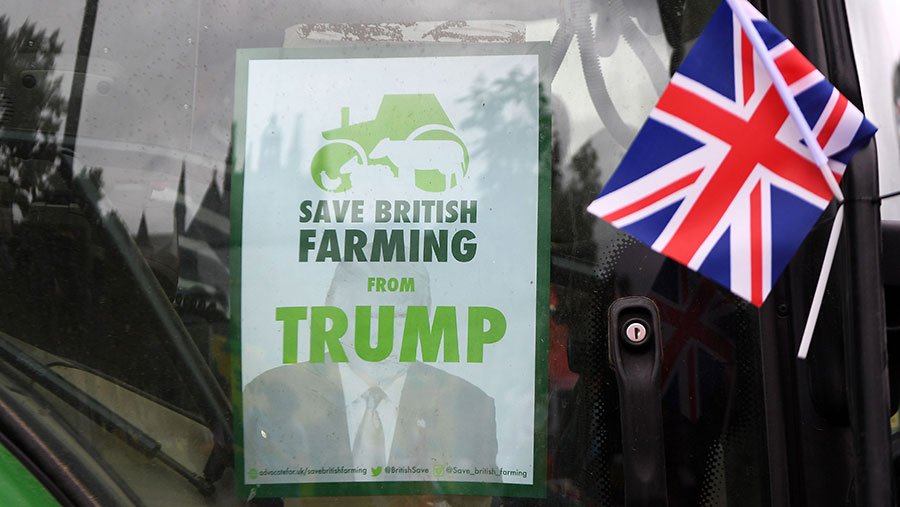 Farmers who fear their livelihoods will be undermined by cheap food imports are planning more protests as parliament debates the government’s Agriculture Bill.

The Save British Farming campaign group says a convoy of tractors will support a protest rally in the North Yorkshire market town of Northallerton on Friday (25 September).

See also: What the Agriculture Bill contains for farmers

The event – held in the parliamentary constituency of chancellor Rishi Sunak – is being timed to put pressure on MPs to not vote through the Bill unless it is amended.

Campaigners want legal guarantees that food imports will not be allowed into the country unless they meet or surpass British food standards.

They argue that British farmers would be undermined by cut-price imports produced using methods that are illegal in the UK.

This includes shipments of chlorinated chicken and hormone-treated beef – both production methods allowed in the US but banned in Britain.

A spokesman for the campaign group said: “This plan is hugely unpopular with the British public – who don’t want dodgy American meat – and it would sell our farmers down the river.”

The group has also organised protests in Wales – including a tractor rally in Cowbridge.

Meanwhile, farm leaders used a meeting with trade minister Ranil Jayawardena and Montgomeryshire MP Craig Williams to highlight the need for a good trade deal with the EU.

The round-table discussion at Pickstock Farm, Llanfechain, included representatives from the Farmers Union of Wales and NFU Cymru officials.

FUW president Glyn Roberts said: “We had a good meeting with the minister and a lively debate around the dangers of allowing cheap, substandard food imports after the Brexit withdrawal period.”

Food in some other non-EU countries was produced to lower animal health and welfare, environmental and social standards than those legally required in Wales and the rest of the UK, he said.

The Agriculture Bill continues its report stage in the House of Lords – a chance to closely scrutinise elements of the bill and make changes, on Tuesday 22 September. Members are expected to discuss the use of pesticides, protection of UK speciality food and drink products and standards for agricultural and food imports.

They will also debate the contribution of agriculture and land use to climate change targets.

The government has repeatedly said that British food standards will be maintained after the Brexit transition period ends on 31 December 2020.