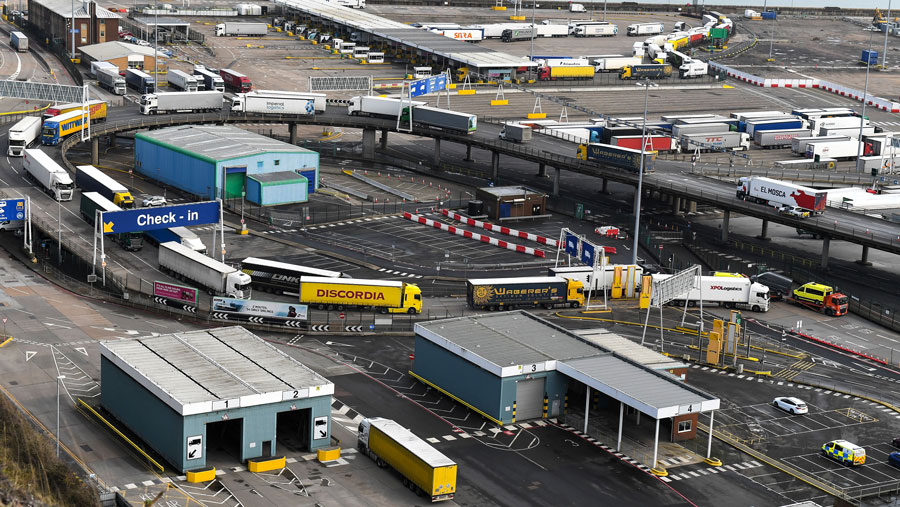 The introduction of tighter border controls on EU imports could slip again, a parliamentary watchdog has warned.

In a report on the government’s handling of post-Brexit trade issues, the National Audit Office (NAO) says the government needs to do “much more work” on cross-border trade.

Farmers and traders, concerned over the unchecked flow of cheaper EU produce into the UK, had pinned hopes on the tougher measures to control and level up trade.

But the introduction has been delayed three times, with a revised target of March 2022 for BCPs and between January and July 2022 for other measures.

Despite government assurances that the timetable will not slip again, the NAO says it has identified areas where delivery is still at risk and contingency plans may have to be deployed.

In other areas, the report criticises the continuing use of temporary measures that were introduced when the UK left the EU on 1 January 2021.

Delaying import controls, easing some rules and handing out financial support to help businesses continue to trade are not long-term solutions, the NAO says.

The government has also spent £113m on shoring up businesses affected by the new controls. In particular, the money went to the fishing industry, and small and medium-sized enterprises.

Much more work is needed to bring in effective, long-term import controls, the report says.

The moves had been enough to avoid significant queues at the border in January 2021.

But this was partially due to traffic flows being reduced because of stockpiling, trader wariness over the new rules and the Covid-19 pandemic, it adds.

The measures failed to prevent a 23% drop in GB-EU trade in the first quarter of this year, and a 13% shortfall over the following three months.

The pandemic was likely to have caused some of this effect. But trade with the EU had suffered far greater falls than trade with other countries, the report notes.

Food and livestock trade have been hit hardest. UK exports of food and live animals to the EU fell by 73% – the largest monthly decline of all commodity groups in January 2021.

Mr Royle explained that under existing arrangements there are no BCPs on either side of the English Channel.

Unlike the UK’s open-door policy, continental Europe has banned imports of live breeding animals until it had BCPs in place.

With their exports flowing freely into Britain there is little incentive to start construction and trade will remain at a standstill, he said.

Mr Royle suggested progress on constructing BCPs in the UK could spur the Europeans to do the same.

The NFU also wanted the government to invest in BCPs at a number of ports around Britain.

This would ensure biosecurity is better administered and importers of vital breeding stock could be introduced via the most cost-effective route, Mr Royle added.

Sheep trade between GB and Northern Ireland has been given a boost.

While talks over the wider NI protocol continue, changes to scrapie monitoring requirements that will allow the movement of breeding sheep have now been agreed.

Any breeder involved in trading breeding sheep between Great Britain and Northern Ireland can register for a new Scrapie Qualifying Scheme (SQS).

The option is available through SRUC’s Premium Sheep and Goat Health Scheme and allows a short window to sign up until 31 December 2021, the National Sheep Association said.

Once an application is approved, stock will be deemed to comply with these requirements and allowed to move, providing they meet the other requirements of the relevant export health certificate (EHC).

NSA chief executive Phil Stocker pointed out that once in the scheme, farmers will only be able to source incoming stock from other SQS or Scrapie Monitoring Scheme flocks.

“At this stage this only applies for farm-to-farm movements and there is more work to be done in relation to establishing any export assembly centres that might bring us back to any level of normality of competitive auctioning in this trade,” Mr Stocker said.

Enquiries regarding SQS should be sent to psghs@sruc.ac.uk or for EHCs please email exports@apha.gov.uk.