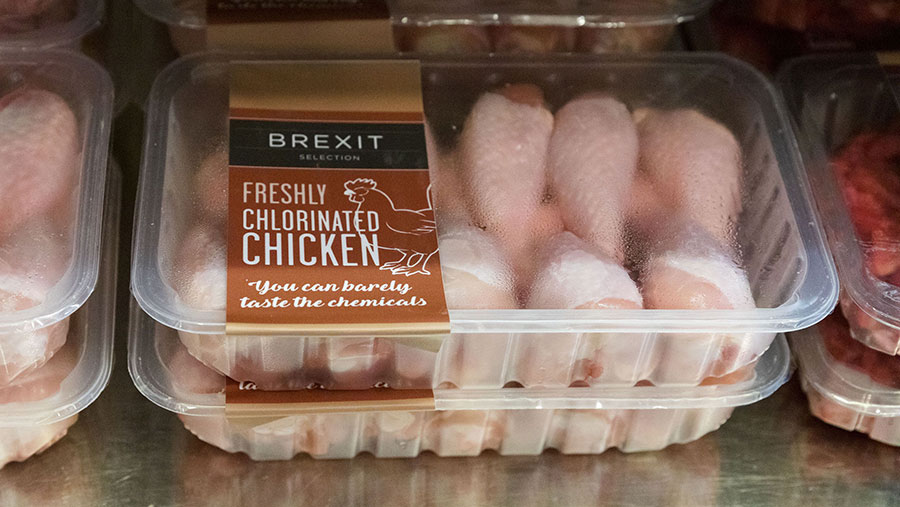 Supermarket chain Waitrose has broken ranks with the other UK retailers by promising it will never sell any products that do not meet the high standards of British farmers but are other retailers joining the fight?

The announcement by James Bailey, Waitrose’s newly appointed chief executive, effectively rules out the sale in its stores of lower-standard food imports, such as US chlorinated chicken and hormone-fed beef – regardless of what Brexit trade deals the UK strikes with other countries.

The message is in line with an NFU petition which calls for a ban on imports of food produced in ways that would be illegal here.

The online petition, which has gained the support of celebrity chef Jamie Oliver and former Defra secretary Theresa Villiers, has attracted more than one million signatures.

Despite a manifesto commitment to protect British farming and food standards in future trade deals, the Conservative government has failed to rule out the import of foods produced to lower standards.

In May, just 22 Conservative MPs backed an amendment to the Agriculture Bill which would have enshrined food protection standards in law.

Trade secretary Liz Truss told MPs last week that the UK’s food standards would not be compromised under any new trade deals. However, it is understood that the Conservatives are drawing up plans to cut tariffs on US food imports to secure a free trade agreement with Washington.

Mark Jones, a food and drink supply chain expert and a partner at law firm Gordons, said the government must protect health and animal welfare, and the UK farming community, which is struggling with volatile prices and extreme weather.

“We should be looking to elevate food standards and, critically, support and grow domestic agriculture in the UK,” Mr Jones said.

“If coronavirus has taught us anything it is that reliance on imports exposes us to greater risks in the event of crisis.

“Hormone-treated beef has been banned in the EU for 30 years. Some of the hormones used are carcinogenic. There is no reason to use chlorine on chicken unless it is in an attempt to kill bacteria.”

Here is how they have responded so far:

A spokesperson for Asda said: “We have no plans to change our current approach to welfare and safety standards in our fresh meat and poultry and will always be guided by our customers when it comes to the products we put on our shelves.”

The Co-op pointed out that it was the first retailer to switch all of its fresh meat to 100% British, in 2017. Today, all of its own-brand fresh and frozen meat is 100% British.

In the past five years, the Co-op has invested £2.5bn into British sourcing, which it says has enabled the company to establish “very strong relationships with our partners”.

A spokesperson said: “There’s no new pledge but we remain 100% British on fresh and frozen own-brand meat, as we have been since 2017.

“It’s also worth pointing out that that EU standards are enshrined in law – chlorinated chicken and hormone-pumped beef currently cannot be sold in the country – so any new deal would need to override these.”

The spokesperson added: “Any two-tier food system would signal something of a race to the bottom which would be of major concern.”

A spokesperson for Lidl said: “We are committed to maintaining existing high standards across all of our fresh produce.

“All of our fresh British meat and poultry is assured to either Red Tractor or RSPCA Assured standards and we will continue to back the British farming sector, working closely with our suppliers to offer our customers high-quality products at best-value prices.”

In a section entitled “Supporting British farming”, the report states: “We continue to sell 100% fresh British own-brand meat, milk and eggs in our stores throughout the year.

“We buy directly from 3,500 British farmers and growers and we’re the only retailer with our own livestock buyers. This gives us unique insight into the issues affecting farm production.”

In recent years, Morrisons has donated more than £15m to British farmers through its “For Farmers” range. The retailer has also launched a £2m farming apprenticeship fund to encourage a new generation of farmers into the industry.

A spokesperson for Sainsbury’s said: “We remain committed to offering our customers the best possible choice, quality and value while continuing to uphold our high standards and there are no plans to change this.”

Tesco said its position had not changed since its chief executive’s comments at the Financial Times Future of Retail conference in September last year.

Dave Lewis said consumers had no interest in lowering food standards to bring down food prices – and he ruled out Tesco selling chlorinated chicken from the US.

“When we test things with our customers, they are really quite vocal about what it is they do and don’t want,” Mr Lewis told delegates.

“So when people talk about ‘let’s go back to genetically modified foods’ or chlorinated chicken, if you have that conversation with UK customers, then they reject it. As a retailer, we have to respect what people want.”

A spokesperson for Spar UK said: “We take the quality of our products very seriously. We do not compromise on food quality or food safety standards.

“We work with British Retail Consortium accredited food producers, who operate to very high food standards, and we will always continue to do so. We complete our own audits to ensure all our suppliers meet our Spar product standards for quality and make all purchasing decisions based on these principles.

“We are proud to support British farmers and producers where possible. We know consumers are concerned about animal Welfare standards and we ensure that these standards are considered in our supply agreements. We also indicate country of origin for all meat and dairy products on our retail packaging so consumers are clear on where these ingredients are sourced.”

Do you have a view on this subject? Please email philip.case@markallengroup.com.