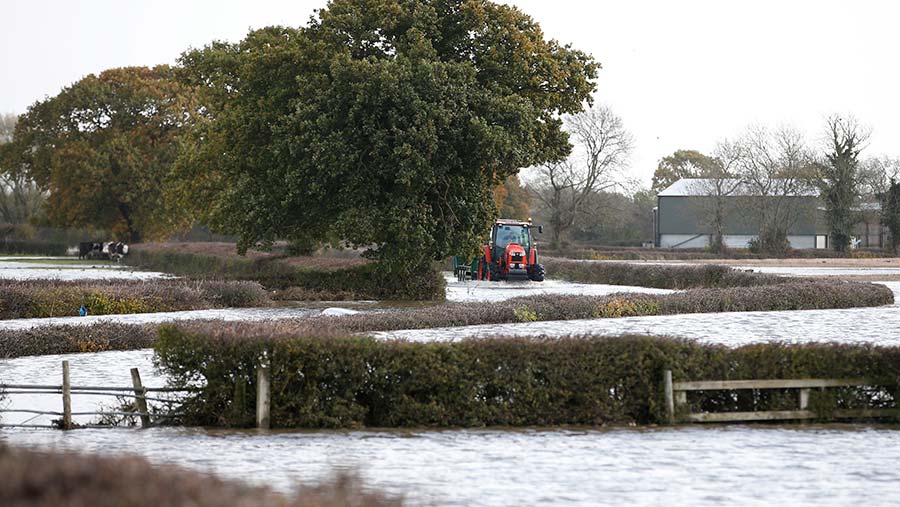 Farm charities have swung into action to help growers and livestock producers hit by autumn floods.

The Royal Agricultural Benevolent Institution (Rabi) is releasing thousands of pounds from its crisis fund to provide emergency grants to farming families.

It is the second time in a month that the charity has made emergency payments available via its confidential freephone helpline on 0808 281 9490.

The decision comes amid prolonged wet weather which has put a strain on many rural communities, particularly in the north of England and the Midlands.

Rabi chief executive Alicia Chivers said: “We are working closely with other farming organisations to make help available quickly to people who need it.

By simplifying its criteria and application process, the charity would fast-track assistance to farmers affected by the latest floods, she added.

“Having provided over £25,000 in emergency grants due to the flooding in Yorkshire, we know how devastating the impact of extreme weather can be for farmers.”

Since mid-October, Rabi has also given emergency grants from its crisis fund to 15 families affected by Tomlinson’s Dairies going into administration.

In the East Midlands, the Lincolnshire Rural Support Network (LRSN) said it was ready to help growers and livestock producers in need of support and advice.

Water levels near the village of Stainfield, east of Lincoln, rose a further 15cm overnight into Tuesday (12 November) – despite a pump employed by farmers.

Unprecedented rainfall this autumn had brought many challenges to Lincolnshire’s farmers and growers, the LRSN said.

With inches of rain falling in October and early November and more forecast, farmers face waterlogged and flooded fields after rivers burst their banks.

Flood alleviation schemes have been implemented, meaning many thousands of hectares of Lincolnshire farmland are under water.

The NFU has prepared a flood advice webpage urging affected farmers to report any incident to the Environment Agency incident hotline by calling 0800 80 70 60.

Members should also start to gather evidence separately, including videos and pictures of flooding impacts on their farms, it said.

Details of other organisations that may be able to provide support and help for farmers have been published by the You Are Not Alone charity.