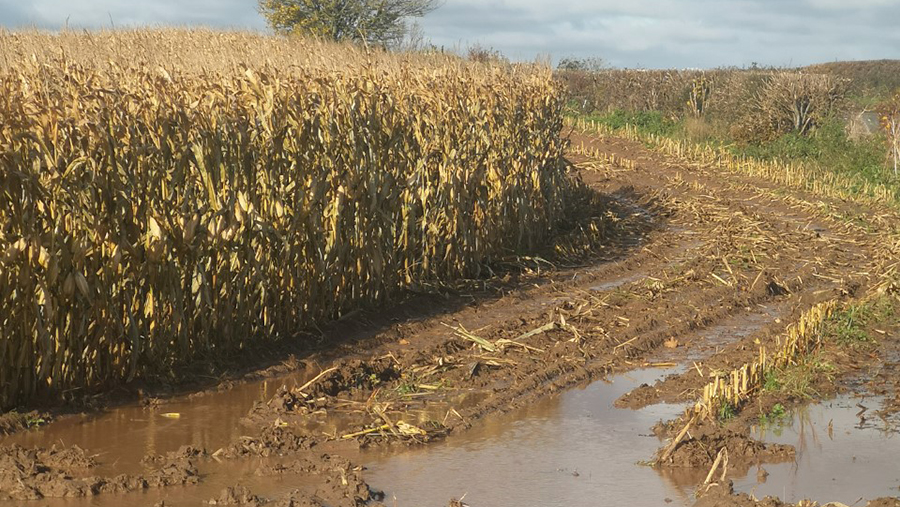 Farmers and contractors are battling to salvage what they can from maize crops as wet weather makes silaging all but impossible.

Flooding and sodden fields have brought the last of the maize harvest to a halt across much of England – with reports suggesting thousands of hectares are still in the ground.

Tim Russon, who runs a contracting service across Lincolnshire, Nottinghamshire and Yorkshire, says much of the maize in his area has long gone past the foraging stage.

There are very few alternative options left, he adds.

“One of these is to harvest and crimp the grain which will salvage the best of the crop, which I am doing for both anaerobic digestion and livestock feed,” says Mr Russon.

Crimping involves combine harvesting and then rolling the maize cob before applying a preservative to ensure a controlled fermentation once in an airtight clamp.

Modern preservatives allow maize to be crimped at 25-40% moisture content – although it must then remain sealed for at least three weeks before being fed.

At the moment, the ground is still too wet.

But with weather and ground conditions permitting, Mr Russon believes he will be able to combine maize right through until March.

“We have around 480ha of maize left to harvest and a number of our customers have agreed that combining the grain is the best way forward,” says Mr Russon.

“Much of the crop remaining in the ground has severely decreased in digestibility and feed value, and will be impossible to harvest as silage in the current wet conditions,” he says.

“However, by taking only the cob and leaving the [rest of the plant] in the field, the combine will have a bed of stalks and leaves on which to drive.

“This makes a massive difference to the cleanliness of the harvest, reducing the removal of soil from the field and cutting soil compaction.”

“As wholecrop maize matures, so its dry matter increases, while its digestibility, energy content and total harvestable yield go into decline,” he says.

“The plant as it dies also becomes more prone to fungal infection in the field, increasing the mycotoxin risk and greatly increasing the challenge of aerobic spoilage at feed-out.”

So far this season, the company has analysed more than 870 silage samples sent by farmers to its laboratory in Ashbourne, Derbyshire.

“Starch degradability is also similar to 2018 and bypass starch levels are good.”

While encouraging for farmers who harvested maize before the weather broke, Dr Homer says the wet autumn could have implications for feed quality in later crops.

Late harvested crops should have higher starch content, but will also have higher levels of both neutral detergent fibre and lignin – which will affect how the crops will feed.

Regular analysis throughout the winter will be essential, says Dr Homer.

“As maize starch fermentability increases with time in the clamp, it will be important to get clamps analysed regularly and to fine tune the diet to maintain optimum rumen health.”