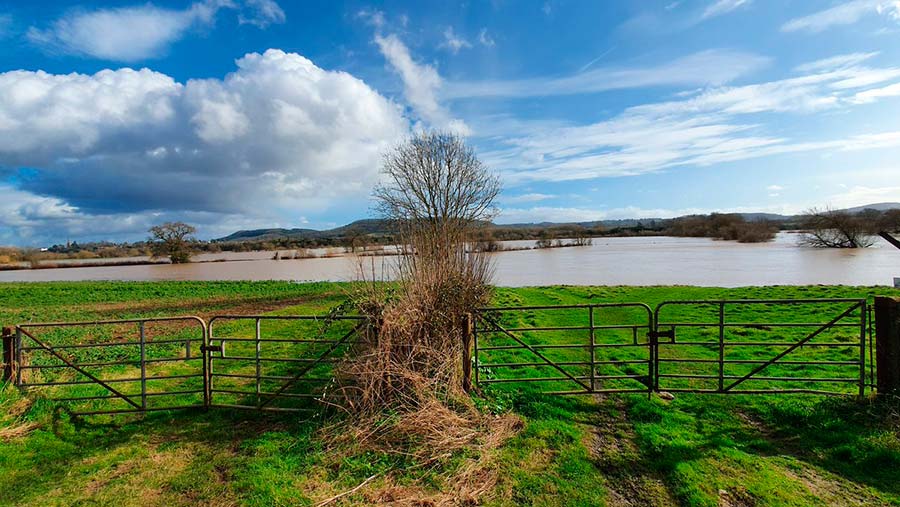 A Herefordshire farmer has revealed the damage caused by weeks of heavy rain and flooding – including ruined crops and debris strewn across his farm.

Ally Hunter Blair’s fields in Ross-on-Wye were submerged after storms Ciara and Dennis hit the UK in quick succession during February.

Record rainfall and the relentless nature of it meant farmers were unable to drill their crops in the autumn, and many of those who did have seen it washed away.

Sharing pictures on Twitter (@WyeFarm), Mr Hunter Blair said the water had receded, but he was now facing the aftermath of the extreme weather, which was “best described as a mess”.

He added: “The wheat is long dead, but a few oilseed rape plants are clinging on for life.”

The flood waters have receded & have left behind what's best described as a mess. The wheat is long dead, but a few oilseed rape plants are clinging on for life.
My swan chasing wasn't very effective but at least they aren't swimming on it. ??‍♂️ pic.twitter.com/xNOiqPNC0Q

In February, Mr Hunter Blair flew a drone over his family farm to show the damage the unprecedented rainfall had caused. More than 60ha of his land was submerged after the River Wye reached its highest recorded level and burst its banks.

Hedgehopping some of our flooded fields with the drone today. Record breaking flood here, we're just not sure what the record is because all of the gauges near us have maxed out! #StormDennis pic.twitter.com/tqAlpPxNYK

He told Farmers Weekly: “It has just been relentless. We have had 17 flood warnings since September and two rainfall records in six months.

“I’ve lost a third of my oilseed rape area and 12ha of wheat, eight which I had planted and the rest which I couldn’t because it has been so wet.

“We seem to be having more frequent, large floods which is worrying.”

Defra secretary George Eustice has faced calls from industry leaders to extend the 2019 Farming Recovery Fund to support farmers affected by the latest round of flooding. But so far, Defra has not made any further commitments.

It is understood that chancellor Rishi Sunak will announce an increase from £2.6bn to £5.2bn in spending on flood defences in the budget on Wednesday (11 March).

Somerset beef farmer James Winslade said the recent storms had dumped similar amounts of rainfall on his farm near Bridgewater as seen during the devastating flooding in 2012, 2013 and 2014.

But maintenance of rivers and watercourses in the interim meant the moors and floodplains had drained quickly, instead of being under water for three months.

He said: “After the flooding in 2014 the government did put money towards clearing silt from the pinch points. Some areas had silted up 52% so it was baffling that they weren’t being managed properly.

“Curry Moor, which holds 10.2 million cubic metres of water, drained off in near enough two weeks this time with the help from pumps, and this joined-up approach is what we need.

“The Environment Agency and utilities companies need to be proactive.”

The Environment Agency (EA) is calling on communities in the north and west of England, and those living along coasts and estuaries, to check their flood risk as more heavy rain and high tides could bring flooding over the coming days.

Heavy rain falling across already wet catchments may lead to significant flooding for some places along rivers in the north of England and the West Midlands, including the Ouse and Aire in Yorkshire.

Significant surface water flooding is also possible across parts of the West Midlands and the north of England into Tuesday (10 March) as further heavy rain falls on already saturated ground.

Farmers can keep up to date with the latest safety advice by calling Floodline on 0345 988 1188, following @EnvAgency on Twitter, or checking gov.uk for the latest flood updates.