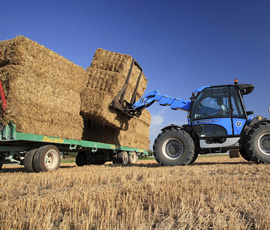 “It’s certainly been better than last year,” he said. “Although it is a bit strange drilling oilseed rape before we’ve finished cutting it.”

Wheat, which Mr Payne finished combining about two weeks ago, averaged around 8.9t/ha, slightly below the 10-year average of 9.4t/ha.

“Diego was the best – we had one field that almost reached 9.9t/ha.”

Relay and Horatio suffered a bit in the dry spring, and had a lot of bare patches, he added. “But yields were better than I’d anticipated in March.”

Winter oilseed rape averaged 4.2t/ha. “Where it was good, it was very good – but I had some fields next to the River Tone that had swans swimming on them on three occasions.”

But the beans – a mixture of winter and spring varieties both drilled at the end of February, were disappointing.

“They sat for six weeks in the cold, and although they later looked fantastic, they yielded 3.7t/ha at best – we usually like to get 5t/ha,” he added.

“The dry spring did for a lot of crops around here. We’re drilling oilseed rape at the moment, and it’s almost too dry, so we’ve stopped for a while. I can’t believe how remarkably relaxed it all is.”