Conventional agriculture rather than organic production represents the best chance of feeding the world while maintaining the environment, Jim Orson, technical director for The Arable Group, will tell growers at Cereals 2007.

In an exclusive preview given to Crops magazine prior to the event he said arguments that farmers shouldn’t use pesticides, nitrogen fertilisers or genetic modification to further crop production were risible on scientific grounds.

“With greenhouse gases in the spotlight, conventional agriculture with its dependence on fossil fuels gets a bad press. But DEFRA studies show, if anything, organic agriculture results in more emissions per tonne.” 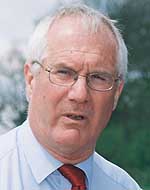 The reasons were threefold, he said. First, organic agriculture relied on high nitrate residues in the soil, which were the starting point for nitrous oxide production. Weight for weight nitrous oxide had 300 times the global warming potential of carbon dioxide, he said.

“Those in the organic movement who criticise farmers for using bag nitrogen have their own problems with the nutrient.”

That extends beyond greenhouse gas production, he said. “Some studies suggest nitrate leaching per tonne of wheat produced is four time less under conventional systems.”

Second, pesticides were amazingly climate-friendly, he suggested. “They represent only a small proportion of the total fossil energy used in crop production, but are responsible for a high proportion of crop output.”

Last, since organic yields were lower than conventional production, pollution per hectare had to spread over fewer tonnes, he said.

All these things suggested organic production was not the way forward, and it would be foolhardy to throw away “climate-friendly” pesticide technology. “But it is time to consider wider adoption of approaches developed in organic agriculture,” he admitted.

Conventional agriculture’s high reliance on bag nitrogen was a challenge, but there could be ways of reducing use through bi-cropping, or through genetic modification of wheat varieties that were less dependent on nitrogen, he concluded.