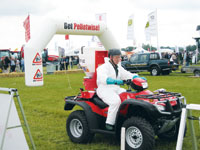 The Metaldehyde Stewardship Group‘s “Pellets and Pelleting” arena returns for Cereals 2010 to demonstrate some key new best practice guidelines for metaldehyde use to help safeguard the future of this key slug killer.

The guidelines significantly reduce the advised levels of metaldehyde that can be applied during the key autumn months. The amendments follow a recent water catchment study which showed diffuse losses through the soil and into drains during the autumn have a far higher impact on metaldehyde levels detected in watercourses than first thought.

While the annual maximum advised dose for the calendar year remains at 700g, a new maximum single application rate of 210g/ha of metaldehyde has been set, down from 250g. Crucially, the total recommended rate between 1 August and 31 December is cut to 210g/ha metaldehyde rate.

To help implement the latest advice, visitors can complete a 10-point Farm Action Plan for the 2010 slug pelleting season and secure two NRoSO points. There’s also the chance to win one of two NPTC training vouchers with each hourly “Get Pelletwise” demonstration.

“The Farm Action Plan is aimed to get visitors thinking about what they can do as individuals to help ensure metaldehyde stays out of surface waters,” explains the Metaldehyde Stewardship Group’s Steve Higginbotham.

“Our aim is to prevent metaldehyde exceedances occurring in water, particularly if the 2010 season presents unfavourable conditions and high slug pressure.

“The task ahead is very evidently a complex one,” says Mr Higginbotham. “But the success of last year’s Get Pelletwise campaign is something that shouldn’t be undervalued.

“It’s clear the messages associated with the risks of metaldehyde application are being understood. Indeed the 2009/10 water company results demonstrated that raw water analysis saw a significant reduction in the levels of metaldehyde being detected compared to 2008/09.

“However, we mustn’t forget the weather conditions experienced during last year’s slug pelleting period will have had a part to play, contributing significantly to a reduction in pellet use.”

Sustaining the reductions in detection will be the challenge, he adds. “We mustn’t become complacent. Urgent and sustained action is needed from the industry.

“This year we need to step it up a gear to get on top of the water exceedances and to secure the future of metaldehyde.” That means tackling all routes by which metaldehyde can enter into surface waters, including field run-off after heavy rainfall, poor application or point source spillages.

By completing a Farm Action Plan at Cereals, growers can highlight the various risk stages associated with slug pelleting, such as pellet applications, field assessments, calibration and machinery set up.

This will develop into 10 action points for improvement including operator training, active ingredient choice, adapting pelleting practices and more stringent handling practices to include in slug control strategies.

There will be working demonstrations running every hour on the pelleting arena throughout the two days, covering all aspects of slug control from crop and field assessments, product choice, calibration and practical application.

“Calibration can have a substantial effect on the level of slug control and crop protection as well as on yield and input costs. An even spread pattern is vital – particularly if we are to make the best practice guidelines work at their best,” says Mr Higginbotham.

Also at the arena

The pelleting arena will feature stands where water companies, the Environment Agency, machinery manufacturers and FWAG will be on hand to offer advice and assist with filling out the Farm Action Plan.

David Glen, a leading authority on slug control, will answer questions on the menacing molluscs with advice on when to step in with slug control.