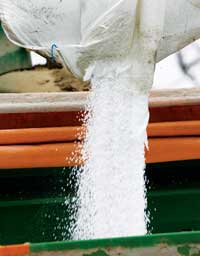 Innovative products that help to prevent nutrient losses and improve the efficiency of fertiliser applications were demonstrated at Cereals by SFP and Carrs Fertilisers.

“Nutrisphere-N keeps the nitrogen fertiliser in its ammonium state for longer, allowing it to get into the soil and be taken up by the crops. The result is less leaching and less volatilisation.”

Studies in the USA have shown a 10-15% increase in yields where the product was used, he said.

Of particular relevance to this year, given the price differential, was that the product could be used to make urea as effective as any other nitrogen source, said Mr Kerr. “We are conducting some UK trials this year, so will have results at harvest. As well as yield responses, we are looking at differences in timings.”

Avail, a phosphorous fertiliser enhancer, was also available from Carrs, after being launched last year. It worked by inhibiting the fixation of phosphorus fertiliser, making more of it available to the crop when it was needed, claimed Mr Kerr.

“It’s been well received and growers have had good responses from it,” he said. “It’s another innovation that helps to protect the environment while also allowing growers to make the most from their fertiliser investment.”