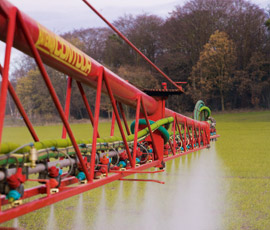 Industry-led stewardship initiatives can have a valuable role in securing the future of some key pesticides currently at risk, as highlighted by the latest scheme for chlorpyrifos.

A number of key actives are at risk because of various reasons such as changes in the EU approvals process, residues being found in water or rising public concerns.

However, one way to address the possible loss is through industry-led arable stewardship schemes such as the chlorpyrifos “Say No to Drift” campaign. This latest initiative has proved so successful that a sister campaign is being launched in Italy later this year.

Chlorpyrifos is the last remaining pesticide with an organophosphate mode of action that is available for use on a broad range of food crops. But as Steve Norman, principal research ecotoxicologist at Dow AgroSciences, points out, it’s important growers always use low-drift nozzles for chlorpyrifos, because it is not possible to pass the aquatic risk assessment without them.

ADAS entomologist Steve Ellis says the industry needs a mix of chemistry with different modes of action for the long-term success of pest control programmes and help combat the potential for insecticides resistance.

This season is a good example of how critical chlorpyrifos is to UK wheat growers. The many backward wheat crops resulting from the wet, cold weather were potentially at greater risk from wheat bulb fly.

“But the problem is that chlorpyrifos is the only egg hatch product left. There is nothing else to treat the problem. “Severe infestations can mean having to redrill the whole crop.

Later in the year, it can be important for control of orange blossom midge. “Chlorpyrifos has the advantage that it controls adults, eggs and newly emerged larvae. Alternative treatments (such as pyrethroids) only kill the adults, so spray timing is much more critical than for chlorpyrifos.”

Chlorpyrifos is currently undergoing re-registration as part of the routine evaluation of actives by the UK’s Chemical Regulation Directorate.

But there are new EU assessment criteria that are more stringent and using chlorpyrifos would require having buffer zones of 150m around orchards and 70m for arable cropping. “These are clearly unworkable,” says Mr Norman.

However, the use of low-drift technology is not taken into consideration in decision-making and deploying these techniques can drastically reduce the risk of the active reaching water. But before the CRD can take it into consideration, the industry has to demonstrate uptake of the measures.

“If the industry can demonstrate a wholesale change in the way it is used, CRD could allow chlorpyrifos to be re-registered with the new measures.”

Therefore, Dow AgroSciences, Headland and Makhteshim – who all sell the active – launched the “Say No to Drift” 18 months ago. The aim is to encourage growers to use 20m buffer zones around surface water together with LERAP three-star-rated low-drift nozzles.

“Nozzle technology is really effective and by adopting them, you see a 90-95% reduction in drift,” he says.

The messages were pushed out at agronomist meetings, at shows such as Cereals and via the press. Nozzle advice cards were also produced and mailed out to growers and were also available on the Say No to Drift website.

A key part of the initiative is measuring uptake and grower awareness of the campaign and this has been done through the annual pesticide use survey, using a combination of postal and face-to-face questionnaires.

For arable growers, uptake was already good and results confirmed 80% were using the nozzles. On the orchard/fruit side, only 6% were using the low-drift nozzles for chlorpyrifos in 2011, but a year later this had increased to 88%.

“This was a large shift in use,” says Mr Norman, but adds that he would like to see uptake rise even higher across both sectors.

What puts the achievement into perspective is that moving to a coarser spray was a big cultural change in the horticulture industry. While trials showed no effect on efficacy, the spray looks very different in the air.

“We are not there yet, but we have met with the authorities on two occasions, last time being December 2012, and they are really impressed with the progress. Now we are waiting for a definitive report from the DEFRA Pesticides Usage Survey Group, which is due after this season, and we are looking to supply the data to CRD in the fourth quarter of the year.

“I’m optimistic for the future of the active. It seemed daunting at the start of the programme, but it shows what can be done,” says Mr Norman.

Backward wheat crops could be at greater risk from orange blossom midge, as the delayed emergence of midges may coincide with the critical growth stage (53-59) of wheat.

But ADAS entomologist Steve Ellis adds that it’s still too early to know, as there are many uncertainties such as how the recent cold weather has affected emergence.

“We are currently monitoring saddle gall midge and emergence is behind, so I suspect it could be the same for orange blossom midge.”

ADAS monitoring will start in mid-May with the aim of giving growers an indication of midge risk. He urges growers to check the monitoring reports on the Dow Pest Watch website.