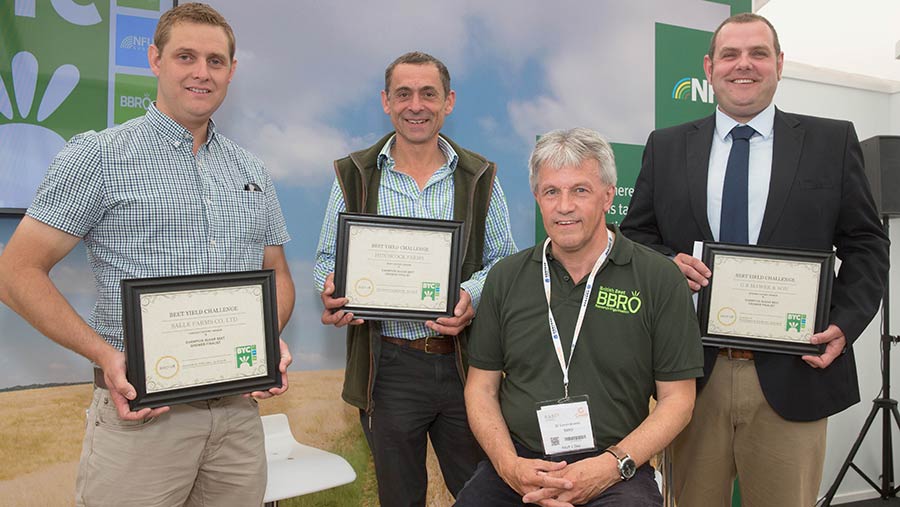 All four farmer finalists in the industry’s first yield competition fought off strong competition in what was a record beet-growing season and very high-yielding year.

The four finalists of the Beet Research Organisation’s (BBRO) Beet Yield Challenge are Guy Hitchcock of Hitchcock Farms in Suffolk, Will Jones from Salle Farms in Norfolk, GR Mawer and Son from Grimsby and Mark Means of JS Means in Norfolk.

The overall winner is set to be revealed at the Royal Norfolk Show at the end of the month.

This represented 73.5% of estimated potential yield – something the BBRO described as phenomenal and due largely to favourable early summer weather, which drove rapid crop canopy development.

Grown on a range of soil types with different cultivation practices, drilling and lifting dates, the crops entered in the challenge provide a unique barometer of UK sugar beet production and have helped to highlight some key focus areas, said Simon Bowen of BBRO.

“It came as no surprise to us that attention to detail at each key stage of production is what separated the good crops from the very good crops.

“This applies right from primary soil cultivation through to delivery at the factory,” Dr Bowen said.

Given the very dry start to the 2017 growing season, soil management and seed-bed production were challenging and resulted in delayed emergence and some patchy establishment – which is where between 12-17% of potential yield was lost.

“It reinforced the importance of seed-bed quality and achieving the recommended 100,000 established plants/ha. All of the highest-yielding crops, including the four finalists, had plant populations in excess of 100,000/ha.”

But the stand-out feature and base for high yields in 2017 was the very rapid canopy development in May and June, revealed Dr Bowen, with those crops that reached higher crop cover scores by 21 June having the greatest yields.

“We had higher-than-average rainfall in early summer, which helped, as soil moisture is key at this stage.

“Attending to crop needs in this rapid-growth phase is also important, so adequate nutrition proved essential. Checks to growth from herbicides and bird and pest damage were kept to a minimum in the best crops,” Dr Bowen said.

An effect of organic manures on this key early growth stage was noted, with the average yield of crops receiving manures being 106t/ha, compared with an average of 93t/ha where no manure was applied.

Protection from foliar disease also played a role in the results, with vigilance for the first signs of disease helping with optimum spray timing and product choice. While most crops received two fungicides, a third spray was cost-effective for later-harvested crops.

“Where the number of sprays was tailored to expected harvest date, there was an impact on yield,” Dr Bowen said.

Later harvest dates gave higher yields, but highlighted a tendency for crops to achieve a lower percentage of their potential, he noted.

“The longer the crop is left in the ground, the wider the range of variables it is subjected to. Again, it’s down to detail – selecting the right fields, varieties and agronomy programmes can all make a difference with later-harvested yields.”