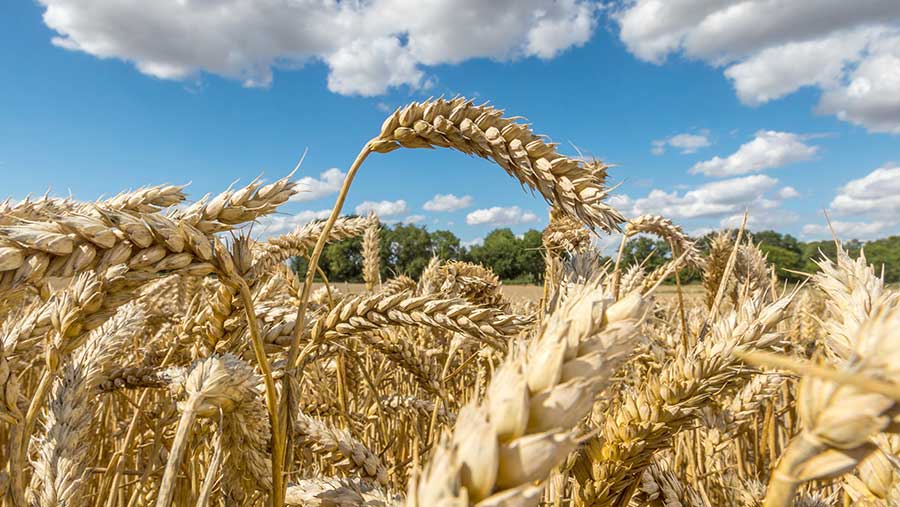 An in-depth technical knowledge and a familiarity with fertiliser and pesticide products gained from Alex Wilcox’s parallel career as an agronomist helped him deliver the award-winning crop of milling wheat in the very challenging 2018 season.

Mr Wilcox of A&J Wilcox, who combines running an all-arable farm near Downham Market with a career as a full-time agronomist for Hutchinsons, managed to overcome strong challenges from last year’s winner Sam Markillie and Essex grower Richard Carr.

His YEN milling wheat quality award entry, a sample of Group 1 stalwart Crusoe, yielded 12.2 t/ha and had a protein level of 13.1%, giving 1.6t/ha of grain protein.

Like other samples from 2018, its slightly too resistant gluten was a feature associated with the hot, dry year.

The milling wheat area is split equally between Crusoe and Zyatt, to spread the risk and help manage harvest. 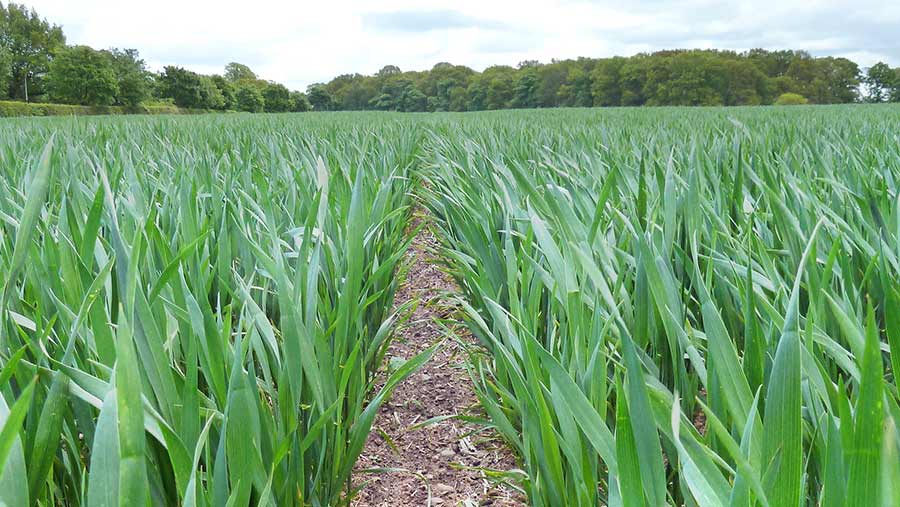 “Crusoe will lose its Hagberg quite rapidly once it’s fit, so we always aim to harvest it as a priority,” he says. 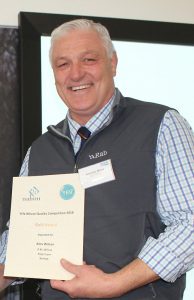 The winning crop was drilled in late October, in line with his blackgrass management strategy, at 350 seeds/sq m.

The field had been ploughed for the first time in five years, as rotational ploughing is used as a re-set button and to help with weed seed burial.

“We plough at a steady speed and make sure that we fully invert the soil, so that weed seed is skimmed into the bottom of the furrow where it is out of harm’s way,” says Mr Wilcox.

This year, he has increased seed rates slightly, responding to theYield Enhancement Network (YEN) report feedback, upping them by 25 seeds/sq m to get maximum ear numbers and make the crop as competitive as possible against blackgrass.

“We are slowly but surely getting on top of blackgrass,” he reports. “The farm had a serious problem with the weed when we took it on, but we’ve improved the situation by combining cultural and chemical control techniques and sticking to our plan.”

A policy of continuous improvement of the soil is in place, with organic manures being incorporated for a number of years. Biosolids from Anglian Water and paper crumble have both been added – the latter to provide soil conditioning and nutrition, as well as to prevent any lock-up of nutrients.

“Over that time, soil health and structure has really improved. We can travel on the land for most of the year and our earthworm count has shot up.”

His winning crop received a total of 210kg/ha of N, with both prilled and liquid nitrogen being applied, according to growth stage.

Mr Wilcox started the fertiliser programme with Axan (27N, 9S), putting on 90kg in the first split, following up with another two applications.

As Axan also contains sulphur, the crop received a total of 70kg/ha of sulphur trioxide. “Axan is a premium product, but it spreads very well and suits our system.”

The final Axan dose of 50kg of N was applied as close to ear emergence as possible, with 10 litres/ha of Nitamin being mixed in with the T3 ear spray. Nitamin is a liquid form of nitrogen and was favoured for its crop safety and ability to get into the plant rapidly.

“It tends to be used more widely in potato crops, but I’ve found that there’s no scorch or check to the crop with it. It greens it up and can be mixed in safely with the ear wash spray.”

For micro-nutrition, he used a phosphite-based treatment to encourage rooting and boost tiller numbers, adding 1 litre of Phorce split evenly between the T0 and T1 sprays.

He also used up to four applications of Manzi, a nitrate/manganese/magnesium/zinc mix, starting early in the growing season and including it with each fungicide, to help maintain tillers and produce biomass.

The fungicide programme, which cost £110/ha, consisted of four sprays and started at T0 with azoxystrobin + chlorothalonil, to get on top of any rust already in the crop and protect against septoria.

It was followed by a T1 application of cyproconazole + propiconazole + chlorothalonil, so that different triazoles were being used to the ones planned for later sprays, in a plan to reduce the risk of resistance.

“Our policy is to use the older azoles, propiconazole and cyproconazole, at T1, saving epoxiconazole and metconazole for T2 and prothioconazole for T3. That way we are unlikely to be selecting for less-sensitive septoria strains early in the programme.”

The flag leaf spray was based on SDHI fluxapyroxad, with epoxiconazole + metconazole added for comprehensive disease control.

Last year’s dry conditions allowed rates to be kept in check and meant that a 21-day interval between applications was straightforward to achieve.

The T3 was a prothioconazole/tebuconazole + pyraclostrobin mix, aimed at keeping the ear clean and preventing late brown rust.

The strobilurin component brings more than rust control, believes Mr Wilcox, who also sees a physiological effect on the crop.

“We were fortunate that 2018 was a low disease-pressure year and that the dry conditions continued into harvest,” says Mr Wilcox. “It was one of the easiest harvests that I can remember.”

Sam Markillie of Wisbech in Cambridgeshire and Richard Carr of Maldon in Essex took second and third place, respectively, in the YEN milling wheat quality challenge.

Both used a four-spray fungicide programme, with the slight difference in their preferred spray timings reflecting local disease challenges and previous experience.

Around 70-80kg/ha of sulphur was applied to both crops, while Mr Carr’s lower nitrogen requirement of 180kg/ha reflected his use of poultry muck.