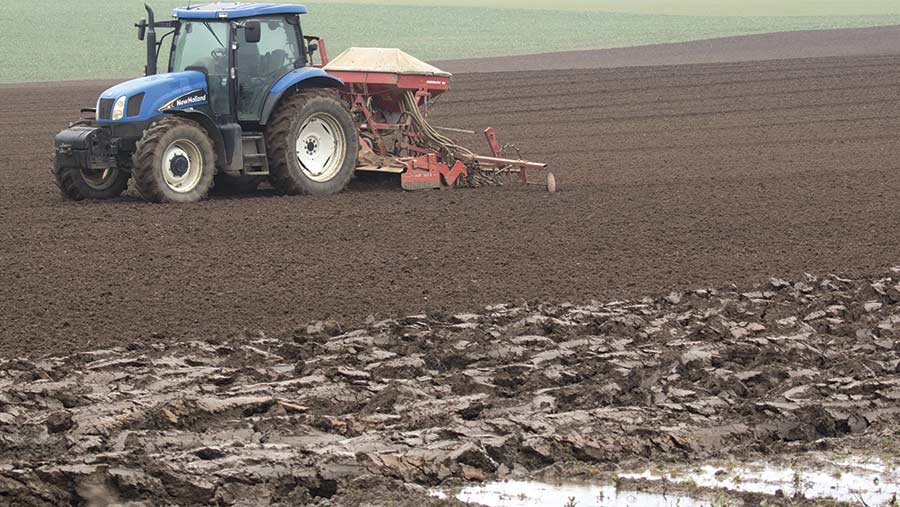 Time has nearly run out for drilling winter wheat crops, leaving farmers to decide which spring crop to grow or even whether to fallow areas that remain undrilled after one of the wettest winters in living memory.

The prolonged wet weather has resulted in only about 60% of the planned winter wheat area being drilled. In some cases, growers have virtually no winter crops in the ground.

In the coming days, growers will be deciding on how to salvage their season, as they try to limit the damage to their rotations and cash flows. Here we look at some of the options.

One option is to stick with winter wheat if conditions allow, as this helps to limit the damage to rotations and gross margins. However, for many farmers time is running out.

One variety suited to late drilling is Skyfall. Cathy Hooper, RAGT’s technical seeds manager, says it can be drilled up to the end of the first week of March, given the right seed-bed conditions.

Trials carried out over the past four years with Agrii, looking at February/March drilling, have seen good yields. For example, in 2015 a trial in Hampshire saw a yield of 9t/ha and the following year Throws Farm in Essex saw 7t/ha.

“We are seeing better yields than with spring wheat and RAGT is happy to back drilling up to the first week of March,” Ms Hooper says. Growers are, however, advised to drill at 350-400 seeds/sq m.

However, Independent arable adviser and farmer Roger Seed, based in Buckinghamshire, says that looking at the forecast and current ground conditions, many growers in wetter areas and on heavier lground will now be moving to spring cropping.

“Ground conditions are nowhere near good enough near fit to create a decent seed-bed in most situations and time is running out for late drilled winter crops,” he says.

With mild weather forecast to continue, there is the increasing risk of insufficient vernalisation for winter wheat, and there will also be a point when the expected realistic yield for winter wheat generates a lower or riskier margin than a spring crop.

When considering which spring crops to drill, opting for a cereal will help maintain the rotational balance if wheat is the crop that was not planted in the autumn.

“You can still have a break crop next autumn,” Mr Seed says. He recalls the 2012-13 season, which was also very wet, where it took some farmers two to three years to get their rotations back on track.

While a spring cereal may be the obvious choice, the lack of available spring wheat seed and the cost of it means barley is probably the go-to option for most.

The difficulty this year is that because of an expected large barley area being planted and a shortage of wheat, the barley price for harvest 2020 is now heavily discounted. Depending on where you are in the country, November feed barley is currently trading at more than £30/t below feed wheat.

Therefore, many farmers arecurrently weighing up the agronomic risks of growing late-drilled winter wheat against the market risks of switching to spring barley.

Despite the forward price difference, there is a point at which barley comes into play, even on heavier ground where malting quality isn’t a likely outcome.

For example, a spring feed barley pushed for yield at 7.4t/ha has a broadly similar gross margin to a 6.6t/ha late-drilled feed wheat crop, or a 6.1t/ha milling wheat crop.

A 6.75t/ha malting barley crop could equate to 6.2t/ha of winter milling wheat or 6.7t/ha of feed wheat.

These figures may initially tempt some growers to stick with wheat but the return from barley should be agronomically less risky, and also achievable from a much wider planting window than that left for late drilled wheat.

Mr Seed stresses that the figures are very sensitive to market prices and costs, so it is crucial that farmers do their homework, research their market by talking to their merchants, and then prepare their own budgets carefully with their agronomist.

Pulses are another option, with some attractive contracts for peas. However, growers need to be prepared to give quality pea crops the attention they need, especially at harvest.

“They need to be prepared to drop everything and prioritise harvesting peas to maintain quality, and the loss of diquat this year is arguably going to make quality retention harder to achieve,” he says.

Beans can also have a place, and although the gross margin may not look that attractive on paper, there are additional agronomic benefits.

“Pulses, when considered in the wider context of the overall rotation, can also help to increase the percentage area of high gross margin first wheat, the additional area of first wheat in the rotation compensating for the lower-margin beans”, he explains.

Linseed is another option and, being a late driller, it could have a role for those growers looking to spread the workload at drilling and again at harvest, alleviating some of the pressure.

Spring oats are increasing in popularity despite the wet autumn, with some growers seeing this is a better option than winter oats from a blackgrass control perspective, and there are naked oat options too.

And for some there may be the opportunity to look at crops like maize or sugar beet for anaerobic digestion. These options can also generate a reasonable return, but the remarkable weather last autumn highlights the risk of these later-harvested, bulky AD crops.

Whatever you decide to grow, Mr Seed says that in a year like this it’s more important than ever not to enter into certain types of forward sales contracts that can result in substantial default charges if delivery volumes or quality are not met.

“Clarify what you are signing up to, and make sure you understand any risks.”

For areas that are in poor condition and where yields are expected to be low, fallowing could be an option to get soils back in shape ready for next autumn.

However, Mr Seed is not a fan of bare ground fallow. “A cereal crop yielding 5t/ha won’t necessarily add to profit, but it may still make a valuable contribution to the residual overheads of the business,” he says.

If the ground is in extremely poor condition and needs remedial work, it may be more sensible to use this year to get the ground back into condition.

But in his experience, bare fallow is the worst option, as some form of vegetation such as a cover crop will at least help to remove moisture and improve soil structure.

Fallowing is likely to be more attractive for a contract farming landowner where labour and machinery contract charges are likely to be higher on the land concerned. An in-hand farm may find the marginal extra costs worthwhile.

What about the left over winter wheat and barley seed? 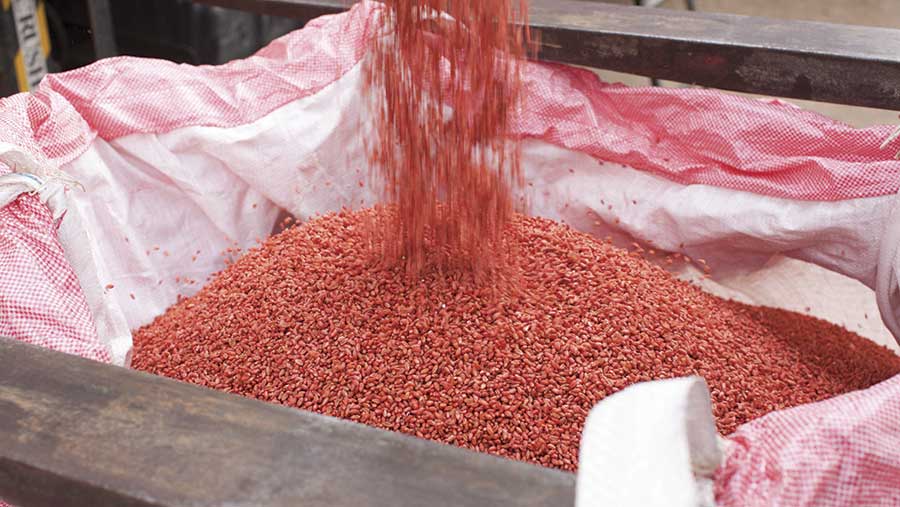 Provided seed is stored in the right conditions (cool, dry, dark and away from vermin), it can be safely kept over the season for drilling next autumn.

Seed dressing manufacturers such as Certis, which makes Latitude (silthiofam), say they cannot guarantee the germination and efficacy of treated seed that has been over-yeared.

However, Andrew Bourne, seeds manager at Denne & Sons, is confident with seed from last harvest.

“If you have good quality seed, as seen in our part of the world last harvest, and the seed dressing was applied correctly, we would anticipate that germination levels will remain at reasonable levels for planting next autumn.”

He adds that had it been the 2018 crop, when specific weights were low and germination and vigour had been compromised, there would be concerns. “But the 2019 crops had good specific weights and low moisture.”

He advises farmers to get seed tested for germination, although he adds that vigour is a separate factor and does not show in lab tests.

On that basis he recommends prioritising over-seasoned seed, drilling it first when conditions are better and then planting new seed later when conditions could be more challenging.

To help winter barley growers, Syngenta is offering UK growers free germination testing of undrilled 2019 seed of its hybrid winter barley varieties that will be carried over for planting in autumn 2020.

Open to UK growers only, and applying to Syngenta hybrid barley seed originally purchased for planting in autumn 2019, up to two free germination tests per grower are available, says hybrid barley manager Mark Bullen. Seed must be stored and sampled correctly, he notes.

“We are not expecting major reductions in germination from over-yearing hybrid barley seed,” Mr Bullen says. “This is just our way of supporting growers after the difficult autumn and providing them with the best information on what rate to drill the seed at this coming autumn.”