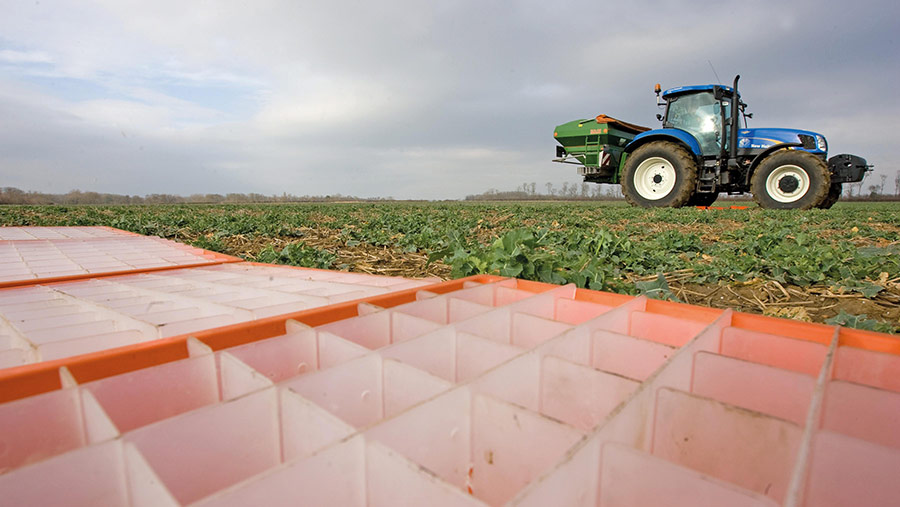 Not many people foresaw the rapid rise in fertiliser prices this autumn, even those fortunate enough to have bought at what now looks like the bargain June new-season price of about £300/t for 34.5% ammonium nitrate.

Even that was over £100/t more than the year-earlier price, which led to some holding off from buying, hoping prices would reduce.

Unfortunately, the opposite happened, with prices doubling in just two months, and no signs of any reductions with current prices around £650/t (see “imported ammonium nitrate fertiliser price (34.5%N)”).

At that high level the breakeven ratio – the relationship between nitrogen price and grain value that influences the economic optimum nitrogen rate – changes significantly from previous years.

It’s usually only worth adjusting if the breakeven ratio is some distance away from the standard value of five currently used by the AHDB’s Nutrient Management Guide (RB209).

But at current fertiliser prices, the breakeven ratio is more than 10, which equates to a reduction of 45-65kg N/ha when using the AHDB’s fertiliser calculator to adjust typical 220kg N/ha field rates – depending on how bullish you are on expected feed wheat grain value.

Growers will, however, have bought nitrogen at a range of prices. That means it is crucial to work out your average cost for every kilogramme of nitrogen bought, says Edward Downing, Frontier crop nutrition technical manager.

“It’s key to understanding what your breakeven ratio is, and an indication of the level of adjustment required.”

For those who still have purchases to make, it will also influence how much more nitrogen they will require as the recommended rate changes, says Tim Kerr, Hutchinsons nutrition manager.

“The starting point is what product you have in store, what it cost and whether you need any more.”

By considering what you need for a normal recommendation, you will see if the cost a kilogramme takes you to a point where you need to reduce your optimum rate, he explains.

There are a lot of moving parts to consider: grain price, nitrogen cost – including calculating the value of nitrogen in compound fertilisers – and the total amount of fertiliser required, as the economic rate changes in response to those factors.

Understanding how much to adjust in the field is also a nuanced decision, Mr Downing says.

“If two growers take 50kg N/ha off their nitrogen rate, they could get quite different outcomes, because the fertility background of the fields, the yield potential and their historic fertiliser use could all be different.”

One way of judging the possible effect on yield is looking at historic grain nitrogen or protein results, preferably on a field-by-field basis, as stored grain results are likely to mask differences.

Frontier, rather fortuitously, started offering such a service last season as a pilot, Mr Downing says, as does Adas through YEN Nutrition.

“Even if it is from the shed, looking at grain proteins will give you an indication of what adjusting nitrogen rate might produce.”

Historic grain proteins on feed wheat of more than 12% could be a sign of overapplication, so a 50kg N/ha cut would make less difference to yield, while the opposite is true for grain protein levels of less than 10%, which might result in a bigger financial penalty, he says.

With a risk of fertiliser prices remaining high, Mr Downing says it is important this season to look at nitrogen rates and use, and experiment, even if fertiliser has been bought at lower prices.

“Learn as much as you can this spring. For example, if you’re cutting back, I’d encourage you to have a couple of areas on the farm where you don’t, to measure the effect on yield and grain protein.

“Then, in a year’s time, you will be more confident about what adjustments you can make.”

Once a decision has been made about purchases, the biggest priority is to make the most efficient use of it during the season.

“We need to prepare as an industry to manage fertiliser prices at higher levels,” says Mr Kerr. “It’s important to make fertiliser use as efficient as possible, not just because of the price, but for environmental reasons.”

The following are Mr Kerr and Mr Downing’s suggestion for improving nitrogen use efficiency.

1. Measure nitrogen in the soil

While RB209 provides guidance and tools to optimise fertiliser application rates, an alternative method of using field measurements, such as CF Fertiliser N-Min test to estimate how much nitrogen will be supplied by the soil, could provide valuable savings, Mr Kerr suggests.

“This is particularly the case if cover crops or manures are being used in the rotation, or naturally fertile soils – it could allow for more precise nitrogen applications.”

“But you do need some measurement to nuance recommendations.”

With availability of fertiliser tight, many growers have been buying different products than usual, Mr Kerr says.

“Accurate spreading is a cornerstone of good nitrogen use efficiency, so it’s important to not just use the same spreader settings as before and assume it will spread accurately.”

Spreader tray tests, which typically cost about £250, include an MOT-style examination of the spreader equipment, fertiliser characteristics analysis to help determine how the product spreads, and a full-width spread pattern tray test to achieve the best possible application pattern.

3. Limit losses during and after application

Early-season nitrogen applications can be at risk from leaching losses, says Mr Downing.

It’s a balance between having enough soil moisture to help nitrogen to be taken up by plants, and too much for it to leach from the field.

“When deciding when and how much to apply, assess the risk in your soils, look at the forecast, and understand what growth you have to take up the fertiliser.”

Leaching losses can also be reduced by using nitrification inhibitors, which slow down the breakdown of ammonium into nitrate, while urease inhibitors reduce the volatilisation risk from urea fertilisers.

Nitrification inhibitors are used to allow more nitrogen to be applied in one hit to reduce the number of passes and create an application cost saving, while urease inhibitors can prevent direct nitrogen losses of up to 40%, explains Mr Kerr.

“Both can help improve nitrogen use efficiency, with the benefits – especially from urease inhibitors – likely to outweigh the cost while nitrogen prices are at their current high,” he says.

“Their use helps you get the most from the nitrogen you are applying.”

Nitrogen use efficiency can be improved by boosting rooting and soil structure to make it easier for the crop to forage for and take up nitrogen.

Fortunately, this season most crops have established well with decent roots in favourable autumn conditions, but biostimulants can be a useful tool to improve rooting where needed, Mr Kerr suggests.

Other nutrients are crucial for effective nitrogen uptake and use, Mr Kerr says. “We risk underplaying this requirement.

Sulphur is the obvious one, because you need a fixed ratio of nitrogen to sulphur for the nitrogen to be assimilated into amino acids and proteins.

“The simplest thing is applying the sulphur the crop requires, because you can no longer rely on atmospheric deposits.”

With some growers considering reducing or missing out sulphur applications because of reduced nitrogen rates, he warns that it is more important to put the correct ratio of sulphur on to avoid reducing the effectiveness of the nitrogen that is applied.

With availability of NS products challenging, there are alternatives such as Polysulphate or Potash Plus that will provide sulphur, as well as potash, which is also essential for growth.

Applied in early spring, they provide a phased release of sulphur throughout the spring.

It’s also worth checking pH levels, says Mr Downing. “It’s a basic thing, but the quickest way to reduce nitrogen use efficiency is to grow crops in acidic soils.”

Fine-tuning applications to potential yield and changes in grain prices can also help optimise nitrogen use.

Applying in larger doses that the crop is unlikely to take up in one go creates more risk of leaching or volatilisation and, therefore, inefficiency.

“A big strength of little-and-often applications is the ability to assess the crop better to fine-tune applications.”

Adas trials comparing little-and-often applications with conventional approaches has shown increased uptake efficiency in about half the trials, with benefits to yield in nitrogen-limiting conditions.

“It’s not always going to show a big response,” says Mr Kerr. “But it’s a good way of managing risk if it is practical to do.”

7. Use digital tools to fine-tune applications

“Biomass imagery is a great way to see crop growth develop and assess yield potential, as they are closely related,” says Mr Downing.

“You can then fine-tune applications between fields and in fields. We need to be quite hard on crops to assess whether a crop deserves what we had planned for it.”

8. What about foliar nitrogen?

Foliar nitrogen is more expensive than bagged nitrogen, but it can be more efficient in some situations, Mr Kerr says.

“If you can bypass the soil without damaging the crop to get the nitrogen through the leaf, you can increase nitrogen use efficiency.

“You need to use it carefully, preferably using products that are formulated to provide crop-safe foliar nitrogen. We’ve found it valuable in providing nitrogen during extended dry periods in a season that has started to compromise uptake.”

“Using it in these crops might give more scope to use that bagged N in other crops.”

High fertiliser prices have concentrated more attention on organic forms of nitrogen, such as digestate, slurry and farmyard manure as potential sources.

“It’s very difficult to accurately spread bulky, solid manures on a growing crop, for example, and it is much better to use on a stubble ahead of a spring crop.

“There is equipment to apply digestate and slurry, which have more available nitrogen anyway, but remember they are variable, so be careful about what they will deliver in the programme. Don’t overrely on them.”

What about milling wheat?

“Understanding the difference can be a challenge – it might be anything from 50kg to nearly 100kg N/ha to turn a feed crop into one that you are confident will produce a milling specification.”

At that point you can determine, using your average nitrogen spend, on what that extra nitrogen will cost.

With milling wheat premiums currently at about £40/t, albeit for last season’s crop, even at today’s nitrogen prices most milling wheat would pay for the extra nitrogen.

“It’s a judgement about the potential return and the likelihood of hitting the quality required. I’d make that decision as soon as you know your average nitrogen cost.”