The chaff deck in action on Jeremy Durrrant's Essex farm

The use of a combine chaff deck at harvest, which dumps the chaff along with most of the weed seeds in the tramlines, was so encouraging last summer for one Essex grower that four more farmers are testing the technology this harvest to help control grassweeds.

The deck is fitted on the back of a combine and separates the straw from the chaff and then places the latter in the tramlines. When used for the first time on a UK farm in 2017 it achieved good control of troublesome blackgrass.

Having established that this Australian technique does work in the UK, the team behind the trial is now extending it to evaluate the machine’s role and value with harvest weed seed management.

The test of the chaff deck, which took place on the Essex farm managed by Jeremy Durrant (see panel), revealed a sixfold rise in the amount of weed seed in the tramlines compared with the rest of the field.

Given the initial findings and interest in the concept as part of an integrated approach, it is being given a wider assessment on farms in Leicestershire, Northamptonshire, Norfolk and Nottinghamshire. 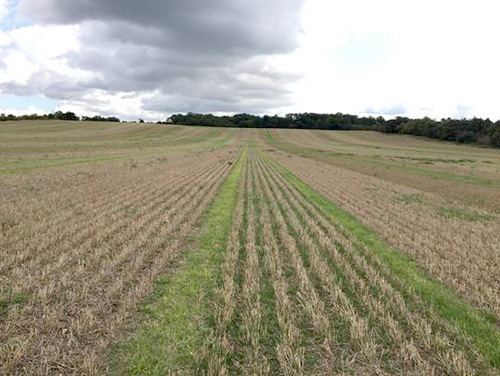 Weeds were allowed to grow in the tramlines to check numbers

Paul Fogg of agronomy group Frontier explains that the chaff deck exploits the fact that some weed seed is retained in the head of the parent plant at maturity, rather than being shed before the combine arrives.

“The amount retained does vary with the weed species. There is more work needed on the numbers, but in a hybrid barley crop as much as 50% of blackgrass seed can still be in the head at harvest,” he says.

“In wheat, it is likely to be a bit lower, as blackgrass seed is shed over time through July and August,” adds Dr Fogg.

Either way, there is enough seed retained for the chaff deck to have an effect and make a contribution to overall weed control. “If there was only 10% still on the plant, it wouldn’t be worth doing,” he says.

Fitting a chaff deck allows the chaff to be captured at the back of the combine and arranged in two 30cm rows behind the back wheels, rather than being spread across the width of the swath.

As 95% of weed seed entering the combine exists in the chaff and not the straw, tramlining it allows the weed seeds to be placed and managed.

“Given the grassweed challenges that many farmers are up against, it doesn’t seem sensible to spread the chaff and distribute weed seeds widely across the field,” Dr Fogg points out.

The weed seeds are put straight into the wheelings – usually a hostile environment for germination and an area prone to compaction – so weed emergence is delayed and reduced.

Having them all in one place means that a much smaller part of the field area is affected and any seedlings that germinate must compete with each other.

An initial observation was that the germinating plants are smaller and produce less seed, and what Dr Fogg saw was that chaff acts as a mulch and the weed seeds can compost.

In Essex last year, volunteer cereal seed fell to the bottom of the chaff line – probably due to its greater specific weight – and germinated quicker.

“The weeds seeds, which were held up in the chaff, then germinated later, after a rainfall event,” he adds.

The best way of managing the chaff lines is under review – the concentrated weed seed may decompose in the chaff or it may need targeted spraying once it has germinated.

Farm manager Jeremy Durrant of EW Davies Farms completed 1,250ha of harvesting in 2017 with the chaff deck fitted to his Claas Lexion 780 combine.

Wheat, barley, oilseed rape, oats, linseed and beans were all combined without any issues or delays, with Mr Durrant finding 30-50% of weed seeds still in the ear.

He admits to being surprised by the amount of blackgrass seed remaining on the plant throughout the harvesting operation, but is unsure how much of that was on secondary tillers or on later germinating weeds.

“It would be useful to have some research on retention at maturity. Currently, there is a gap in the knowledge,” he says. 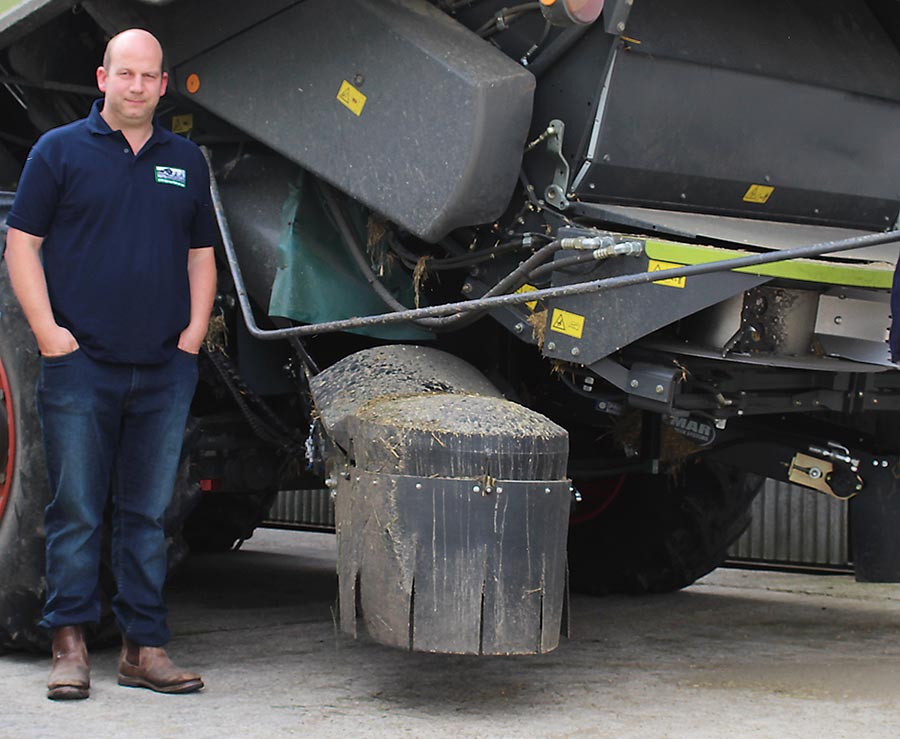 The main trial was conducted in a field of hybrid barley, where the average blackgrass population was 219 plants/sq m. The crop was harvested on July 14, 2017.

“There was some moisture in the ground, which was then sealed in by the chaff. So the heavier seeds of the volunteer barley plants within the lines germinated very quickly,” he says.

These were sprayed off to prevent them competing with the following oilseed rape crop, as well as with any emerging blackgrass. The rape crop was established with minimal soil disturbance, before blackgrass plant counts were done in October.

The counts revealed that the chaff tramlines had 274 plants/sq m, whereas the background field population was 46 plants/sq m.

The tramline weeds were left to grow in the first year, so that numbers could be recorded and any effect of further natural wastage could be gauged.

“Every time that we consolidate, there is a reduction in weed numbers,” says Mr Durrant.

He predicts that there will be a natural reduction in weed numbers over a two- to three-year period, with seed being shed and landing in the same place over time. Any blackgrass plants can then be removed by roguing or with glyphosate.

“It’s giving us a concentration of blackgrass and a way of managing the seed. Obviously you need to combine in the same place each year for it to work,” he adds.

Cultivating at an angle has been tested on the farm, without the chaff being spread or weed seeds distributed across a wider area.

“The lines didn’t move. It’s much the same when you haven’t created the best seed-bed and need to do some remedial work – the seed germinates and still comes up in rows,” Mr Durrant says.

He has also seen a positive effect of chaff tramlining on slug control, particularly following oilseed rape, as the slugs tend to remain in the chaff lines and are run over.

Otherwise he relies on a pre-emergence residual herbicide programme to get good blackgrass control, as well as other cultural control methods.

“It’s likely that we would write the purchase cost off over 10 years, so that brings it down to 96p/ha,” he says.