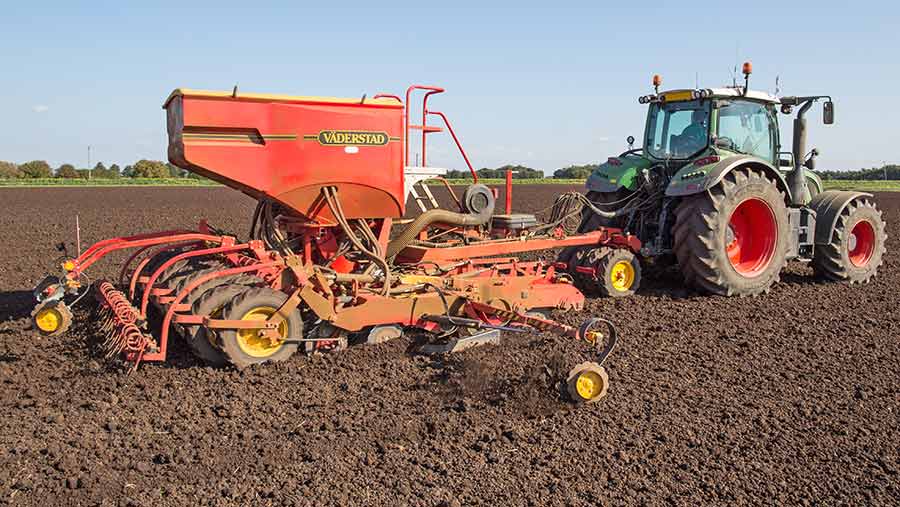 A fens grower forced into spring cropping by an untenable blackgrass population is set to return to winter cropping this season after tackling his weed problem.

Lincolnshire farmer Chris Richardson’s blackgrass population on the worst fields was estimated to have reached more than 1,000 seeds/sq m, resulting in wheat yields halving to just 5t/ha in the worst areas.

With the switch to spring cropping at Cobthorne farm, Mr Richardson’s son, Farmacy agronomist Alex Richardson, took the opportunity to conduct trials into cultural control methods to find the best way of tackling the weed on the farm’s heavy marine clay land.

Now, after three seasons, there has been a 95% reduction in blackgrass numbers – a sufficient reduction to enable a return to a more balanced rotation, Alex says.

Selecting a 12ha field particularly affected by triple-R resistant blackgrass, in the first year Alex split it into sections and either ploughed, shallow cultivated with tines or discs, or sub-soiled alone, and then rolled once, twice or three times.

Using shallow tines or discs and rolling twice for consolidation was found to be the best measure for generating blackgrass stale seedbeds which were subsequently sprayed with glyphosate.

Following a cover crop, half the field was drilled with spring milling wheat and half with spring malting barley using three different seed rates – 350, 450 and 550 seeds/sq m.

For spring barley, a rate of 450 seeds/sq m provided the best competition and the highest yield, while for less competitive spring wheat, a higher seed count of 500 seeds/sq m was more successful.

With an average yield of 8.4t/ha for spring barley and 8.75t/ha for spring wheat, this first year showed that both crops can be successfully grown in the affected field and meet milling and malting specs, thus delivering a decent gross margin.

With the basics of the right way to establish a spring crop in place, year two focused on nutrition and selecting the right variety.

For spring wheat, Belepi stood out as having a greater green index. For spring barley, while the individual varieties were difficult to distinguish between, Laureate yielded the highest, with the overall average spring barley yield dropping in the second year to 7.5t/ha.

On the fertiliser side, it became clear from the trial that fertiliser placed with the seed rather than spreading improves tillering and, therefore, competition with the blackgrass. Crops established with seed-bed fertiliser also yielded better.

However, di-ammonium phosphate outperformed Double Top (ammonium sulphate and ammonium nitrate) when both were placed rather than spread.

Di-ammonium phosphate resulted in 20% more tillers early on, increasing the level of competition and ground cover produced by the second cereal.

Although this difference in tiller numbers evened out as the season progressed, early competition is key in the fight against blackgrass.

During the second season of trials a small area consisting of just a couple of hectares was put back into winter wheat to see if the proceeding spring crop had had any effect on how a following winter wheat would establish and yield.

It also allowed Alex to clearly see the effect of each spring crop on blackgrass numbers, with winter wheat grown after a spring wheat having a much lower blackgrass population. However, the downside was that wheat didn’t establish as well after spring wheat.

Having gained all the knowledge he could from doing plot trials, in the third season Alex put the entire 12ha trial field into spring oats to give the field a take-all break and potentially be more profitable than other spring options.

The spring oats yielded 7.2t/ha, providing a decent gross margin but still with the opportunity for blackgrass kill.

For all the trials into the different variables, Alex says that simply switching to a spring crop has made a huge difference to blackgrass numbers.

After a single season the blackgrass seed population in the trial field dropped by about 50%.

“I think it is at a good enough stage now to go back into autumn cropping. This year some popped up in one field on lighter land, but we plan to look at some alternative spring cropping options to help combat the pressure.”

This is the first season the farm will be properly acting upon the lessons learnt through Alex’s trials across the whole farm, with the hope of achieving a winter wheat average of 10.5t/ha. 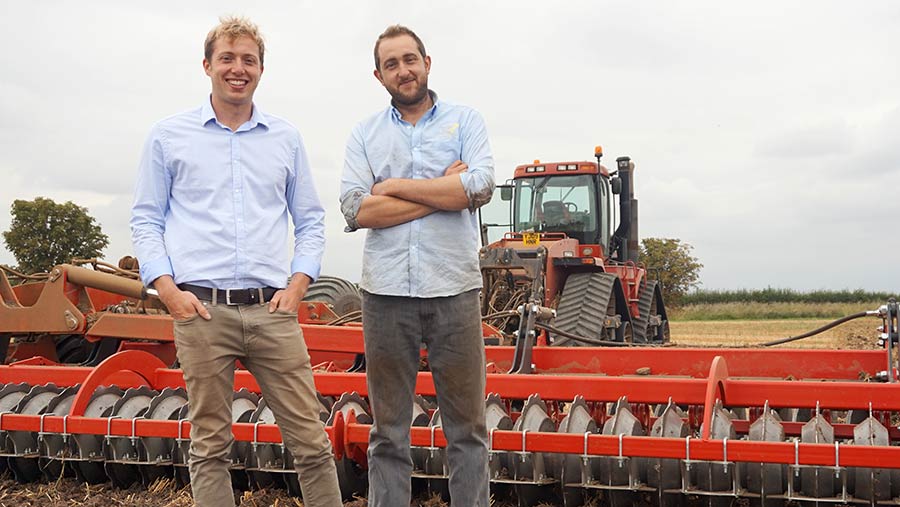 Alex and James Richardson with the prototype cultivator © Niamh Tye

Alex Richardson has invested in more machinery, including a 12m surface cultivator, as the key lesson from year one of his trials was that timeliness is everything with seed and soil management.

“We found that an extra 45% of blackgrass seed germinated if there was some form of shallow cultivation, as long as it rains, over leaving stubble,” he Alex.

This year they didn’t cultivate until the third week in August when there had been significant rain, and the extra capacity of the new cultivator meant they could go at the right time.

The cultivator is a prototype made by Alex’s brother James, who owns farm engineering company JR Machinery, and the plan is to add a tank and metering system to allow contracting work, drilling cover crops on other farms.

From year two’s work with fertiliser, all the phosphate fertiliser will be placed with the seed when it is drilled, with the plan being to customise a cereal drill to be able to place either liquid or granular fertiliser.

“Phosphate only moves a few millimetres per year so it will save on fertiliser costs and will also save on a pass with the spreader,” Alex says.

Over the winter there is also a plan to put together a 6m low disturbance subsoiler with narrow legs and narrow wings to work at depth, but which will also be easier to pull, saving on diesel and going better through the soil.