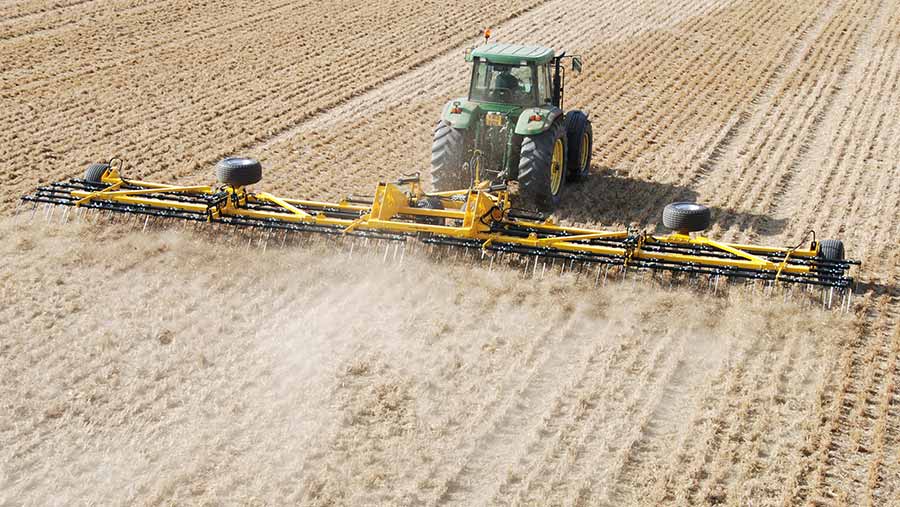 Ahead of drilling for the upcoming season, grower David Lord considers the best strategy for tackling blackgrass on his mainly heavy Essex soils.

The Essex grower is already four years into a long-term plan to keep on top of blackgrass which includes direct-drilling and spring cropping.

But he acknowledges it is an ongoing battle, and after suffering a late spring flush of the grassweed following the cold, wet spring this season, and poor competition from wheat, he is already adjusting his control strategy for next season, and into the future.

He was joined at Earls Hill Farm, Clacton-on-Sea, by soil and cultivation specialist Dick Godwin, and Ben Coombs, from Bayer, to discuss the best approach.

After min-tilling on his primarily London clay soils for 15 years, Mr Lord switched to no-till using a cross-slot drill four years ago as a response to the combined pressures of trying to cut labour costs and increasing blackgrass populations.

With poor drainage and heavy soils it was also proving difficult to achieve good seed-beds by cultivating.

A six-year rotation with more emphasis on spring cropping was brought in after 12ha were sprayed off in patches one year in an attempt to control the grassweed.

“We knew we couldn’t carry on like that so we moved to spring cropping before we were eventually forced to,” he says.

“We are trying to look ahead and get a system which will work for the next five or 10 years.”

Mr Lord had kept the worst blackgrass areas in spring barley for four years to try and compete out the weeds, before deciding to re-drain 14ha last year.

“We were still getting a blackgrass seed return from spring barley. It’s not the panacea people claim it is, and herbicides are limited.”

Mr Lord generally applies glyphosate to stubbles before drilling, with a contractor brought in to apply Avadex (tri-allate) on 20-24ha where there is a known grassweed problem, which Mr Lord says has helped.

Flufenacet is also a key part of the farm’s herbicide programme, but increasingly higher rates are being needed.

However, dry conditions this autumn meant pre-emergence herbicides were not as effective and when drilling was finally carried out in mid-October, a good weed-kill had not been achieved.

Despite this, when Mr Lord walked one of his farms this spring blackgrass did not appear to be much of a problem.

However, a late flush was allowed to take hold while wheat was slow to get going in the cold wet spring.

The blackgrass has also taken advantage of the lack of competition by producing high tiller numbers.

In an attempt to get on top of the problem, Mr Lord had hoped to employ a team of roguers to spray out the blackgrass with glyphosate, but due to staffing issues this never happened.

“In the past when we saw a little bit of blackgrass we wouldn’t have done much, but now we are on it.”

Mr Lord’s main aim for the upcoming season is to find a way of successfully stimulating the blackgrass to grow so stale seed-beds can be created ahead of drilling.

With cultivation not an option in his no-till system, he instead plans to rake the soil a few times to try and get the blackgrass to grow.

For spring crops, drilling the proceeding cover crop should be enough to stimulate the blackgrass, advises soil specialist Dick Godwin.

His analysis of Mr Lord’s soil reveals the benefits of having min-tilled on the farm for the past 20 years.

Despite the wet spring and droughty conditions later in the season, the roots on Mr Lord’s winter wheat had reached a good depth of 71.12cm when Mr Godwin measured them in early July.

The soil was also well-structured, with plenty of cracking. “There’s not much you can do with a machine to improve on the structure,” he says.

Blackgrass seed should be confined to the top 5cm of soil, but in a situation of a huge blackgrass population, ploughing to bury the seed would be unwise.

Unless soil conditions were just right, a plough is more likely to mix rather than fully invert the soil.

While Mr Lord could try and cultivate the top two inches, if conditions are at all wet, this is likely to result in the creation of a layer of slop due to heavy soils and poor drainage.

This is where the channel created by the disc on Mr Lord’s cross-slot drill, which pulls the water away from the seed, is especially useful.

He is clear that for all his efforts in the short-term, to get on top of blackgrass long-term he must improve drainage.

“All the worst land for drainage is the blackgrass land. We re-drained a field with a mole plough system and straight away we got a yield gain.”

“Drainage is the underpinning thing for us. If you have well-drained land it is the place to start for sure,” says Mr Lord.

But at £1,750/ha, drainage is only viable on the land Mr Lord actually owns, as with the rest on short-term lets, there is no incentive to make such a long-term investment.

Another way of achieving marginal gains long-term that Mr Lord is considering is by using a mechanical hoe, but is costly at £30,000 for a 5m hoe.

“It’s a big investment and I want to see results,” says Mr Lord, but if he does he would consider combining hoeing with precision application of flufenacet when the technology becomes available in the future.

Ben Coombs of Bayer agrees getting the right foundations in place is key.

“Blackgrass control needs to be about adding together different elements for marginal gains to get to the point where you are successful.

“Where the marginal gains come from doesn’t really matter,” says Mr Coombs. “But from a resistance strategy the addition of mechanical weeding is actually good.

“Chemistry is still a key part. Flufenacet at pre-emergence followed by a post-emergence when you have blackgrass in the field can take a good programme to the 98% level of control needed.

“But they are only ever the last throw of the dice, especially spring products, so anything that can be added to that is great.”