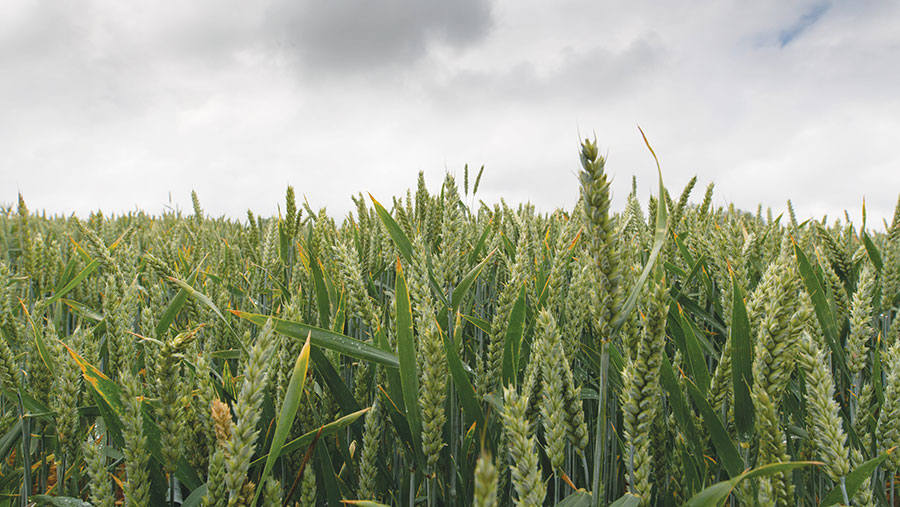 As the season to forget inches closer to harvest, it looks as if the short crops will make combining just as challenging as the rest of the year.

Spring barley, spring beans and oats have raced through their growth stages. The beans with pods so close to the ground will be a combine driver’s nightmare.

Brackling could also be a problem in some barley crops. It is caused by an upper internode growth surge resulting from the June rain, and these crops may need prioritising at harvest.

Finally, this season is the first in 20 years that one of our writers has seen grain aphids reach threshold levels, although there are no effective options left to control them.

A few thoughts on spring break crops this week. Perhaps oilseed rape has a future after all. My (albeit very limited) area of spring rape has excelled itself. The crop is now in full flower and alive with bees, branching is prodigious, and the recent rain has really helped it on.

See also: Why hemp is an attractive alternative crop to OSR

Minimal input costs and cheap establishment mean that any yield above 2t/ha will show a margin. Let us hope it does not flatter to deceive.

Spring beans are very short, and pods close to the ground are a real concern for combine operators. Now that rain has arrived, a fungicide based on tebuconazole and azoxystrobin has been applied.

Clethodim is still being used to deal with blackgrass. Pre-emergence mesotrione has needed a top-up with bromoxynil for polygonums. Weed control in linseed will be vexatious without this molecule.

Maize crops
Maize is an important crop in my area, either for own use or to sell to larger dairy herds. Establishment was tricky in the dry conditions and frost played havoc with late-April sowings.

Most crops have now recovered, and wet soils and high forecast temperatures will mean rapid growth. As the crop approaches the eight-leaf stage, we will need to consider treatments for eyespot.

Weed control has been effective, with particularly good performance from pre-formulated nicosulfuron + dicamba products. Knockdown on larger weeds where applications were delayed by the weather has impressed.

Spring oats have rattled through the growth stages and are heading. We hope the June rain has been sufficient to ensure decent specific weights and low screenings.

Preparations for winter wheat to follow these break crops are now in hand. One of the main tasks has been to check on the volume of pre-emergence herbicides left in stock on farm as we budget for autumn requirements.

Some desperately needed rain has finally fallen during the past three weeks or so, taking the June total up to 35mm, which is 5mm more than we had between 1 March and 31 May. Hope once again returns for harvest 2020.

T3s have been applied where required and, with the way the season has gone so far, it was no surprise that the welcome rain which ended the drought coincided with flowering, thus enhancing the threat of fusarium. Only time will tell whether that threat is realised.

Further fungicide applications will do little against fusarium, and will only serve to top up foliar disease control.

Disappointingly – and for the first time in more than two decades – I’m finding threshold levels of grain aphids on wheat.

It’s no coincidence, as 2020 is the first without neonicotinoid seed dressings in cereals, and our enforced universal reliance upon pyrethroids as chemical control means aphid populations in most crops remain largely untroubled by our interventions.

Perhaps the way forward is to breed and strategically release native predators in their billions – ladybirds, hoverflies, lacewings, ants and wasps – although I’m sure that approach wouldn’t be acceptable to the rabid raging serial influencers either.

Short crops
Spring wheat, oats and barley crops are now in full ear, with T2s applied. They are desperately short, though – I always find it unnerving to see cereals in full ear halfway up my shins.

However, a short crop isn’t necessarily a bad crop. Fingers are permanently crossed that all that stored energy is going into producing grains like lead shot.

Peas and beans are significantly shorter than we’re used to, but seem to be covered in flowers from head to toe.

Protectant fungicides are now being applied in these conditions that promote botrytis, grey mould, chocolate spot and downy mildew, along with necessary but largely futile attempts at the control of bruchid beetle in beans. Pea aphids and pea moth take no finding in the peas, either.

Sugar beet fields reacted to the rain like the Serengeti – we now have mottled green fields with full plant stands that vary from emergence to 20 leaves. Weed control is still a huge challenge – although the weeds don’t seem to see it that way.

There are blight conditions every day, so what’s the best – Smith or Hutton? There is only one way to find out…….Fiiiiight!

Another month has passed in an exceptionally challenging season. Winter barley is on the turn and harvest time is fast approaching. Yields will be exceptionally variable this harvest, and straw yields are likely to be poor after the lack of rain.

Thin winter crops after a dry spring, coupled with a recent shift in weather to wet and warm conditions, have led to late emergence of weeds in winter cereals – a frustrating finish to a consistently difficult season for this year’s winter cereals.

Weed control again has been hard in spring cereals. Dry conditions meant very few weeds emerged until recently, when the rain arrived at the same time as ear emergence – a difficult situation for chemical control!

Maize crops are very variable. Those under plastic have now fully emerged and post-emergence sprays have been applied where required. This has been in the majority of cases this year, again due to the dry conditions at planting.

Weeds are now growing back after the first cut, and this is a good opportunity for control where missed before first cut. In general, first-cut silage was high-quality, but delivered poor to average yields. Hopefully, this wetter weather is going to help provide more bulk at second cut to fill clamps.

The past few weeks have brought a change in weather to humid, thundery conditions and this has increased blight risk significantly. Hutton criteria was first met in my area on 14 June, so blight programmes have now been started. 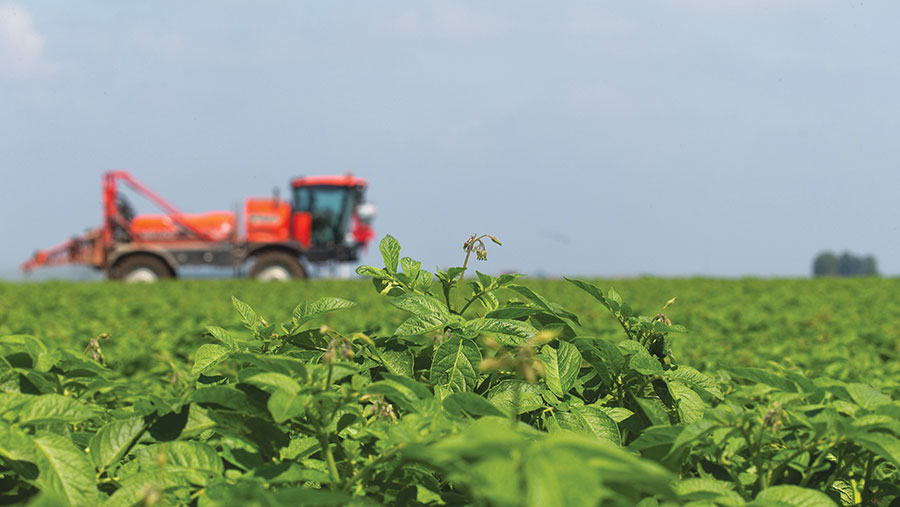 I can safely say this has been the most challenging season in my 27 years as an agronomist. It was a nightmare at the start, is anything but easy near the end and has given us barely a month of reliable growing weather in between.

The sporadic and highly localised rain of the past week has been welcome. Sadly though, yet again, it has been too little, too late for many winter crops on the Thames gravels. And even some of those on the brash ground are looking decidedly poor now.

It’s quite literally been a case of chalk and cheese, though, with wheat on the downland rewarding all the effort taken to get it drilled by early December. It won’t break any records, but, as we complete our T3s, it’s shaping up remarkably well.

With most of our wheats receiving no rain whatsoever during flowering, we’ve been less concerned than usual about fusarium and septoria. This, combined with the continuing rust threat, means we’ve switched our emphasis from prothioconazole-based T3s to strobilurins partnered with less-costly azole co-formulations.

As feared, we had a serious battle in some areas with orange blossom midge on non-resistant wheats in near-perfect (for them), warm, still conditions. So much for needing significant rainfall to trigger emergence.

Brackling risk
Also faring well despite the dryness are our spring barleys. Our main concern here is the brackling risk from a surge in upper internode growth with the June rainfall. We couldn’t risk a late plant growth regulator on stressed crops in the hot, dry weather, but using an SDHI at T2 will have helped.

Even so, we’re more conscious than ever of the need to prioritise harvesting over wheat before there is any chance of significant head losses.

Just like the barley, some decent June rain will be much appreciated by our spring peas and beans, which are also looking promising despite noticeable problems from aphids, weevils and beetles.

Insect pests are definitely getting worse with today’s milder winters and warmer springs. They are becoming as much of a challenge to manage in pulses as flea beetles are in OSR. And, with the switch in cropping prompted by cabbage stem flea beetle, I’m afraid we have to be prepared for worse to come.

Once again, desiccation timing will be a challenge with the oilseed rape we’ve brought through, courtesy of huge variations in pod maturity within fields.

To capture as much of the yield as we can, we’ll be placing particular reliance on a pod sticker this season. And we’ll be applying it 10-14 days before the glyphosate, where possible.

Yes, it’s another application. But we’ve found that going in earlier lays the crop down better while the stems are more flexible and the upper pods are less prone to shatter. This means less physical damage as well as shattering from the glyphosate pass.

By securing the pods, it also removes the temptation to go in too early with glyphosate; something we need to avoid at all costs for the greatest output, the least red seeds and the highest oil contents.