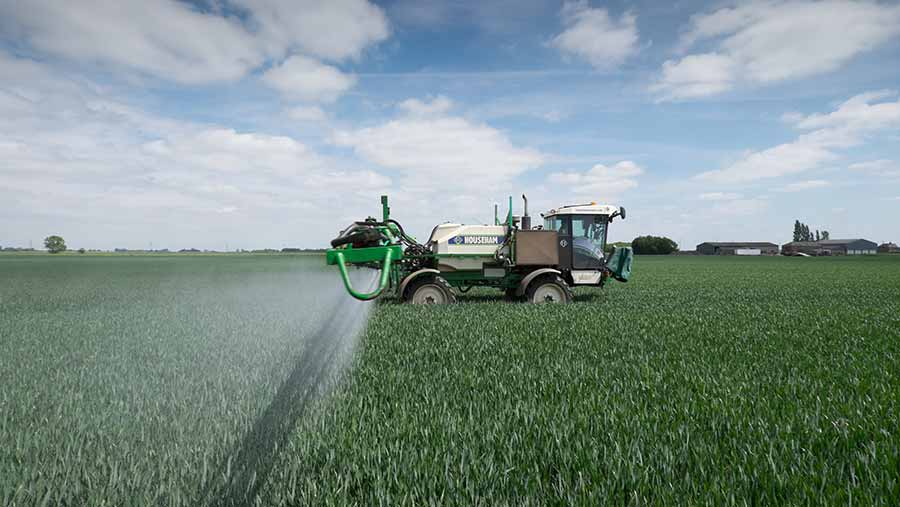 Yellow rust is being seen in some susceptible wheat varieties, especially the forward crops, and a rust-active azole is likely to be included in the T0 mix to keep on top of the disease.

For struggling cereal crops, early growth regulation applications will help enhance rooting in cereals, but they must be applied during a period of growth. Therefore, it is important to let crops recover from waterlogging or poor drilling first.

Oilseed rape crops are very variable, and in the South, surviving crops are at green bud/rapid stem extension. For those that warrant it, now is the time to apply a growth-regulating fungicide.

We have at last had some dry weather and the soil is slowly drying out. The dry, sunny conditions have certainly cheered everybody up, even though we now have other things to worry about. Farmers will, hopefully, be able to make use of their mobile isolation pods (tractors).

Crops are a mixed bag, really, with some approaching T0 and others still tillering. Some crops have now received their first application of nitrogen on the drier ground, but many are still awaiting ground conditions to allow this.

The more forward crops will be treated as normal with fertiliser and spray applications as expected, especially as many have septoria and yellow rust now clearly visible.

However, other backward crops will need some TLC with a gentle approach to fertiliser applications and plant growth regulator programmes to promote tiller retention and root enhancement.

Many will also receive trace element applications, which initially will be based on last year’s test results. These will then be tailored according to tissue samples taken in crops.

The winter crops that did receive an autumn herbicide are weed-free, but the crops that didn’t receive anything are very dirty now and these will need dealing with separately to any fungicide or growth regulator programme.

Thin crops
Many crops are very patchy or thin, and it’s been quite a dilemma to decide what to do with them. Do you write them off and start again, or try to make the best of what you have? There has been some very difficult decisions and days over the past few weeks.

It is never an easy decision to write a crop off, but it does predominantly fall on our shoulders to make that decision.

It’s going to be a busy time if it stays dry, as not only do the crops in the ground need caring for, but there is an awful lot of spring cereals to be drilled. This has started already on the really dry ground, but is still probably a few days away elsewhere, as there is water lying in many fields.

Everybody has a huge workload over the next few weeks if Mother Nature plays ball, so it’s just a case of keeping our heads down, getting on with it and staying safe.

At long last, spring is in the air and seed-bed preparation is the priority of the day. Most soils remain challenging and, where possible, cultivations should be kept to a minimum to avoid compaction as  subsoils remain wet.

Winter cereal crops are also demanding attention, as many look hungry and deficient in manganese, magnesium and sulphur. A readily available foliar phosphate can also fill the gap between the start of spring growth and soil temperatures rising sufficiently for the adequate release of P.

Given the winter we have had, an early-spring application of growth regulator and micronutrients will go a long way to help tiller and root development.

Late-September sowings of wheat are now close to leaf four emergence, and T0 applications of a multisite and/or azole fungicide are being planned.

Barley yellow dwarf virus is still a threat and, in most cases, a pyrethroid will be added to this mix. It is better late than never and can prevent localised infections from spreading into a bigger problem.

Oilseed rape
OSR crops that survived the cabbage stem flea beetle onslaught in the autumn are now at the green bud/rapid stem extension stage. For the crops that warrant it, now is the time to apply a growth regulating fungicide.

The addition of micronutrient products containing boron at this growth stage will aid healthy flower formation and boost the oil content of the seed.

Fertiliser programmes have started and, increasingly these days, we are using satellite images to create variable-rate spreading maps. Using imagery, we are able to measure biomass and assess crop health.

Decisions can then be made on a field-by field-basis whether more fertiliser is applied to the poor areas or, conversely, the good areas. Either way, the objective is to apply fertilisers more precisely, maximising the yield potential of the crop.

It can also be useful in helping identify the lower-yielding areas to focus on in future.

A long last, we are moving. Drilling and fertilising is taking priority, and we finally have some beans, oats and spring barley in. Some soils are still tender, though, and are at the back of the queue for drilling and cultivating.

Pre-emergences will primarily be on the spring beans and known bad blackgrass fields. I am more cautious with pre-emergence sprays in the spring, as I feel any potential crop check is more likely to transmit to a yield knock.

Seed-bed nitrogen will be applied to the spring barley and spring oats – again hoping to encourage rapid early growth.

Most winter crops have received their first nitrogen and only the rice paddies remain untreated. Winter barley and OSR crops will now be receiving their main dressing, with only a small amount held back.

The backward wheats are in the intensive care unit and will get another 40kg/ha of nitrogen to help them tiller. Not all is doom and gloom out there, as we do have some good wheats that are now starting to sit up and will justify a T0.

I am very concerned that the yellow rust I am seeing easily in many crops could really be something to watch. Past experience has taught me that chasing the disease is a fool’s game, so an early azole is likely to be in the tank mix.

Where autumn pre-emergence programmes were applied, they have worked well, but unfortunately many fields were not treated and these are a conundrum. Surprisingly, they are not rammed full of weeds, but they do have a mix of broad-leaved and grassweeds.

Try as I might to get enthusiastic about spring blackgrass weed killers, I know that the success rate will be disappointing.

If there was a flagship for integrated pest management, blackgrass would be mine. I would choose as my key weapons rotation, crop competition and drilling date before even considering an agrochemical.

Winter barley
Winter barley crops are now losing their over winter yellow and starting to grow. Crops that had no weed control in the autumn provide their own challenge, as weed control, growth regulation, disease control and manganese can mean a complex cocktail of products.

I attempt to split these over two spray applications and the sheets have been left for the first growth regulators, manganese and weed control. The first fungicide will be due in the next few days and will be centred around prothioconazole plus an SDHI with slightly higher rates on the two-row varieties.

A side effect of less oilseed rape is that the pigeons have fewer fields to graze. Therefore, they are having a real feast in the few remaining rows.

Crops range from 5cm across, to stem extended and 60cm tall. Light leaf spot can easily be found on susceptible varieties and some low-rate tebuconazole has been applied. Most crops will receive a spray at petal fall, and although sclerotinia will be the trigger disease, a broad-spectrum fungicide will be used.

The winter beans look tremendous, and once again I start wrestling with the decisions about controlling broad-leaved weeds that have survived the pre-emergence.

Bentazone is the go-to product and I have battled with its use for many years. Will it work? Will I damage the crop? Have I followed the water stewardship guidelines? Sounds like another reason to self-isolate.

In what are globally concerning times, the essential nature of food production has been starkly highlighted as supermarkets struggle to cope with excessive demand.

To protect everyone’s health, it is important that all of us involved in food production take responsibility and change the way we work to reduce risk as much as possible and keep vital production going.

As an agronomist, I am fortunate that field walking requires no close contact with people and I will be holding the face-to-face meetings I usually have with farmers by phone or video conference now.

Meanwhile, despite the virus, Mother Nature is carrying on and the land has begun to dry out, which has allowed field operations to begin in earnest.

Land destined for spring crops is being cultivated, and while the surface may be drying well, the effect of the wet winter is very much apparent at depth, so fields are being individually assessed whether they will travel or not to avoid unnecessary additional damage to the soil.

Hopefully, spring crops will establish well and as winter crops start to move, both should be able to tap into these moisture reserves later in the year.

­The growth of winter crops has been slow as a result of the wet weather and later sowing dates.

Growth ranges from stage 13 to some more forward crops that are beginning to reach GS30. While, the T0 spray does not have a defined growth stage, the target should be leaf four.  Look to treat approximately three weeks prior to T1 (GS31-33).

Yellow rust
The T0 is focused on yellow rust control, which is apparent in a number of susceptible varieties – for example, Kerrin. If active yellow rust is present, a rust-active azole will be required (tebuconazole or epoxiconazole).

Chlorothalonil can also be applied to offer septoria protection and as part of a resistance management strategy. 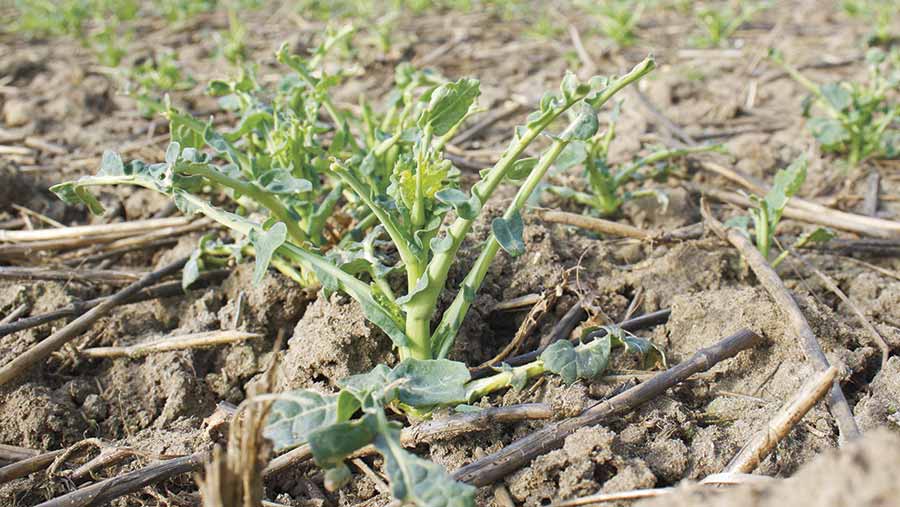 However, to ensure the benefits from this, growth regulators need to be applied during a period of growth and it is, therefore, important to let crops recover from waterlogging or poor drilling first. Late-drilled crops can be further supported in rooting with the addition of phosphites before growth stage 30.

Forward crops are beginning to reach yellow bud stage and should quickly reach flowering, consequently avoiding issues with pollen beetle. Backward and struggling crops will need to be monitored once temperatures increase.