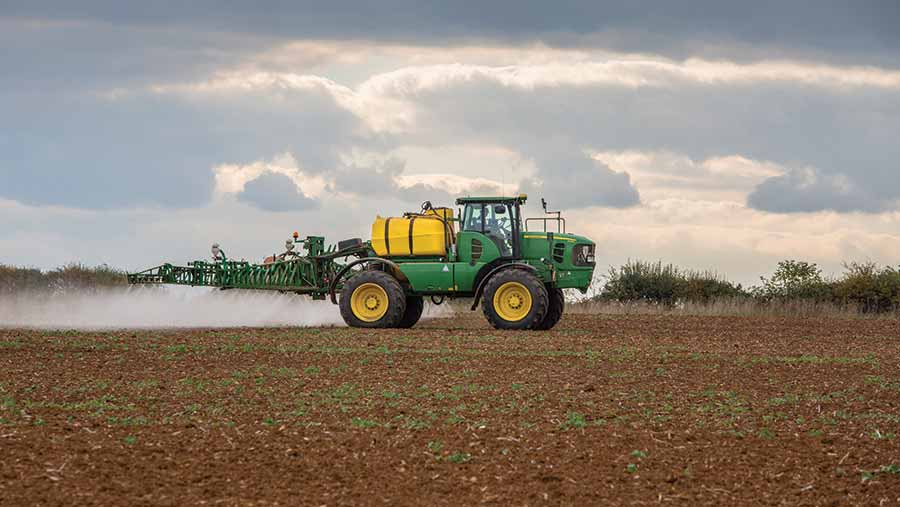 There has been no new mode of action herbicide discovered in the past 20 years and with none on the horizon, combining chemistry with cultural methods will prove vital for effective weed control.

“In fact, we are seeing the opposite and are losing actives due to legislation,” says Jorg Ellmanns, head of soya bean and corn herbicides at Bayer CropScience. “This leaves fewer solutions for weed control.”

This is happening at a time when demand for food is set to increase, with a predicted 30% increase in the global population by 2050.

See also: How glyphosate-resistant weeds will infest all US crops by 2020

“Globally, 14% of harvest is lost because of weeds and global resistance has increased by 60% in the last 15 years. Lack of innovation and the tightening regulatory environment means there needs to be a more holistic approach,” he says.

This is because resistant weeds are naturally present in populations in very low numbers. Applying a herbicide selects for these and over time, you will see increased numbers with continual use.

“As the numbers of weeds in the field increase, so too does the chance that one or more individuals are resistant. Therefore, farmers need to reduce weed numbers and they can’t use herbicides.”

This is where integrated weed management comes in, with the use of a combination of different agronomic practices to manage weed numbers. There are three different types of non-chemical approach:

1. Physical: This is based on weed disturbance and preventing germination, such as mechanical weeding, cultivation, flame weeding, seed destruction and mulching.

2. Cultural: This is affecting the weed’s environment by restricting light and nutrients, such as higher seed rates and cover cropping.

3. Biological: Promote populations of natural enemies such as enhancing habitat of seed-eating bugs.
There are many examples of cultural techniques that can reduce the reliance on herbicides and Dr Smith says it could be as simple as tweaking the design of a drill.

He points to work by Dutch and Brazilian researchers to reduce soil disturbance.

Crop residue can get caught on the coulters as the drill moves, thereby causing soil disturbance.

“You get bare soil which is the perfect environment for weeds to emerge,” he says.

They added a bar to the coulters to reduce residue clogging and then compared soya drilled with and without the modified coulter. Weed density and biomass was monitored across three different sites.

The simple modification led to an average 56% reduction in weed density. “This halved the total number of weeds to spray,” he says.

Taking an integrated chemical/non-chemical approach is especially crucial in the battle against blackgrass, which is not just a problem in the UK, infesting fields across Germany and France too.

A common pattern in all three countries is that the herbicide-resistant blackgrass problem has come on the back of a move to winter cropping and min-till cultivations.

In Bavaria, there has been a decline in spring cereals and legumes, with rotations now heavily based on winter oilseed rape, winter wheat and winter barley, says Klaus Gehring of the Institute of Plant Protection in Freising.

In 1980, herbicide resistant blackgrass was confined to the west of the state. Since then it has spread to virtually all regions of Bavaria. Mr Gehring blames this on a move to plough-free cultivations and simplified rotations.

However, the decline in efficacy is not as severe as in the UK. This is highlighted by Agrii’s Stow Longa trials site, a heavy clay farm in Essex. It has a cropping rotation of winter wheat, winter wheat and oilseed rape and has a significant blackgrass problem.

This article is based on papers given by global weed experts at the recent Bayer CropScience Weed Resistance Global Symposium in Paris.

The cost of a severe infestation is high, with yields being halved, rendering it uneconomic.
In the Agrii Stow Longa trials, the strongest factor is drilling date, with blackgrass control moving from 60% to more than 90% by delayed drilling. It also received a flufenacet-based pre-emergence and Atlantis post emergence.

“You can go from a crop full of blackgrass to one that is pretty clean simply by changing drilling date. It means there is hope for farmers, as they can get themselves out of a mess,” says Mr Foss.
Agrii work also looked at seed rates and variety choice to increase the competitiveness of the winter wheat crop.

There was a 45% fall in the number of ears/sq m by selecting a more competitive variety (Hereward versus Robigus) and drilling at 350 seeds/sq m instead of 175 seeds/sq m.

“That’s more control than a post-emergence herbicide at the site[Stow Longa],” says Mr Foss.
In the past two years, Agrii has been looking at barley, as it is a more competitive crop than wheat.

“In conclusion, there are two situations where we got sensible yields on the site. One is delayed drilling wheat, with yields of 9t/ha, or winter barley drilled early, which yielded 9-10t/ha. This compares with about 5t/ha of wheat in a severe infestation.” says Mr Foss.

“If you drill barley later, you see a yield decline. Therefore, you are better off with wheat which is more tolerant of later drilling.”

Agrii has developed a seed calculator which allows farmers to choose their wheat variety, sowing date, seed rate and select the expected level of pre-emergence control. The tool will then calculate the predicted population of blackgrass in the crop.

“It is an interesting tool that is helping in discussions with farmers and to drive debate.”

More work is needed to promote an integrated approach. Mr Foss and Mr Bonin agree that farmers often consider making changes when it is too late.

“You can’t convince growers to change their approach unless they are in real trouble,” says Mr Bonin.

Blackgrass not just a UK problem

A heavy reliance on autumn cropping and the move to min-till cultivations has seen resistant blackgrass and wild oats become a much bigger problem in France over the past four years.

Blackgrass is reducing yields by 30-50% on Denis Feriere’s farm south of Paris and has got to the point in some fields where crops are having to be destroyed, because there is so much blackgrass.

Resistance to sulphonylurea and fop and dim herbicides began around the fields and have dramatically increased in the past four years.

It has resulted in more than doubling herbicide spend from €60-€150/ha (£44-£110/ha) and a greater reliance on pre-emergence herbicides. He has employed cultural methods like ploughing, delaying wheat drilling by two weeks and choosing more competitive varieties.

He has seen a 30-40% reduction in populations when deploying these techniques together.