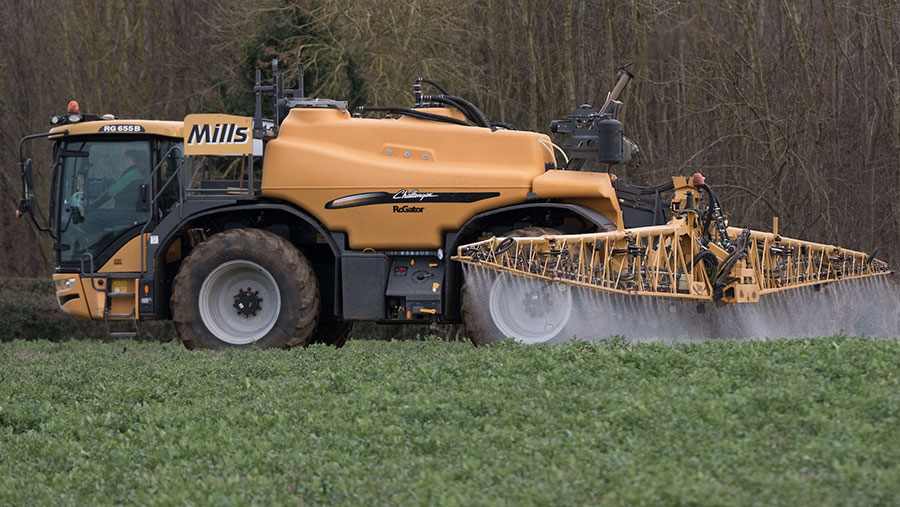 But overnight rainfall in large parts of the country means conditions are likely to be unsuitable for any last-minute applications of straight propyzamide such as Kerb or Astrokerb, warned Farmacy agronomist Ben Pledger, as there is a strong risk of the product being washed away.

The product label for Astrokerb (propyzamide + aminopyralid) advises the product should not be applied if field drains are running or if there is a risk of rain in the next 48 hours.

Mr Pledger said there have been pleasing control rates with the product among growers who applied it in good time in late November, despite “carpets of blackgrass” being seen in places.

He puts the success down to kind cultivating conditions last autumn which enabled fine seed-beds to be created without significant soil disturbance.

This caused blackgrass to grow from a shallower depth than normal and then good moisture levels enabled the herbicide to easily move into the weed rooting zone.

Wet weather and snowfall through December and January means there has been soil slumping since then, meaning water is now struggling to penetrate the surface, despite better structure deeper down.

Mr Pledger said this means growers will need to take great care with future herbicide applications this season to avoid them being washed away.

See also: How to assess and regulate oilseed rape crops this spring

There is still one month left to control blackgrass populations with carbetamide, and with some fields with high weed pressure showing secondary shoots, there may be a financial case to hit the yield-sapping weed again.

However, at a cost of about £35/ha for an application, he said this could bring herbicide control costs up to a total of £70/ha.

Growers under pressure from broad-leaved weeds in oilseed rape could be in for a difficult season if the weather remains mild.

Crops that have come through the winter well could advance rapidly through the growth stages and mean a very narrow or non-existent application window for Galera (clopyralid + picloram).

That’s because applications are not permitted until 1 March, but they cannot be applied to crops which have arrived at the green bud stage.

And with soil temperatures already higher than expected, Mr Pledger expects some crops are likely to miss the opportunity for later control of poppies, thistles and cleavers.

This would be a repeat of the situation in 2016, when an exceptionally mild winter saw forward crops in southern England hit flowering by February.