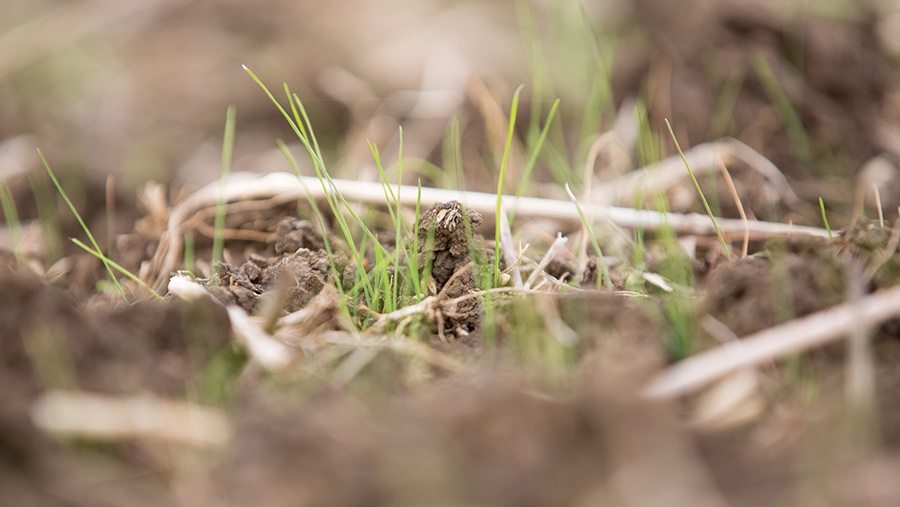 An early harvest means farmers can hit grassweeds even harder when establishing wheat, by making greater use of stale seed-beds.

This pre-drilling strike against weeds followed by a robust pre- and early post-emergence herbicide programme will ensure crops get off to the best start.

It is especially important as the efficacy of Atlantis (iodosulfuron + mesosulfuron) has fallen away because of resistance.

So how can farmers make the most of stale seed-beds and autumn herbicide stacks to get their crops off to a weed-free start?

As rain has now fallen farmers are going to see weeds germinating at quite a high rate, says Sarah Cook, research consultant at Adas.

She suggests that growers avoid cultivating soils after harvest as weed seeds need light to germinate.

“They also get predated if left on the surface, but if you cultivate them, you bury them and introduce a secondary dormancy – except with sterile brome and volunteer cereals. If you bury blackgrass seed, it can be dormant for five to 10 years, though you lose 70% of the seed burden a year.”

Chopped straw can also block light to seeds, leading to dormancy. So when chopping straw, some very light cultivations may be needed, she adds.

Growers should wait for the first flush of weeds and then shallow rake after spraying, to no more than 5cm. “This will kill anything that has chitted and will encourage further weeds to come up,” says Dr Cook.

“Do think about the weed seed bank and what older seeds you could pull up, compared with what you will be burying. Know how many weeds you had in the last crop.”

The early harvest this year may give growers further opportunities for extra weed flushes. “The more stale seed beds the merrier, and this year is ideal for minimum cultivations.”

The choice between glyphosate or strong herbicides such as Kyleo will depend on the weed burden.

“Kyleo is better on some weeds than others as it also has the active 2,4-D in it,” adds Dr Cook. It is effective on broad-leaved and grass weeds as well as oilseed rape volunteers.

“But the best weed control is from a vigorous crop, which is why good establishment is so important.”

Though shallow cultivations kill weeds, the advice with oilseed rape volunteers is to leave the seeds on the surface, so how can growers balance the two?

“Frequently farmers cultivate right after the combine has come out of oilseed rape, but as soon as you cultivate, the dry seed on the surface is moved down and two things happen.

“Firstly, you bury it, meaning it takes longer to come up in the wheat. Secondly, it moves down the soil profile into a state of dormancy, meaning it could come up in future crops.” 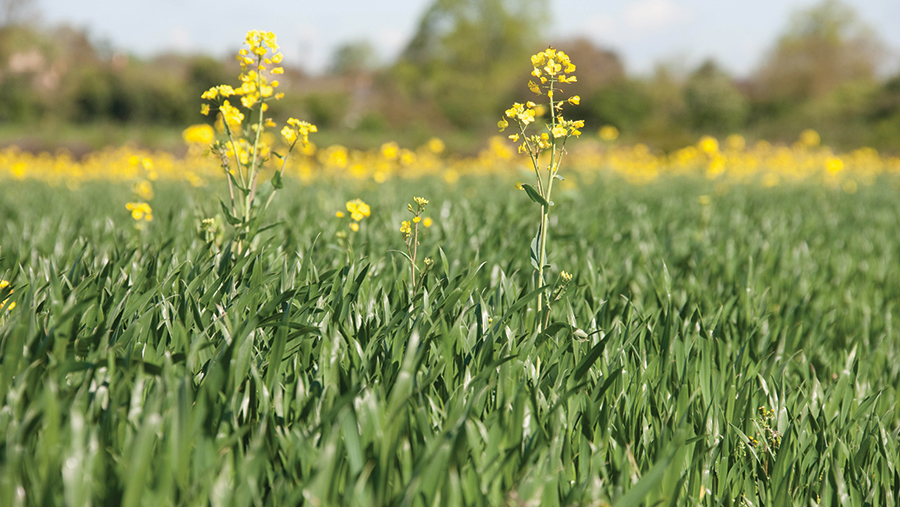 As oilseed rape varieties can be very different, ranging from high oleic, low linolenic acid (Holl) types to those with high erucic acid (Hear), volunteers could have dire consequences in terms of erucic acid contamination, he warns. “So leave seeds on the surface as long as possible.”

Volunteers should be allowed to reach cotyledon stage or one true leaf and then sprayed with 540g/ha of glyphosate active – a dose that will also tackle grassweeds. “The moment the volunteers grow or start tillering, go up to 720g/ha.”

So how can you tackle blackgrass at the same time? “The loss of rape and grass seeds to predation is a lot higher than we thought, so leave stubbles uncultivated for a month and then spray them off when the low dormancy seeds should have emerged.”

Once volunteers and weeds have been sprayed off, do a shallow 5cm cultivation to get seeds as close to the surface as possible, then press for good seed to soil contact, advises Mr Hunt. “It’s key to encouraging germination.”

Oilseed rape can often mask the weed burden, so it’s important growers take time to establish what weeds are hidden beneath the crop, he adds.

The temptation when tackling weeds is to head straight in with a robust herbicide strategy, but David Robinson, head of information and knowledge exchange at Frontier Agriculture, suggests growers look firstly at their cultivation approach.

“Crop protection products are the second line of attack. The first thing to ask yourself is how much work can you do with cultivations, drilling date and previous cropping choices.”

Identify which weeds are most dominant, he says. “Across the bulk of England, this is likely to be blackgrass, but from Northumberland further north, it’s probably other grassweeds including meadow grass.”

With many farmers experiencing an early harvest this year, the temptation may be to utilise this early drilling window.

“But the earlier you drill, the quicker the weeds will establish and larger they will become. These will be difficult to control, meaning you must react faster.”

Soil moisture is a key factor, this season especially. The nearer soil is to field capacity, the better residuals will work, says Mr Robinson.

In terms of seed-beds, it’s always better to drill into a good seed-bed slightly late, than into a bad seed-bed early, he adds.

“Just waiting those extra days can be so beneficial – as you are more likely to get the seed-to-soil contact that is needed.”

Another thing to consider is trash. This is more of a problem in dry soils as the trash will sit on the surface absorbing the residuals. “In dry conditions it’s very difficult to get trash cultivated into the soil and trying to do so could pull clods of soil up, which can cause issues with establishment.”

Mr Robinson highlights that there are no shortcuts with weed control.

“The moment growers start to think about cutting costs with herbicides, the battle against weeds is lost. Using 80% of the recommended dose and only getting 75% kill means you may as well have not done anything, because of blackgrass’s ability to compensate for gaps.” 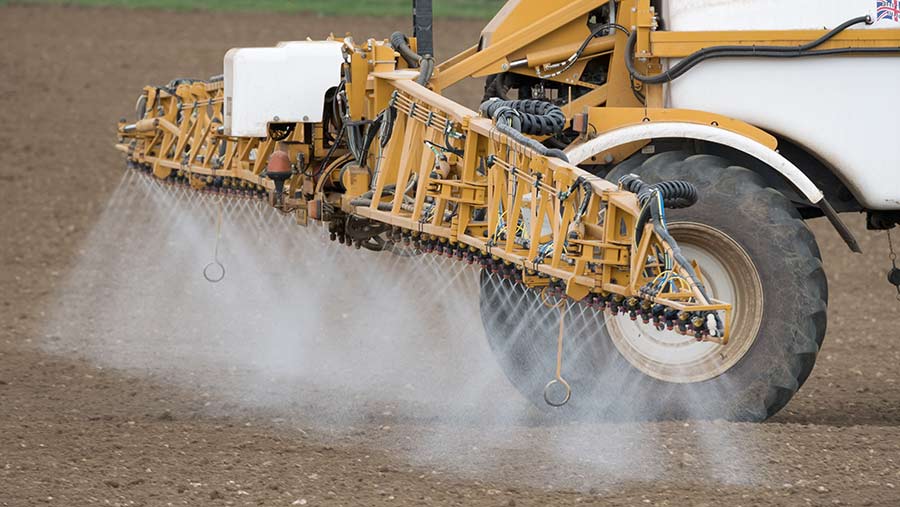 Stacking is an effective strategy: For many this will start with tri-allate at pre-emergence. “Aim for a total dose of 360g/ha of flufenacet, split or as a single dose and in addition look to use up to 2kg/ha of pendimethalin or 2kg/ha of prosulfocarb in the programme,” advises Mr Robinson.

“Most difficult grassweeds will need at least three residual actives split over at least two timings. Picolinafen and diflufenican are also important actives in the armoury.”

Growers should follow the pre-emergence with an early peri- or post-emergence application of either prosulfocarb and flufenacet or pendimethalin and flufenacet, adding in up to 100g of diflufenican. “Early emergence is when the weeds will be most susceptible.”

The key is using the appropriate rate, both to achieve maximum weed control and to minimise to risk of resistance developing.

The physical spraying application should be done as precisely as possible.

“When people are pressed for time, there is a temptation to drive faster,” says Mr Robinson. This creates air vortexes off the tractor around the sprayer, which inhibits optimal spraying.

The boom height should be controlled and held 50cm above the ground. “Keep it as close to the ground as possible and avoid it yawing from side to side – slowing down can make a big difference to this,” he adds.

Angled nozzles can also be a big help, especially for cloddy seed-beds, as they allow for spray to coat the clods from all angles – massively improving performance.

“Adding all these little gains together can make a big difference, taking you from a mediocre 90% control to a good 98-99% control.”

Though there have been no confirmed cases of glyphosate resistance in the UK, it is a very real threat that should not be underestimated or forgotten by farmers.

“But there is a real risk that misuse will lead to resistance. It’s not a theoretical warning – we can and will get glyphosate resistance in the UK.”

Key findings have shown that two well-timed applications between harvest and drilling is most effective to prevent survivors. After rain, expect a flush of big plants, which is an ideal opportunity to target the weeds.

Application rates should increase with the size of weeds to maximise efficacy, he adds. “Too low a dose on too advanced a weed could lead to resistance, so keep rates up.”

Glyphosate should not be relied upon as the only means of tackling a weed burden, he warns. Use cultivations and other herbicides in sequence, or mixtures – when recommended – to optimise control.

Monitor success and investigate quickly if you think you have resistance so you can do something about it, stresses Mr Clarke.

“Glyphosate is a vital component of any weed strategy, not the stand-alone solution. I believe we can prevent resistance but in the past we’ve often not done anything until it’s too late.”

For further information see the AHDB guidelines on glyphosate stewardship