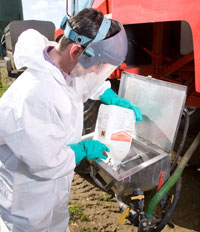 MEPs in Strasbourg have voted through new legislation for the approval and use of pesticides in agriculture, making it certain that large numbers of crop protection products will be removed from the market in the coming years.

After a two-hour debate on Monday evening (12 January), the full European parliament voted on the issue on Tuesday morning, accepting by 577 votes to 61 the compromise agreement hammered out with the French presidency before Christmas.

On use, the parliament accepted a deal that will forbid or severely reduce spraying near to schools, hospitals, public parks and recreation grounds. It will also ban aerial spraying and set new standards for training spray operators.

And while the deal falls short of setting specific pesticide reduction targets, member states will be required to devise National Action Plans to “reduce the risk and impact of pesticide use on human health and the environment”.

But the more controversial part of the package concerned the approvals process, introducing new cut-off criteria.

As a result of the European parliament vote, pesticides will be banned if they contain active ingredients that are carcinogenic, mutagenic, reprotoxic and endocrine disrupting. Persistent organic pollutants will also be banned.

A recent assessment by the UK Pesticides Safety Directorate suggested that about 15%-20% of existing pesticides will be lost to the market, as a result of the rule changes.

But the deal falls short of banning products that are neurotoxic or immunotoxic, as originally proposed by the European parliament.

Those products that are affected will only be banned once their current (10-year) approvals come up for renewal.

A derogation also means that, should there be no alternative product available to combat a serious risk to plant health, then a pesticide may continue to be used for another five years, even if it fails the above criteria.

A new zonal system will divide the EU into three distinct areas – north, central and south. If a pesticide is approved for use in any one member state, then it will automatically be available to all other member states in the same zone. This should help speed up the process of approving new pesticides.

German Green MEP Hiltrud Breyer, who guided the legislation through parliament, said the outcome was “a win-win situation, not only for consumer protection, but also for the EU economy, since it will lead to more innovation”.

But UK Conservative MEP Robert Sturdy said it would hit crop yields and drive up the cost of the weekly food shop. “We do need strong restrictions on pesticide use, but it should be based on sound science, rather than the whim of politicians,” he said.

He called on the British government to intervene as the package heads to the final stage in the legislative process – approval by EU agriculture ministers at their meeting in March.