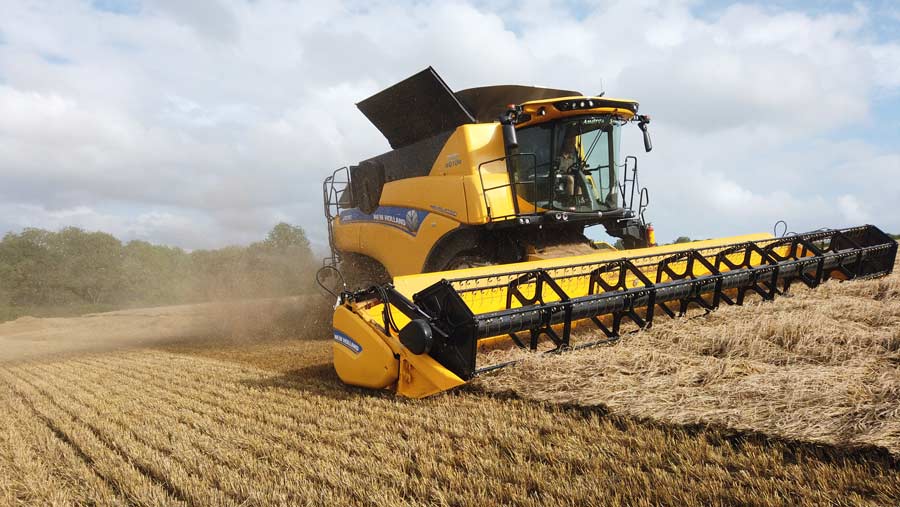 The spring barley harvest in the South West is proving to be challenging, with progress being hampered by the rain showers, as growers look to cut crops that have lodged because of thunderstorms in mid-August.

Rapid crop senescence resulting from a dry weather spell, coupled with hot temperatures earlier in August significantly brought forward harvest. Then wet weather shortly followed, making it difficult for growers to get crops off the ground before yield and quality start to significantly suffer.

Nevertheless, Devon grower David Down of Taw Valley Contractors, who farms 1,000ha near Barnstaple, has managed to successfully cut half of his 100ha spring barley crop.

So far, the crop of Planet has yielded well, at 6t/ha with good straw quality and moisture levels of 17%, which is coming off well given the recent wet weather.

“We would have preferred to get the crops off earlier, but due to the thunderstorms and rain showers, harvest was delayed and some areas of the crop lodged, making it difficult to combine,” says Mr Down.

See which varieties of oilseed rape, winter barley and winter wheat are the top yielders in your area by visiting our interactive yield maps. Click on each map to see the top five yielders from your nearest AHDB variety trial site.

Given the circumstances of extreme rain showers, the crop has held up well, especially as flash floods took place within the local area.

An application of glyphosate was applied to the crop two weeks before harvest to ensure crops were uniform for an optimum cut.

“We experienced a lot of secondary tillering so we were forced to spray off the crop with glyphosate in order to even up the crops before harvest,” says Mr Down.

It is expected that the flush of secondary tillers, which were particularly prominent across the South West this season, is due to the dry spring conditions. This caused crops to progress through their growth stages quickly.

Predominantly arable land, with a mix of organic and conventional cropping with grassland for silage and haylage­.

Then, as plants witnessed surges of moisture they were able to access more nitrogen in the soil profile, which allowed the development of additional tillers later on in the ­season.

He also notes that the glyphosate application weakened the crop’s stem, making it more prone to lodging.

All of Mr Down’s grain will be dried and sold as feed barley, while all straw will be baled.

Some straw is already sold straight off the field, with the remainder sold to local farmers for bedding and feed, which is in good demand this year.

As unsettled weather conditions are still forecast, it looks likely that harvest will continue in a stop-start approach.

The planting of 100ha of spring barley was never the intention for Devon farmer David Down, who farms near Barnstaple.

Like many growers across the UK, the wet autumn forced cropping plans to change as winter crops did not get the chance to be sown.

“We didn’t plan on growing any spring barley at all this season but our winter cropping area planted fell, so we had to change to a spring crop instead,” he says.

This large swing to spring cropping is highlighted in Defra’s provisional arable crop area figures, which show a 79% jump in spring barley to 795,000ha. This has resulted in a later harvest, with spring barley accounting for 76% of the total barley area this harvest compared with 53% for harvest 2019.