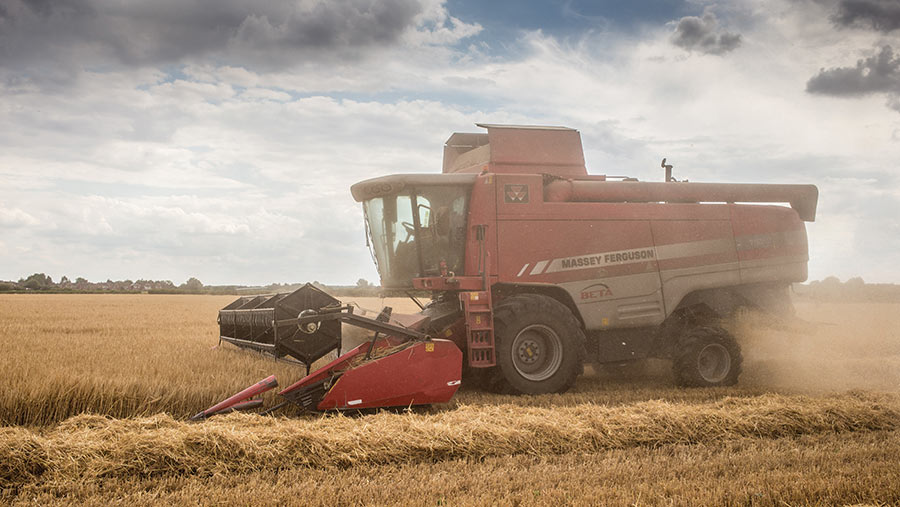 The spring barley harvest has kicked off in Scotland, with crops meeting malting specification, while in East Anglia, it is a different picture altogether, with nitrogen contents through the roof.

Spring barley harvest has just started in Scotland, with early signs indicating it will be a good crop, according to Robin Barron, general manager at East of Scotland Farmers.

“Quality is so far meeting spec, with nitrogen contents averaging 1.45% – but it is just too early to say on yields.

“These early crops are off light land, but in another week we will get a much bigger picture of how it’s doing,” he explains.

“The weather has moved into an unsettled spell and this is the week we should be ramping up harvest and going full bore as the crop has ripened.”

“We have some winter malting barley that averaged 1.68% nitrogen – and so made the grade for brewing – and yields were okay, but not barn-busting like last year; overall, malting and feed varieties averaged 7.7t/ha.”

Oilseed rape averaged 4.2t/ha, but not everything has been moved off farm yet, with harvest estimated at more than 90% finished.

Winter barley has been shocking, with yields anywhere between 3.7t/ha and 6.2t/ha, averaging 4.9t/ha.

Quality is also poor with specific weights in the upper 50kg/hl levels, with some up to 66kg/hl.

Oilseed rape has been mixed, with some farmers pleasantly surprised, but other crops were a complete disaster, says Mr Hess.

Yields ranged from 2t/ha to 3.7t/ha depending on the land and flea beetle pressure.

“Rain has slowed everything down now. It will be early next week before combining starts again.”

Heading across to East Anglia, the Midlands and the Cotswolds, wheat crops are variable, according to Philip Darke, operations director at Camgrain.

Spring barley harvest is two-thirds complete with yields between 4t/ha and 6t/ha, but nitrogen contents are through the roof due to below average yields, adds Mr Darke.

And when there’s an oversupply in the market, the higher-nitrogen stuff is going straight in the feed bin.”

Winter barley yields ranged from 6t/ha to 9t/ha, but most was at the lower end.

Oilseed rape averaged 3.1-3.7t/ha and fields are now being drilled with next year’s crop.

“Lighter land suffered from the dry spell in May.”

“Specific weights are as high as 83kg/hl, but usually these and the yield tie in together.”

Grafton produced the best specific weight at 83.5kg/hl, while Graham and Skyfall have both performed well, according to Mr Collins.

Oats have struggled this year, with specific weights coming in light.

“The aim is to hit 51kg/hl, but farmers have been struggling to get that.

“There are an awful lot of small, chaffy oats out there.”

Winter barley did reasonably well, but yields weren’t high and oilseed rape has been a nightmare, he adds.

“The quality isn’t bad, but the amount people are getting is just short.”