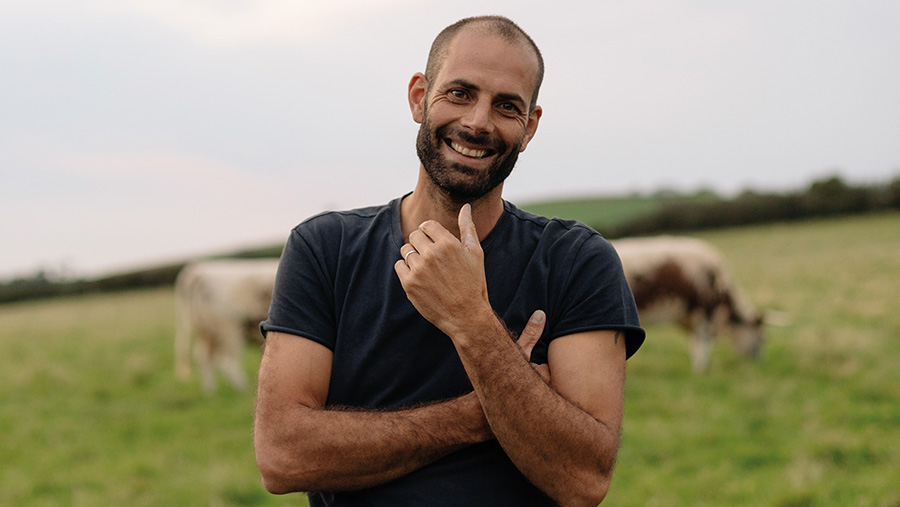 Contract farmer Tim Williams has started on his regenerative farming journey with the aim of becoming net zero in just five years, as part of a National Lottery-funded project.

The Farm Net Zero project is investigating the transition of an intensively cropped and cultivated arable farm into a fully functional regenerative agricultural system.

It will track how soil parameters have changed at the farm, which forms part of the Anthony Estate.

He also plans to direct drill a mix of multi-varietal population winter wheat into the herbal leys, with no artificial fertiliser applied. Instead, he will rely solely on biological soil interactions to successfully grow the crop of wheat.

Originally from New Zealand, Mr Williams has a firm interest in regenerative agriculture and has dived head first into the project.

He hopes to find out how rapidly he can promote soil organic matter and biology levels, across the whole 120ha commercial farm where he has worked for the past 12 months.

“Intensive arable inputs and cultivation can lose soil functionality and stress soil biology. We aimed to bring a wide range of crop diversity back to the farm, with different root structures capable of increasing photosynthesis rates, pumping biology and capturing as much carbon as possible,” he says.

A super-diverse herbal ley forage mixture incorporating 30 species of clovers, brassicas, vetch, herbs and grasses was planted into 50ha of previous arable ground in August last year, at a seed cost of £157/ha, with another 45ha being planted again this season.

To recover soils after intensive cropping and cultivation, Tim Williams aims to improve: 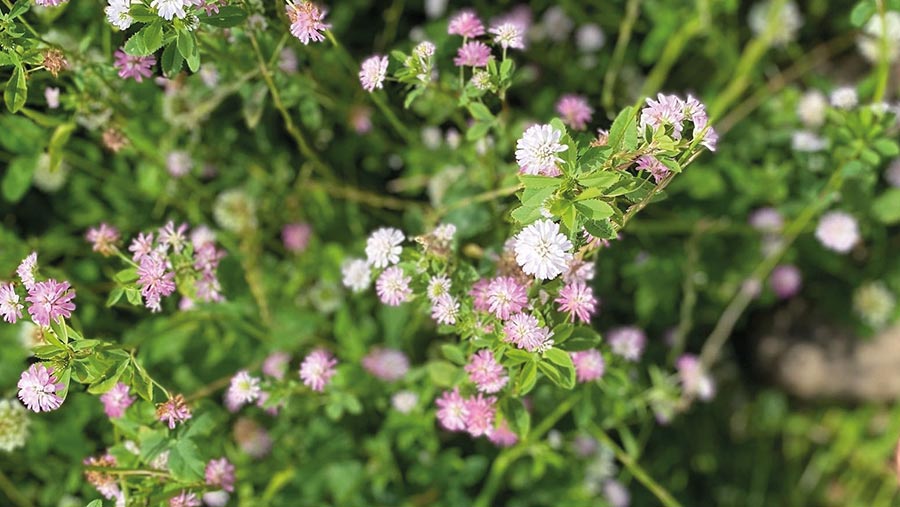 The next step was bringing livestock back on to the farm. With experience in managing 800 head of beef cattle down under, Mr Williams initially planned for 250 cattle, but challenges with farm logistics, weather and TB prompted him to scale back to 120 instead.

Together with the diversity of crop biomass both above and below the ground and the mob grazing of livestock, the biological action of soils greatly improved in just one year, with visual soil structural differences.

What’s more, the herbal leys offer a wide range of benefits, including  a natural progression of cropping that differs throughout the year.

“The incorporation of tillage radish into the mix helps improve soil structure. When the leaf is eaten, the crop’s energy is channelled to the roots, which breaks up compaction. Chicory and plantain offer further benefits due to their natural anthelmintic properties, which reduce pasture worm burdens,” Mr Williams says.

A couple of slight tweaks have been made to some mixes, with the removal of chicory and the addition of annual grasses replacing perennial ryegrass in fields destined for arable ground, in a bid to reduce potential grassweed pressure. 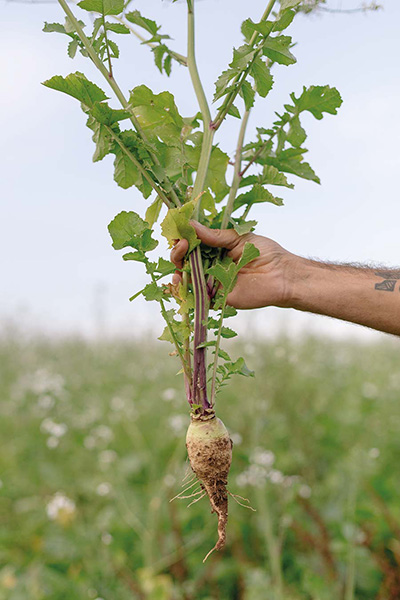 Next, Mr Williams plans to direct drill multi-varietal population wheat into the herbal ley, which will ultimately form a permanent living mulch understory.

Hannah Jones, carbon advisor at the Farm Carbon Toolkit, explains that: “The quasi-perennial system will provide deeper rooting and a wider range of genetic and phenotypic capabilities, which will help tailor crops to unique soil conditions.”

These days, modern wheat varieties are closely related and grown in a monoculture with limited diversity, she explains. Growing a mix of older, more genetically diverse varieties and saving seed on farm will allow populations to evolve over time.

“For example, if farm conditions are more suited to a deeper-rooting variety, this will yield higher. Saved seed will contain a greater proportion of this variety the following year, meaning crops will slowly adapt to specific farm environments to make cropping more resilient,” she says.

To reduce ley growth prior to drilling, he has tightly grazed them and plans to disc out the chicory to reduce competition risks.

“Soil temperatures are currently too high. You ideally want a soil temperature of below 10C to disc out the chicory successfully, then I will flail the remainder, before going in with the Uni-drill,” he says.

A 25ha area will be planted and sold to Wildfarmed as a high-value bread mix, with plans to double this area next year. Mr Williams hopes to maintain the herbal mulch as a permanent cover beneath the crop, without the need for reseeds.

Another highly effective method of introducing biology back to the soil is a home-brewed climate compost, which is used as either a compost tea, seed primer or direct soil amendment at Erth Barton.

Initiated by aspiring compost company The Land Gardeners, the material, which is high in organic matter, is created in aerobic conditions to promote the rapid build-up of biological populations.

“It’s all about optimising the nitrogen-to-carbon ratio and extracting the biology from the compost and then applying this as a liquid – not about the physical biomass of the compost,” explains Mr Williams.

Eight to 10 weeks after creating the compost, Mr Williams places 40kg of this into a brewer with 800 litres of water plus a feed source, and aerates it for 24 hours.

He then uses an intermediate bulk container mounted on a trailer and pulled by a truck to spray the liquid via wide-fit nozzles at 200 litres/ha to both arable and herbal leys.

A trial investigating the impact of compost applications is currently under way, with soil organic matter, aggregate stability, soil structure and a worm count measured and compared.

Compost is also coated on seeds to create a biological microbiome, which increases germination and photosynthesis rates. Before drilling, seeds are are combined with 5-10kg/ha of compost for 24 hours.

What is Farm Net Zero?

Farm Net Zero is a five-year project, investigating the contribution that agriculture can make to net zero.

Funded by the National Lottery, Erth Barton is one of three demo farms across Cornwall and aims to help farmers improve economic efficiency, reduce emissions and sequester carbon.