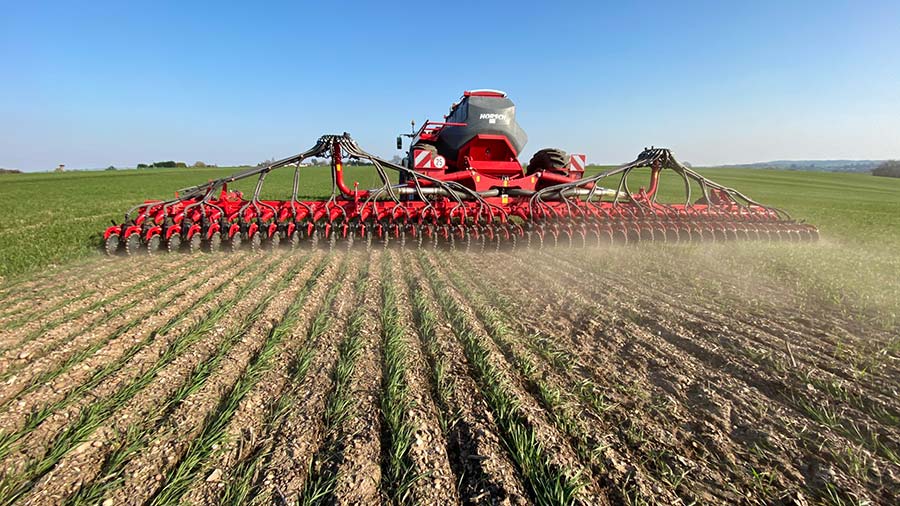 Finding other sources of nitrogen – preferably those that are beneficial for the soil and the environment and make a contribution to sustainable farming systems – is a priority for farmers looking to reduce inputs.

One method under investigation is the use of a permanent clover understorey acting as a living mulch, helping to protect the soil and suppress weeds as well as accumulating nitrogen and increasing soil fertility.

At the Groundswell event, an update on the work being done by a group of arable farmers through an Innovative Farmers Field Lab confirmed that the technique offers promise, although questions still need answering and more results are awaited.

See also: Is undersowing cereal crops with clover the next big thing?

As Dominic Amos of the Organic Research Centre explains, integrating a fertility-building ley within cash crops hasn’t been widely used in conventional arable systems to date, mainly because of the competition that occurs with the cash crop.

“The ideal situation is to get suppression of weeds, but not too much competition for the wheat or cereal crop so that there’s a yield penalty,” he says. “Getting that balance can be difficult, which is why the practice hasn’t been commonplace.”

Reducing that competition by grazing it with sheep in one possibility, he adds, while inter-row mowing is another option.

Mr Amos adds that there are two key services that a living mulch needs to deliver for productivity reasons; weed control and nitrogen supply.

“We know that they can do both. However, the amount of nitrogen made available to the cash crop and the level of weed control achieved are influenced by its management and the season. That’s why we’re doing these farmer trials.”

The farmers involved have used a mix of wild white and small-medium leaf clover, established by undersowing into cereal crops in spring 2020.

Where successful, the next cereal crops were direct drilled into the established stand in October – with winter oats and rye selected for their competitive abilities.

“There are differences between the way the clover has grown in these, due to the light levels. The crop responds to clover by expressing apical dominance and tillering less, so there are trade-offs.”

For conventional no-till farmer Clive Bailye – one of the participating farmers – growing his own nitrogen makes sense.

Having operated a regenerative system on his all-arable farm since 2008, Mr Bailye is keen to reduce his dependence on synthetic nitrogen for sustainability reasons and find other ways of feeding his crops, while maximising rotational diversity.

“With no livestock in the system, we will have to look at how to manage the clover once it is there,” he says. “That might mean mowing it or using low rates of glyphosate to check it, so that it doesn’t compete too much.”

His first year was a complete failure as the clover failed to establish on his very light soils in what was a very dry spring.

“We tried to establish the clover in a field of winter wheat in May 2020, but it was too dry. Clover needs moisture for a successful start.”

Spring 2021 was different. He managed to establish it in both winter wheat and winter barley and is looking forward to next year, when he expects to learn more. 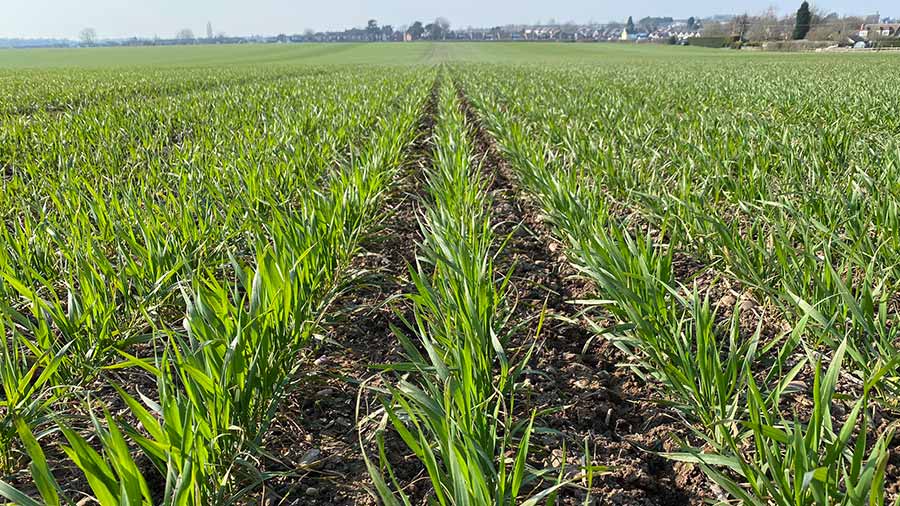 The clover provides nitrogen and supports biological diversity, and also acts as a mulch to suppress weed competition © Clive Bailye

“We’re hoping that it might be able to go all through the rotation. We will need to learn how to get it to release the nitrogen at the right time and how much it is producing, so that we can amend the amount we have to apply.

“For now, I am sticking to normal N timings, as I want the crop to grow away in early spring.”

The weed control issue is a lesser one, as his commitment to no-till has helped reduce weed pressures and herbicide use has already reduced.

Looking ahead, he wonders whether a living mulch might work with continuous wheat, acting like a quick cover crop would and breaking the take-all cycle.

Having run an organic system for more than 20 years, Shropshire-based Mark Lea admits that he was very pessimistic when he started the trial.

Weed control is the biggest issue on the farm, which, along with the need for cultivations, is why organic no-till has never been an option. As a result, he wasn’t expecting a living mulch to be the answer.

“As an organic farm, we undersow with clover all the time,” he says. “My two biggest concerns with a living mulch were the possible yield penalty and how we would cope with perennial weeds. 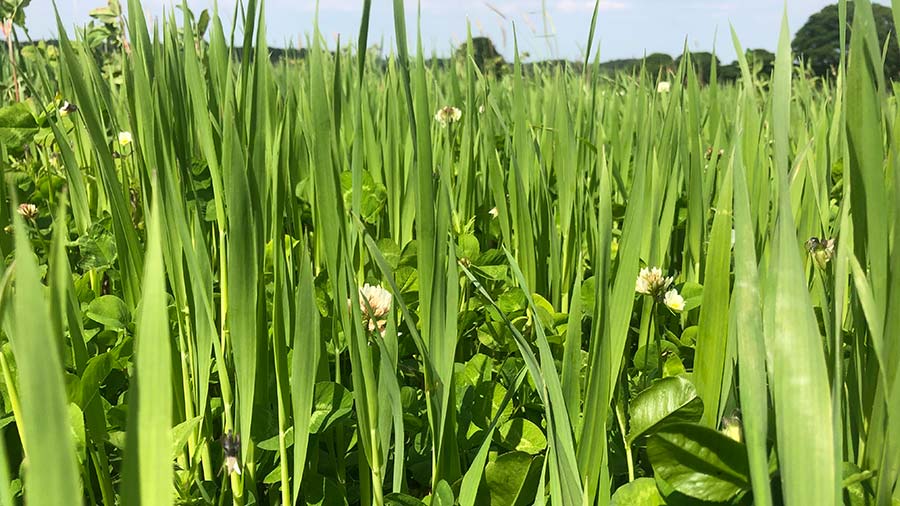 “On the plus side, by undersowing one crop and direct drilling the next one, it allows us to reduce the amount of ploughing.”

In 2020, he established the trial clover mix in two fields – one of spring wheat and one of winter wheat. It fared better in the spring wheat, where it germinated in June. The Heritage winter wheat, with its greater amount of cover, was a sterner test.

The fields were then grazed with sheep in October, after harvest, so that the following crops of rye and winter oats could be direct drilled.

“My worry is the potential yield penalty,” says Mr Lea. “Both crops got away very well, with the rye being very vigorous early on and the clover in it having smaller nodules. The oats extended later and, with more light getting through, the clover seemed happier.”

Whether crop competition suppresses clover nodulation remains to be seen, he adds. “The rye may have grown at the expense of the clover, which does need light to thrive. It was much darker beneath the rye canopy.”

With sheep on the farm, having a crop of clover in August after harvest is useful and means that he has an established clover ley for the winter.

“That’s better than an annual sown cover crop,” he points out. “If it comes with a 0.5t/ha yield penalty, I can live with that on the money saved and the non-costed benefit.”

As spring oats are a good crop for the farm, Mr Lea is wondering whether a living mulch would do away with the need for either a non-cereal break crop or a fertility building break – potentially changing organic rotations.

“We will have to alternate spring and winter crops for weed control reasons, but I am much more optimistic about the technique than I was before the trial started.”

If a living mulch doesn’t appeal, other ways of reducing artificial nitrogen fertiliser applications include:

Inhibitors – these help to either reduce ammonia losses or reduce leaching losses, by delaying or slowing down the processes that occur when urea is applied and is converted to ammonium and then to nitrates

N-Tester – a hand-held leaf nitrogen measurement tool which is used in a growing cereal crop to establish its exact nitrogen status, helping to fine-tune applications and improve accuracy.

Novel foliar fertilisers – the claims for products such as Poly N Plus are that they significantly reduce a crop’s total nitrogen requirement when used as part of a nitrogen programme, through controlled release and improved efficiency.